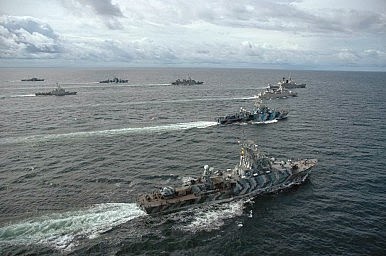 Indonesia has the potential to defend its maritime interests, but for now it will need a partner

Over the past few years, China has steadily increased its assertiveness in the South China Sea. Its most recent claim to fishing rights over most of this territory has given other countries in the region cause to worry that China may soon try to implement an Air Defense Identification Zone (ADIZ) across the South China Sea as it tries to assert its claim out to the controversial nine-dash line. This would put Chinese jurisdiction literally just off the shores of most Southeast Asian countries.

While all the countries neighboring China’s claims are worried about this threat to their sovereignty, few have the means to challenge it, especially on their own. Indonesia is perhaps one country that could do so with the help of a substantial ally. It also has the resources to fund a navy capable of defending its territorial waters. Nonetheless, it remains to be seen if Indonesia can harness its economic potential and transform itself into a substantial regional power.
There are already serious indications that China may try to establish an ADIZ over the South China Sea in the near future. A senior officer of the Chinese People’s Liberation Army Navy’s Military Academy, Li Jie, tested the waters on February 21, in response to a statement from an American military source saying that China plans to implement an ADIZ over the South China Sea by 2015. Li replied that the implementation was necessary for China’s long-term interests.

Both Indonesia’s GDP and GDP per capita have made robust gains over the past 10 years, with GDP increasing over 400 percent to $878 billion in 2012 and GDP per capita surging to $3,557 by 2013. The per capita increase happened despite the population growing by almost 40 million people. This would imply that the government has a healthy population and revenue base from which to draw potential military funds.

The oil, gas, and mining industries have been the main drivers of Indonesia’s economic success. However, these industries are not problem free, and some of those problems are of Indonesia’s own making. The country’s oil fields are maturing and have probably already passed peak production. However, the country’s gas reserves are still substantial, and its emerging coalbed methane (CBM) industry could prove to be extremely lucrative.

The problems with Indonesia’s primary industries are definitely limiting the government’s options for dealing with regional security matters. The oil and gas sectors have a stable regulatory framework that attracts investment, but maturing fields and increased domestic consumption mean declining profit. Oil and gas contributed 22 percent of government revenue in 2011. If that number goes down then either a new source has to be found, or services (military) funding declines. Indonesia is already squeezing as much government revenue from this source as is prudent, with an effective tax rate of 44 percent in 2013. With oil production declining, natural gas will be relied upon until the next significant energy source can be developed.

With an estimated 6 percent of global reserves, CBM is set to be the country’s next big driver for energy investment. These CBM reserves are estimated to be twice the size of its natural gas reserves. This industry is, however, still new. State-owned Bukit Asam claims its Tanjung Enim site will produce enough CBM daily to power a 200MW power plant by this year. However, a deal with a utility company is still forthcoming. Even with a favorable regulatory market and geological formations, this industry will not become a significant part of Indonesia’s economy in the near future.

The regulatory climate surrounding Indonesia’s mining industry poses another large problem. A controversial 2009 mining law came into effect piecemeal on January 12, requiring companies to refine minerals within Indonesia instead of shipping ore after it’s initially extracted. The goal is to keep mining profits within the country instead of exporting the country’s wealth. However, most major foreign companies are extremely worried about the uneven application of the law across commodities, as well as ambiguity as to whether prior contracts will be affected.

Two of the largest mining companies in the country, Freeport and Newmont, claim the law could force them to lay off thousands of workers and cost billions in lost export revenue. They are threatening to take their claim that previous contracts supersede the new law before international arbitration. Compounding the problem posed by the new law are weakening commodity prices and a lack of infrastructure to refine and bring minerals to market. The mining sector tax income target was $90.5 billion for 2013, but as of September only $56 billion had been collected. The state mining sector raised $3.37 billion for the same time period, a 25.7 percent decrease year-on-year.

A growing consumer class is another potential driver of Indonesia’s economy. This part of the population is expected to grow to 150 million people over the next 10 years. Not only will this further stimulate Indonesia’s economy, it is expected to be a stabilizing factor not dependent upon commodity prices. Some of Indonesia’s resilience to the U.S. Federal Reserve tapering of its easy money policy is already being attributed to this growing consumer confidence.
This base, if it does continue to grow, will become an important part of Indonesia’s economy. However, it will not translate into large budgetary gains for the government until the end of the decade at the earliest. Turning those gains into substantial upgrades to the navy would require a further five to ten years. That timeline means the government cannot depend on this revenue source to finance its immediate military needs.

Without the necessary budgetary freedom to commission a navy capable of defending its territorial waters, Indonesia is left with a few options for providing for its own defense. ASEAN has shown itself to be unhelpful in this regard, as even after China instituted its new fishing law, ASEAN was incapable of anything more than a statement recommending a diplomatic solution to the problem. Few other countries in the region have the naval capacity to work with Indonesia to provide an effective deterrent to aggression, with two exceptions: Australia and Japan.

Despite the difficulties surrounding Indonesia’s relationship with Australia, arising from foreign asylum seekers transiting from Indonesia to Australia and now reports that Australia spied on Indonesian trade deliberations with the U.S., neither issue is a strategic threat to their relationship. However, issues like this inhibit cooperation for as long as China’s assertive posture isn’t overtly militaristic. Should China decide to implement an ADIZ over the South China Sea, the relationship could change. Australia does not have any territorial claims in the South China Sea, but China asserting itself militarily over large swaths of the world’s most valuable sea lanes, carrying 50 percent of global oil tanker shipments, is a threat to Australia, especially as it brings its large natural gas reserves completely online and increases exports.

Unfortunately for Indonesia, the strain in this relationship means that an alliance with Australia would likely need to be precipitated by an incident large enough to align their interests. Such an event may mean that any alliance would be too little and too late, as China may have already dictated the course of events and seized a strategic advantage.

Japan has much more immediate and strategic reasons for helping any Southeast Asian nation counterbalance China. The recently implemented Chinese ADIZ in the East China Sea and the dispute over the Diaoyu/Senkaku islands have made Japan extremely sensitive to Chinese assertiveness. Japan is also nervous about the security of its own energy trade routes through the South China Sea.

However, Japan’s pacifist constitution does not allow for its Self Defense Forces to do anything beyond protecting its own territory. Prime Minister Shinzo Abe and the ruling LDP would like to change the constitution to allow Japan’s military to aid in protecting its allies. A change to Japan’s Article 9 would make a formal military alliance with a Southeast Asian nation extremely attractive. Yet the possibility that the Japanese government is able to change the constitution is not something that Indonesia can afford to hinge its military strategy upon, particularly given how controversial changing Japan’s military posture is both at home and within the region.

That leaves the U.S. as the only other country Indonesia could ally itself with in the near term that could substantially influence Chinese behavior in the South China Sea. The U.S. has told the Philippines it is looking to put more ships in theater. However, U.S. foreign policy is stretched by interests all over the world. A real push militarily into the South China Sea would require much more belligerence on the part of China than we’ve seen to date. Even a new ADIZ would not likely significantly change U.S. posture without a significant “incident” in theater to precipitate involvement. However much the U.S. emphasizes its “pivot” to Asia, that pivot by no means has to be immediate. In the short-term the U.S. can allow events to unfold as they will, and react accordingly in order to maintain its balance of power in the region.

This means Indonesia cannot fully depend on the U.S. to build a sufficient presence in, or even partnership with, the region before the sovereignty of its territory might be significantly impinged. Another regional actor with the same motivations and potential for loss from Chinese aggressiveness is necessary. Whether Indonesia can convince another country within the region that Chinese aggression warrants immediate action will be difficult, but it is the only option in the short to medium term.

Clint Richards is a Tokyo-based risk management and geopolitical consultant.