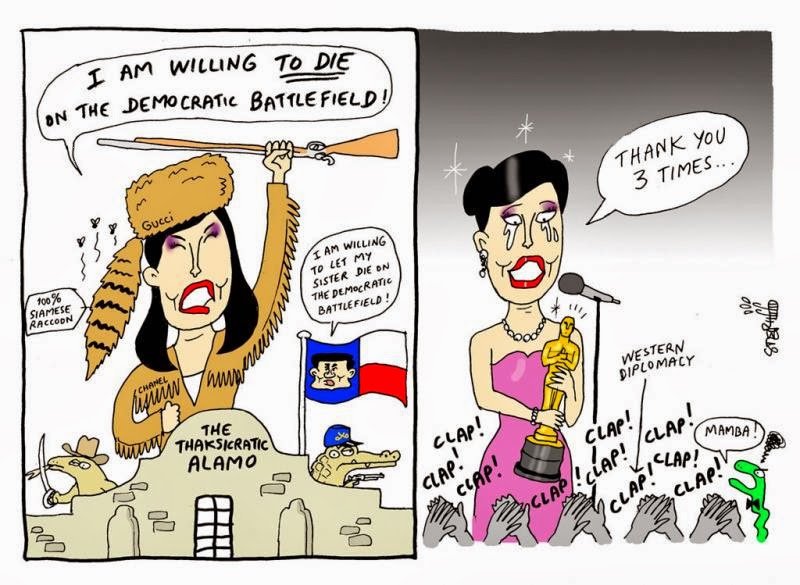 The root of the term kleptocracy is the Greek word kleptes, meaning thief. Kleptocracy is a form of government in which officials - the ruling class and the real "elites" - use their office to increase their personal wealth and political power by corruption and embezzlement of state funds. The robbery is done at the expense of the general population, under the false pretense of "democracy", and justified unconditionally by the fact that they are "elected" by the majority. Kleptocracy is the de facto political system of Thailand, not democracy.

In our country, the pilfering has been so rampant for so long that corruption has become de rigeur - the fashionable, popular behaviour in our value system. Schoolchildren and businessmen alike perceive it as a norm, acceptable as long as they do not get caught and if "some" people get some nominal benefit out of it.

Our "democracy" was never really rule-based, despite the fact that it should have been. We have rules, but they are always bent to the will of the ruling class. In our politics, and sadly in our society, money talks louder than rules. Money talks and criminals walk.

In principle, democracy allows all citizens, rich and poor alike, an equal chance on election day to shape their own and their children's future. But as US Secretary of State John Kerry candidly stated last weekend, elections do not necessarily lead to democracy, nor are they synonymous with democracy. Contrary to the perception of much of the Western media, the Thai protesters are not anti-democracy; they are protesting to root out a corrupt regime.

Last weekend, the honorary chairman of the Rice Millers Association disclosed that at least Bt8 billion in state funds under the shameless government scam known as the rice-pledging programme were sent by illegal currency exchange traders, mostly in Chinatown, to Hong Kong. Some of that amount found its way back to Thailand, obviously not into the hands of farmers, but unquestionably into those of the thugs who still call themselves the hoi polloi "proletariat" as they laughed all the way to the bank. The dirty money has been laundered clean. Case closed.

More elections mean more sophisticated vote-buying mechanisms. In the old days, "vote purchasers" would distribute banknotes torn in half to voters, who could collect the other half when the desired candidates won. Nowadays, money changes hands via gambling dens. Voters willing to pawn off their rights place their bets, then when the vote-purchasing candidate wins, they go to the den to collect their winnings. Some dens will issue "lottery tickets" to vote-sellers. If their candidates win, the voters with the winning lottery tickets collect their money.

During the campaign season, piles of cash are given to the canvassers, most of whom also wear elected local and national hats as officials, who will in turn keep their share. The Central Bank may boast it has a way to monitor the flow of large exchanges of cash. But in reality it cannot. In the cases where it did pick up the money trail, it chose to remain mum to stay out of trouble.

State enterprises have been an important means to siphon off money to government cronies. The government in power will appoint its own people to plum positions on the boards of these quasi-government entities. They then cast their votes in support of retaining "advisers" for projects initiated by their respective organisations. These 'advisers" either belong to the companies owned by politicians or their families, or they pay a big chunk of their fees to politicians. The cash delivery can come direct to politicians via the front as well as the back door, or indirectly via an intricate web of con artists, but it eventually ends up in the bank accounts of politicians.

There have been intricate policy corruption schemes whereby government projects are initiated to benefit companies belonging to politicians. More frequently now, the "bids" are rigged at the TOR (Terms of Reference) level. Confidential information, cartloads of documents on the technical as well as financial requirements, is given to the intended bid winners before the bid. This is done in broad daylight with the full cooperation of the government officials responsible for holding the bid-tender.

Officials appointed by high-ranking government officials must offer more than a onetime pay-to-play recompense, instead making regular "tributes" to the politicians who bestowed their high offices upon them.

Many office-seekers have to travel to Dubai to make their face seen and their offer heard.

In terms of the ultimate robbers of taxpayers, look no further than the Education Ministry, which receives the second-largest budget allocation (20.6 per cent of total budget) after the general administration expenditure (20.8 per cent). Thailand's education system is in tatters, at the level of both teachers and students. Thai students rank worse in many categories than their peers in other Asean countries. The teachers also flunk the standardised tests, even in the subjects they teach. Overseeing them is a ministry where procurement wizardry turns a Bt100,000 processor into a Bt500,000 computer. The same type of sorcery has turned the dime-a-dozen computer tablets that no longer work after one year into devices prized as much as the most commercially successful brands on the market. Overseas trips for teachers have become a way of paying off political favours, rather than for the enhancement of educational experience. For years, our tax money that has flowed into the budget of this ministry has not been used efficiently and productively, but embezzled in huge quantities. If education is so fundamental to a thriving democracy, and an important engine of our collective future, what does the sorry state of our education tell us about our democracy, and our tomorrow?

So the deafening excuse of our Dear Leader and her administration for their stubborn insistence on sticking in office - that they are defending Thailand's democracy - is a self-serving perversion. We have elections, and a simulacrum of a democracy, but we are not a democracy. The highway-robbery of our tax-money that has spread and taken root everywhere has turned Thailand into a kleptocratic nation. That's why protesters are calling for reform, before a new election. Without a reform, a new election is not going to turn our kleptocracy into a democracy, for there is much more to democracy than an election.

If there was nothing more to it, the world would have to prepare to hail North Korea's new democracy on March 9, when the country holds its general election. ‘The Nation’ Bangkok