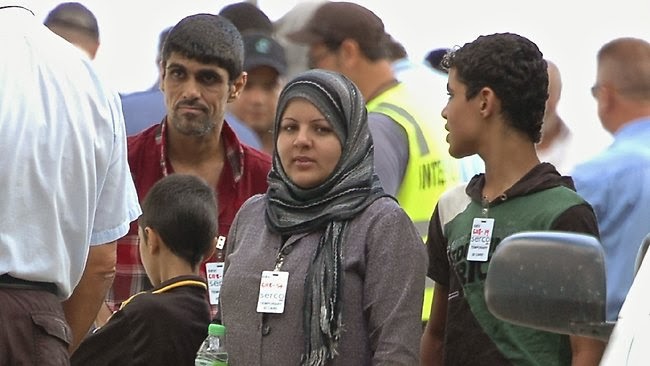 The Left is white with rage that Abbott has been able to stop the boats. It is blind to 1200 deaths at sea yet wide-eyed to New Guinean savages killing one Iranian on an island detention centre that Rudd reopened.

Detainees on Manus are the guests of Gillard and Rudd, not Abbott and the funeral of the one fatality served only to prove the “comfortable” Iranian family were country shopping and not "escaping persecution", as the Left claims.
Labor and its supporters, the Greens, GetUp, the ABC, Fairfax and the Guardian, are doing their best to scuttle the Abbott boat initiatives with attacks on the military and claims of covert secrecy.
The only reason the Lefties want to know what Abbott is doing is so they can scuttle it!
Morrison and Abbott are doing exactly what the Pickering Post suggested they do: Bribe the Indonesian military! A mere $60 million has changed the ball game and $60 million is a tiny fraction of the ongoing $14 billion the Gillard/Rudd fiasco was costing us.
One year ago the Post reported: “Gillard’s nonsense talk of regional solutions, expert panels and Malaysian swapsies shows she has no idea how Labor’s disaster of its own making actually works.
“Look at it this way; if someone has been paid to kill you it’s best to double his fee to kill the bloke who wants you killed.
“Abbott needs a discreet envoy to arrange to pay these (Indonesian military) crims more than they are being paid now and the tap gets turned off, overnight!
“And these payments need only be a tiny fraction of the cost to us of their illegal immigrants.
“Now, if you really want to stop the boats Tony, give me a letter of authority and I’ll have the deal signed and sealed within a week!
"No more boats.”
What the Post suggested Abbott must do to stop the boats here:
http://pickeringpost.com/story/abbott-can-stop-the-boats-/1188
And this “secrecy” nonsense is a furphy as Gillard also refused to allow journalists anywhere near detention centres. She kept critical information from Australians.
We weren’t allowed to know who or how many unprocessed illegals were, and still are, living among us.
She refused to divulge vital information regarding the Guillain-Barré syndrome disease introduced by detainees to the mainland that threatened and hospitalised Australian citizens. Enquires to Gillard's Office went unanswered.
Where was media's Left then?
Without the Post’s informants we would still be ignorant of the real reason the mainland Curtain Centre was closed.
There were murders that went unreported under Gillard’s cloak of secrecy. Under Morrison one murder is front page news.
This is what went unreported under Gillard's cloak of secrecy:
http://pickeringpost.com/story/it-s-curtains-for-curtin-detention-centre-and-they-won-t-dare-tell-you-why/992