The Melanesian Spearhead Group: What is it, and what does it do? 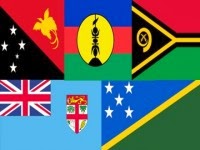 Today is MSG day. It is not a day to rejoice in the use of monosodium glutamate; rather it is in celebration of the Melanesian Spearhead Group. The MSG leaders at their 2013 summit in Noumea mandated the establishment of the day to be marked in each of the member countries. And so no one needs to feel left out, here is a beginner's guide to the MSG.

What is the Melanesian Spearhead Group?

The MSG is one of three sub-regional groupings in the Pacific island region. As its name suggests, it comprises the Melanesian countries of the South West Pacific, the ones closest to Australia. These countries comprise the vast majority of the population of the Pacific island region. Their economies, fuelled by resources, tourism and agriculture, are the most vibrant within the wider Pacific.

Its members are Fiji, Papua New Guinea, Solomon Islands, Vanuatu and the Front de Libération Nationale Kanak et Socialiste (FLNKS), a pro-independence movement from New Caledonia. Victor Tutugoro of the FLNKS is currently the chair of the MSG, having taken over from Voreqe Bainimarama of Fiji in 2013. The presence of a political group such as FLNKS is unusual and reflects the historical and political roots of the MSG. Newly independent Melanesian countries came together in a spirit of ethnic and cultural solidarity with an express commitment to working to ensure the liberation of their kanaky brethren. This was one of the main drivers of the signing of 'The Agreed Principles of Co-operation Among Independent States of Melanesia' in 1988.
In 2011 Indonesia was granted observer status at the MSG, a decision that was controversial at the time and which has had a disruptive effect since.

In 2013, the West Papua National Council for Liberation (WPNCL) applied for membership of the group. A decision on that application has yet to be made. There have been a number of twists and turns since June 2013 leading some to question whether this issue is undermining the unity of the group.

What is the Melanesian Spearhead Group's history?

The MSG was established in Port Vila on 14 March 1988 by the heads of government from each of the independent states and the leadership of the FLNKS. In 2007, the MSG was constituted as a formal institution recognised in international law and in 2008 it established a secretariat in Port Vila, Vanuatu. In 2013, it marked its silver jubilee with a range of events and activities throughout the sub-region.

The current director general of the secretariat, Peter Forau, points to the establishment of the MSG Trade Agreement as a landmark for the group and an indicator of its success. It was signed by Papua New Guinea, Solomon Islands and Vanuatu in 1993. Fiji joined in 1998.

How does the Melanesian Spearhead Group fit with other regional architecture?
The membership of the MSG largely overlaps with that of the Pacific Islands Forum. Three of the MSG countries are current members of the Forum (PNG, Solomon Islands and Vanuatu). Fiji is currently suspended from the Forum and FLNKS has no status at regional level (although New Caledonia is an associate member).

While it is certainly the case that the MSG is the most established and active of the three sub-regional groupings, its leadership is at pains to stress that it is not seeking to challenge or compete with the Pacific Islands Forum. A number of the key staff within the MSG secretariat have experience of working at the Pacific Islands Forum Secretariat and/or within other regional organisations, and this is reflected in similar approaches and processes.

What does the Melanesian Spearhead Group do?

In addition to the MSG Trade Agreement, there are a number of projects and activities underway within the secretariat and under the direction of the political leadership. There are several economic activities, including the development of a skills movement scheme to facilitate labour migration between member countries. At its most recent summit in 2013, the MSG took the innovative step of establishing a department of peacekeeping operations to explore opportunities for providing personnel from group members to UN peacekeeping missions elsewhere in the world.

In the political sphere, the MSG has established an FLNKS unit within its secretariat. This unit is working on a number of initiatives under the Noumea Accords that were previously within the remit of the Pacific Islands Forum Secretariat.

As part of research I undertook last year with Matthew Dornan of the ANU, we examined proposals for pooling of services that could be undertaken by organisations such as the MSG. These proposals include bulk procurement of pharmaceuticals, developing shipping services among member states, and tourism marketing to promote multi-country destinations. We found that there was scope for cautious optimism in relation to the MSG approach in this space, resulting from the recognition of the importance of good policy processes, and the (apparent) engagement of political leadership.

What are the challenges ahead for the Melanesian Spearhead Group?
The question of WPNCL membership has the potential to cause significant problems for the MSG. Vanuatu has adopted an assertive stance, which may sit uncomfortably with the position of the biggest members, Fiji and PNG, each of which have more significant relationships with Indonesia.

At a bureaucratic level, Peter Forau's term as Director General comes to an end this year. He is widely credited with having guided the secretariat through its establishment phase to the point where it is recognised as a significant contributor to regional conversations. Should he not continue in this position, the choice of replacement will be hugely important as to how the organisation moves forward.
‘The Interpreter’