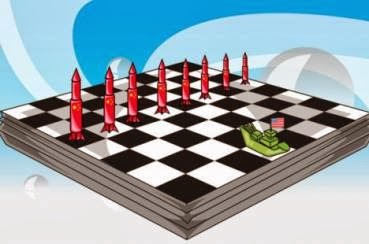 The current U.S. security posture in East Asia leaves it with few options should a crisis escalate

China and Japan are increasingly at each other’s throats. America wants to stand between them, but because of its military presence on Japanese soil, it can only actually stand behind Tokyo. As Japan develops independent, offensive military capabilities, an untenable situation is taking shape: In the future, the United States may have little control over the outbreak of war but a virtually automatic commitment to involvement in it. Instead, a more elastic commitment would give the U.S. greater leverage to restrain Japan and contribute in a balanced way to regional stability.

Faced with greater diplomatic pressure from Beijing and belt-tightening in Washington, U.S. allies like Japan have started to rearm in earnest. Asia is quickly becoming “the most militarized region in the world.” U.S. partners and allies in the region plan to spend 53 percent more between 2013 and 2018 than they did in the previous five-year period. Japan’s security posture in particular is undergoing sweeping changes. Last year, Prime Minister Shinzo Abe reversed a decade of cuts, seeking the largest increases in defense spending since the end of the Cold War.

This still unfolding story represents a substantial shift in burdensharing from the U.S. to its allies. After two major wars and the Great Recession, both major parties in the U.S. are happy to see others carry more of America’s global responsibilities. But in a world dominated by America for so long, there is something of an intellectual vacuum on how to approach multipolarity.

Several Washington think tanks have stepped into this void. The Federated Defense Project at CSIS, the Power Web at CNAS, and the Front Office/Back Office Concept at the Carnegie Endowment are examples. Each offers a new alliance concept that outlines how the United States can do more with less. They applaud the easing of the “free rider problem” and greater allied participation in shared challenges, while stressing that continued U.S. engagement and reassurance is essential. In other words, nothing fundamental will change in the switch away from the old hub-and-spoke model.

What no one sufficiently tackles, however, are the strategic problems of leading from behind in this way. Their Achilles’s heel is something most strategists by now take for granted: the deployment of U.S. troops on allied territory as a “tripwire” against aggression.

For seventy years, the United States has garrisoned soldiers and sailors in Japan, South Korea, West Germany and elsewhere. Their principal role is to ensure that we cannot help but be entangled in our allies’ security. The Defense Department’s 1995 East Asia strategy report states that a physical presence makes it “unmistakably clear that the United States would automatically and immediately be involved in any such conflict.” Political scientist Thomas Schelling was more morbid, but maybe also more candid when he wrote that the Berlin garrison was never meant to defeat a superior Red Army: “What can 7,000 American troops do, or 12,000 Allied troops? Bluntly, they can die. They can die heroically, dramatically, and in a manner that guarantees that the action cannot stop there.”

America is unique in having gone to such extreme lengths for the sake of extended deterrence. To convince enemies it would defend Tokyo as if it were Los Angeles, it purposefully gave up choice in the matter. If a war breaks out over the Senkaku/Diaoyu islands, it will embroil the U.S. not because of treaty obligations but simply because the proximity of U.S. forces makes abandoning Japan in any major conflict impossible.

The problem is that Japan also knows this, and China is not the only partner in this dispute with the ability to spark a war. Over the past two years, the provocative behavior of Japan’s right-wing government has raised the risks of Tokyo entrapping the U.S. in a conflict with China. In 2012, Japan escalated its territorial row with China by nationalizing the islands, against the explicit advice of the State Department that it would trigger a crisis. It has so far refused to admit even the existence of a dispute. Likewise, Tokyo is taking a much more hardline approach than Washington to China’s Air Defense Identification Zone (ADIZ) in the East China Sea. Last December, Abe refused to comply with Vice President Joe Biden’s plea not to visit the controversial Yasukini Shrine.

U.S. alliance managers have been trying to restrain Japan from taking destabilizing actions, but they are handicapped by their own policy. American negotiators have no bargaining power over the most basic question of the alliance: whether the United States will defend Japan. Threatening nonsupport is not credible so long as American garrisons ensure the unconditionality of its commitments.

Japan’s growing capabilities underline this vulnerability. As Mira Rapp-Hooper wrote last fall in The Diplomat, burdensharing elevates the risk of entrapment because powerful allies demand a greater degree of independence. It reveals what we might call the “burdensharing dilemma”: there is a tradeoff between encouraging collective defense and maintaining control over the direction of the U.S.-Japan alliance.

America has long worried about its allies’ capacity for independent military action. Despite wanting to arm Taiwan and South Korea in the early Cold War, on balance U.S. policymakers were too troubled by what the ambitious Chiang Kai-shek and Syngman Rhee might do with such weaponry. Now, Washington is trying to dissuade Japan from acquiring long-range missile capabilities that would allow it to preemptively strike enemy bases.

But today is not the Cold War; China’s challenge is simply too great to discourage America’s allies from rearmament. So unless Washington is willing to fundamentally revise the way it does extended deterrence, the U.S. will be forced to accept an accelerating risk that Japan will act independently in ways inimical to American interests. Rather than assets on a balance sheet, allies will count more as liabilities, and the extent of U.S. commitments will reflect the extent of its weakness.

Instead of waiting to cede the initiative to others, the United States must replace its permanent bases in Asia with military access agreements or, at most, temporary rotational deployments. This revolution would reintroduce the freedom to threaten nonsupport for behavior that is strategically or morally intolerable. Fear of abandonment should deliver a healthy dose of prudence in Tokyo. Deterrence against China may prove more difficult, and Japan will rearm at an enhanced rate, but the current arrangement promises no balance between deterring Beijing and restraining Tokyo.

Critics may charge that the best way to avoid entrapment is joint training and policy coordination to get America inside Japan’s decision-making loops. It’s overly optimistic, however, to hope that Tokyo will just put its new capabilities at U.S. disposal. Whatever entrée Washington currently has into Japanese policymaking, moreover, seems slight. Threatening to force down Chinese planes or drones over the disputed territory is hardly favorable to American policy. Robert Gates recently divulged that the U.S. prevented an escalatory South Korean airstrike against the north in 2010. How long until America’s alliances are no longer hierarchical enough to demand such restraint, or even be aware of a decision beforehand?

Another argument is that there’s less automaticity in American commitments than might appear. If a conflict erupted over the Senkaku/Diaoyu, Japan has the capabilities to take care of itself. But if that’s the case, then the roles of defensive “shield” and offensive “sword” have already reversed. China and Japan, not China and the U.S., have control over the outbreak of a war. If it escalates beyond the islands even marginally, the U.S. is destined to fight in it nevertheless.
Jake A. Douglas is a research assistant at the College of William & Mary.