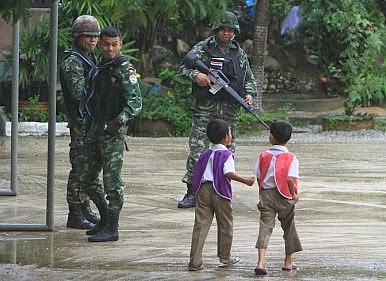 Exactly one year ago, hopes were high as the Thai government under the leadership of Yingluck Shinawatra made a historic move to end a conflict that had already claimed more than 5300 lives since its brutal resurgence in 2004. With the blessings of her deposed and now exiled brother Thaksin, who had previously approached Malaysia’s Prime Minister Najib Razak for cooperation, Shinawatra initiated a formal peace dialogue with the Barisan Rovolusi Nasional (BRN), one of the main insurgent groups that operate in the three violence-ridden provinces of Thailand’s Deep South.

Despite being lauded and supported by many local religious leaders, civil society groups, and scholars working towards a peaceful bottom-up resolution to the conflict, the dialogue soon ran into challenges, lasting only three rounds. A lack of command and commitment by the representatives of both sides, the uncertain and contested role of Malaysia, and the Army’s entrenched interests and stronger role have all contributed to undermine the dialogue.

One possible way out would be to upgrade the dialogue to a negotiation process focusing on the practical aspects of some form of political autonomy for the Southern provinces, which would increase the prospects of ending one of Asia’s oldest conflicts. But this is unlikely given the current political instability in Bangkok and the uncertain future of Prime Minister Yingluck and her government, now bereft of popular support and legitimacy.

Plaguing the peace process at the outset was the lack of leadership unity, legitimacy, and genuine commitment on both sides. It is widely believed among Thai security officials, especially the Army’s top brass, that the senior BRN leaders who joined the talks no longer have command over the young militants operating on the ground and that the dialogue was consequently doomed from the outset. The Army raid on militant camps in July, even while the dialogue was in process, further reflected the military’s snubbing of the BRN-Thai government official agreement to refrain from violence during Ramadan.

Repeated incidents and misunderstandings also indicated that the BRN negotiating team led by Hassan Taib was not willing to continue the peace talks. BRN’s five extreme demands, issued just before the second round, included government recognition of the independence and sovereignty of Patani Malay. This was hardly going to be acceptable to the central government and the Thai establishment. Hassan’s eccentric behavior of pressing several demands on YouTube without prior consultation with his Thai counterpart further complicated the position of the Thai negotiating team leader, National Security Council director Lt. General Paradon Pattanathabut.

Despite the BRN’s threat to pull out after its demands met with no response, constant violence on the ground and heavy criticism from security officials and politicians, the peace dialogue survived only to meet with a call for an indefinite suspension from the Thai side after the anti-government mass protests broke out in Bangkok in late November. According to Paradon, Bangkok wanted to wait until the situation in the capital calmed down. Unfortunately, the street movement evolved into prolonged mass protests and Yingluck’s focus remains on the day-to-day struggle to keep her government in power.

A further complication emerged on the insurgents’ side, now bereft of command. In his last YouTube appearance on December 1, Hassan urged the Thai side to accept the BRN’s five demands as a precondition for continuing the talks, but also indicated he was no longer the chief representative. His disappearance and silence since then have raised speculation and rumors about Malaysia’s role and possible strife inside the militant organization.

The 2013 peace initiative looked promising especially because of Malaysia’s assistance as a facilitator. Thailand’s southern neighbor was known to be the hideout for most key militant commanders, and Bangkok thus expected Kuala Lumpur to have significant leverage over them. Rather than constructive facilitator, however, the external role of Malaysia has been at the center of dissension, further accentuating the lines of division between a complex set of militant outfits.

For example, in early October, one BRN faction led by spiritual leader Sapae-ing Basor, generally seen as having more clout than Taib, claimed that the unexpected peace initiative lacked its approval and expressed its opposition to the external role of Malaysia. This group maintains a deep mistrust of Malaysia, which in 1998 had turned in some of the group’s militants to Thailand. Basor has thus made his participation contingent on guarantees of immunity for him and his followers.

Malaysia’s role is also heavily criticized by Wan Kadir Che Man, the former leader of the now defunct insurgent Bersatu group, who participated in the pre-peace initiative meeting with Thaksin in Malaysia. Wan Kadir claims that the militants’ real leaders, hailing from different groups, were invited to the event but sidelined by the Malaysian authorities, which preventing them from engaging with the former Thai prime minister. Thaksin thus ended up talking to insurgents who do not control operations on the ground and who are thus unable to translate any official agreement into reality. Wan Kadir further accuses both governments of lacking a serious commitment to achieving peace and of being merely interested in fostering their respective public images.

Sources later revealed to a Deep South Watch blogger that despite the disagreement of the Dewan Penilian Party, the BRN’s ruling council, Hassan had been forced to collaborate with Malaysia in order to secure the safe haven for all Patani insurgents living on the other side of the border. Other sources suggested that the rather moderate Hassan might now be under the custody of DPP in an attempt to replace him in future talks with a new hard-core representative. If this holds true, then Bangkok will likely face an even tougher task to look for peace.

The Army Steps Up

Even before the talks were suspended, the Thai government itself had already changed tactics, electing to get the Army involved by consulting it before the fourth meeting and also bringing in General Akanit Muensawas, a veteran negotiator with the insurgents who had earlier been strongly critical of Malaysia’s role.

At first, this can be seen as an effort by the Yingluck government to mend disunity and include more stakeholders. But the balance of forces has changed since then. Following the massive protests and political instability, the Thai prime minister and her party now owe the Thai military for not staging another coup, and there are even signs that the Army has already taken over the peace process. The military may well remain in the driving seat under a new government, particularly because the Army’s top brass tends to be aligned with the opposition.

More importantly, the Army is also known for its conservative and less flexible stance, which will most probably clash with that of the BRN and other militant groups whose ultimate objective is Patani independence. Its presence and role in the conflict area has always been the subject of controversy. Local Malay civil society tends to perceive the Thai armed forces as a troublemaker rather than a solution and has repeatedly asked the government to withdraw the Army and lift its emergency decree in all areas. In Southern eyes, the military’s extra-judicial killings, torture of insurgents, and arrest of innocent civilians have only exacerbated the conflict between the Malay Muslim community and Thai authorities.

Secret dialogues between the Thai government and the Malay Muslim militant groups took place several times in the 1990s and under every government since 2004, often with the Army as a key liaison. The military also claims wide experience in negotiating with insurgents, although its only real success came from the peaceful engagement with the communist insurgents in the 1980-90s. It thus remains doubtful that the increased role of the Army will facilitate any substantial agreement with the militants.

From Dialogue to Negotiating Autonomy

Successive governments have acceded to some of the insurgents’ requests to respect and promote the distinct Malay-Muslim culture in a country where the monarchy often equates national identity with Buddhist religion, followed by 94 percent of the population, and the Thai language.

There have also been significant attempts to improve the socioeconomic conditions of the region, which includes some of Thailand’s least-developed and peripheral provinces. Under the leadership of Police Col. Tawee Sodsong, who directs the government-mandated Southern Border Provinces Administrative Centre, several initiatives have also been implemented to address local concerns such as special rights for Muslim prisoners and the promotion of Malay language and culture programs.

But none of these measures have significantly reduced the levels of violence, let alone eradicated the insurgency, because they do not cover half of what the insurgents aim to achieve or are willing to compromise with.

If Thailand is truly determined to resolve the conflict peacefully, it will have to upgrade the dialogue to a negotiation process. The February 2013 initiative is a good test for Thailand to evaluate how far it can go with concessions, while genuine help from Malaysia can continue to pressure other insurgents to accept an autonomous administration under the Thai Constitution, as it achieved with the BRN. In parallel to these inducements, an efficient counterinsurgency strategy is also much needed to coerce remaining insurgents into giving up their violent methods and joining the peace dialogue. To date, Bangkok has been unable to pursue this dual strategy effectively.

The risk-averse Army and the old political establishment still fear that increased administrative autonomy could give rise to Patani independence. They are consequently inclined to maintain the current status quo based on a fragile and violent stalemate. In fact, their conservatism even rules out acceding to local demands to permit the use of both Thai and Malayu as official languages in the southern provinces.

During his recent visit to Pattani last month, the Thai Army Chief, General Prayuth Chan-ocha confirmed that the peace talks will continue. He also insisted that by generating more development projects for the Deep South, the government was taking the correct approach. This belief is, however, widely questioned. And on the operational front, the counterinsurgency has made little progress.

Only a government with strong public support will be able to take the necessary bold decisions, risks and initiatives, while possessing the required leadership authority and control to end the conflict. Thailand’s current political situation suggests no such government will emerge any time soon. And with the country on the brink of a monarchical succession and ridden by political polarization, any major initiative and focus on peace will have to wait. Until then, conflict will continue to torment the Deep South and more lives will be lost.

Sasiwan Chingchit is an independent research consultant based in Washington D.C. and a visiting international research fellow at the Institute for Defence Studies and Analyses in New Delhi, India. She previously worked as a lecturer and researcher at the Prince of Sonkhla University in Pattani.