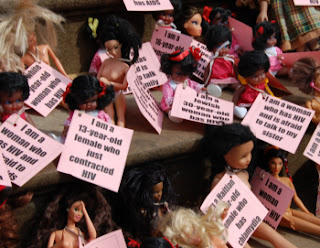 With more and more women falling prey to the disease, the HIV epidemic increasingly has a female face and it is young girls in the age group of 12-20 years who most need better prevention and protection, Mitchell Warren, Executive Director of AVAC: Global Advocacy for HIV Prevention, told CNS in an interview. There are now 35,000 women living with HIV in Cambodia, 81,000 in Myanmar, 88,000 in Indonesia and 210,000 in Thailand, according to World Health Organization statistics.

Women are particularly vulnerable to HIV, which is transmitted by sexual intercourse and infected blood. Sexual assault and other forms of violence against women are also important factors, according to a previous study on African infected women. Biology can also make women more susceptible to infection. But the factors that leave women most at risk are economic, social and political. Most women find themselves totally dependent on their male partners, limiting their negotiating power in terms of safer sex.

Male-dominated governments also often fail to consider the rights and needs of women and girls in their HIV policies and planning, despite increasing numbers of women living with HIV in Asean. Women and girls often face stigma and discrimination in health care settings and are subject to human rights violations like forced sterilization, forced abortion and compulsory HIV testing.

Earlier this week, young women, female sex workers, transgender women, women who use drugs and women living with HIV met in Luang Prabang, Laos, to call on the Association of Southeast Asian Nations to support women and girls living with and affected by HIV.

Civil society and community groups representing key affected women and girls called for scaling up action and resources for policies and programs that address the rights of women and girls in the context of HIV and AIDS.

Women and girls from civil society including communities representing the voices from young women, female sex workers, transgender women, women who use drugs and women living with HIV came together under the umbrella of under the name Unzip the Lips. Their message at the Laotian conclave was clear. They are a platform of individuals and organizations working for the rights and meaningful participation of key affected women and girls in the context of HIV and its intersections with other gender issues in the Asia Pacific region.

As a united movement, the delegates were able to play a leading role in the development of recommendations arising from the meeting, in which delegates committed themselves to repealing punitive laws and ensuring that existing laws, regulations and policies of Asean member states address the rights of key affected women and girls affected by HIV and AIDS.

The problems are manifold for women. Across Asia, what has been called a culture of silence surrounds sex, dictating that "good" women be ignorant about sex and passive in sexual interactions, meaning women usually remain uninformed about risk reduction and unable or unwilling to demand that their partners practice safe sex.

“And finally, the most disturbing form of male power, violence against women, contributes both directly and indirectly to women's vulnerability to HIV,” Rao Gupta wrote. “In population-based studies conducted worldwide, anywhere from 10 to over 50 percent of women report physical assault by an intimate partner. And one-third to one-half of physically abused women also report sexual coercion.”

“We are asking you to repeal laws that the affect sex workers, men who have sex, trans people, people who use drugs and people living with HIV,” Khartini, a sex worker and transgender woman who attended the Laos conclave told Asean delegates, “Don’t talk about getting to zero new HIV infections if you are not going to remove punitive laws and policies that restrict our human rights.”

The delegates restated their commitment to the Asean Declaration of Commitment: Getting to Zero new HIV infections, zero discrimination, zero aids-related death. Community representatives applauded these commitments but stressed the need for Asean Member States to take action to fulfill their commitments.

“Asean member states have pledged to eliminate gender inequalities and gender based abuse and violence and increase the capacity of women and girls to protect themselves from HIV,” said Baby Rivona, an activist living with HIV. “We want to live in a world where these commitments are realized, where programs and funds, and resource are reaching us, key affected women and girls, ensuring that we can live in dignity and enjoy our human rights.” Asia Sentinel