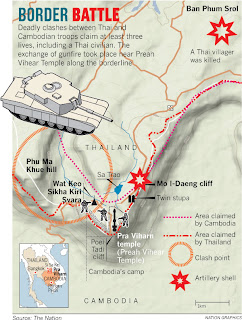 Cambodia and Thailand have always had a closely linked history. Despite sharing many common cultural traditions and traits, the Thai-Khmer relationship has often been strained.

Both countries have a long history of advanced civilisation. One of the earliest human settlements in Southeast Asia was located in what today is Cambodia, and the ancient Khmer Kingdom of Angkor was also centred there.

Prior to Cambodia becoming a French colony in 1863, parts of western Cambodia had been part of Siam. Battambang, for example, for 112 years was the major city of eastern Siam, and a major trading centre in the heart of a major rice growing area.

There are numerous factors contributing to the strained relations between the countries. It is important for Thais to know that the Cambodians feel that the Siamese historically took much territory from their country (the sacking of Angkor Wat in the 15th century, for example).

The Thais should also know that the Cambodians strongly feel the Thais have borrowed much from Cambodian culture and civilisation but without adequate acknowledgement. The Cambodians claim that the Thai alphabet, Thai royal language and court customs, and classical dancing and architecture have their roots in Cambodia.

Interestingly Thais in their history books learn just the opposite - that the Cambodians adopted Thai arts, dance, and architecture.

The Thais also have numerous misunderstandings of Cambodians being influenced by the media, films, and drama.

First, many Thais think that Khom and Khmer are different peoples - with the Khom being the people who built the great Angkor empire and magnificent architecture and who are now extinct. They see the Khmer as a different people who now control Cambodia and who committed the atrocities of the Khmer Rouge. In fact, the Khom and Khmer are the same people. Also, in general, Cambodians prefer to be called Khmer, instead of the term "Khamen" used by the Thai to refer to them.

Second, many Thai see Cambodia as an extremely poor country with illiterate people similar to a Sub-Saharan African country. They do not realize that there are, in fact, many multilingual and literate Cambodians and that Cambodia has one of the fastest growing economies in the world (7.7 per cent annual economic growth over the past decade).

Third, Thai film and drama often show the Khmer in the stereotypical role of practising black magic. Some Thais may be warned not to visit Cambodia for fear they might be hexed by Cambodian black magic.

Despite such misunderstandings, the two countries are major trading partners, with Cambodia needing many processed goods (such as clothing, cosmetics, and household items) from Thailand, and it in turn buying many natural resources and raw materials (such as fish, agricultural products, and gems) from Cambodia.

In addition, the Thai government has carried on a continuing programme of economic and educational assistance to Cambodia. HRH Princess Maha Chakri Sirindhorn, for instance, has built and sponsored Kampong Chheu Teal High School in Cambodia's Kampong Thom Province, which has grown from a small rural school to become one of the model high schools in the country.

Despite such assistance, a major anti-Thai riot occurred in Phnom Penh in January 2003, because of a rumour that a popular Thai actress Suwanan Kunying, known in Cambodia as Phkay Pruk ("Morning Star"), claiming Angkor Wat belonged to Thailand.

In 2008, new tensions arose related to the ancient temple, Preah Vihear, on the Thai-Cambodian border. This temple itself belongs to Cambodia as the result of a 1962 International Court of Justice decision.

Fortunately there are many materials available to help Thais better understand Cambodia. In terms of appreciating the rich Khmer Angkor civilisation, the Chinese diplomat, Zhao Daguan, left behind detailed reflections of his experiences there in the late 13th century. The Siam Society published a richly illustrated translation of his major work, The Customs of Cambodia. David Chandler's A History of Cambodia (2007) is also an excellent read for those wanting to learn more about Cambodian history from a balanced impartial perspective.

There are also many riveting books told by survivors of the Khmer Rouge such as Chanrithy Him's When Broken Glass Floats: Growing up under the Khmer Rouge (2000). Some modern Cambodian feature films of interest are "The Rice People" (1994), "One Night after the War" (1997), "Enemies of the People" (2010), and "Lost Loves" (2012).

In studying this material, Thai students are not only learning more about their Cambodian neighbours but also using English, the major language for communication in the AEC era.

With respect to science and environmental studies, Thai students should become more familiar with the major central lake, Tonle Sap, which is the largest freshwater lake in Southeast Asia and a huge source of fish and protein for Cambodians. The size of this lake changes dramatically each year as a result of the water flowing from the Mekong River. The Tonle Sap River feeding into the lake amazingly reverses direction each year.

Given how much Thailand and Cambodia share historically, culturally, and linguistically and the greatness of their ancient civilisations, there is certainly potential for them to be amicable partners in the AEC era with mutual benefits for all.