China finds another route to the Indian Ocean 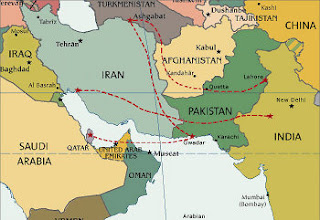 The Singapore Port Authority’s decision to pull out of a 40-year contract to operate the new Gwadar deep sea port in southwestern Pakistan, now to be taken over by the Chinese, is causing consternation in India and the United States.

Located at the entrance of the Persian Gulf and about 460 km from Karachi, Gwadar has considerable geo-strategic significance. The growing rivalry between China and India, the continued unstable regional environment in the Persian Gulf following the Iran-Iraq and Gulf Wars and the emergence of the new Central Asian states have added further added to its importance.

The development of the port, in southeastern Balochistan, had already attracted considerable attention from the west because it was constructed with Chinese aid. Although not commenting publicly, US and Indian officials in particular regard it as a strategic expansion into the Indian Ocean and claim that China is intent on using the port as a naval base in its “string of pearls strategy.”

Gwadar, said a Hong Kong-based security analyst, “has long been stitched into China’s strategy of building or upgrading ports between Burma and West Asia, incorporating Sri Lanka and more recently the Seychelles. The reality is that Pakistan has been reliant on a single port, Karachi, since independence and Gwadar, close to the Iran border, offers quicker access to the booming Gulf countries as well as putting greater distance between its naval assets and India.”

SPA International, which operates 20 port projects across 11 countries, was awarded operational control of the Gwadar facility by former Pakistani President Pervez Musharraf in 2007. Islamabad was rumored at the time to have been pressured into allowing SPA to take over the port by the Pentagon so as not to upset Indian sentiments and simultaneously prevent Beijing from gaining heft in the region and influence over Islamabad.

However, friction soon developed between SPA and Islamabad due to the Pakistani government’s inability to free the port's 236 hectares from the control of its navy. In addition, the Pakistani high court in October 2010 forbade its government from allotting the contract to a foreign company. The final straw was provided by the volatile security situation in Balochistan, which hindered SPA from investing the money it had promised for the development of the port and off-shore infrastructure.

The US-led war on terror, insiders say, also constituted a major hurdle for the development of the seaport. The Americans used the port to promote their own interests at the cost of Pakistan’s commercial ambitions in the region. Since the war on terror was being fought on Pakistan's north-west frontiers with Afghanistan, located some miles away from the newly built port, the Pentagon was keen that it be retained as a military base support only. Apparently officials with the UAE, which operates ports in the region, also hindered Gwadar’s development to maintain Dubai’s hegemony.

The Gwadar port has already received a cash infusion of US$ 220 million from China. The port’s new operator will further invest another US$10 billion on the project. The Chinese-built first phase of includes three multipurpose berths of 602-meter quay length, one 100 meter-long service berth, and 4.35 kilometers of deep-water channel, alongside roads, operational craft and equipment and shore-based port buildings and facilities.

Analysts say China has plans to use the port as a linchpin for its global oil trade and may resuscitate a US$12-billion oil and refinery project around the port which fell through in 2009. Pakistan, say sources, has long been pushing for China's takeover of the port to make it an oil pipeline hub for the region.

Strategically located between three important regions of the world: the oil-rich Middle East, the populous South Asia and resource-rich Central Asia, the port guards several important sea-lanes from Europe, Africa, East Asia, and the Pacific region through the Red Sea, the Strait of Hormuz and the Persian Gulf.

For Pakistan though, the port is endowed with enormous security and economic significance. It also marks the realization of Islamabad’s dream to own a world-class duty-free port and free economic zone a la Dubai.
Chinese scholar Li Yan writes in Contemporary International Relations that due to the area’s geopolitical importance, China’s aid has raised concern in many countries especially the US and India. “The construction of the port is seen by some as Chinese strategic expansion in the Indian Ocean in the form of a naval staging base. Over the years, the Gwadar port issue has also become a point of conflict in Sino-US relations,” writes Yan.

The reasons aren’t far to seek. Currently, China relies on oil from the Gulf which passes via a circuitous route through the Strait of Malacca and is then transported thousands of miles by land to the country’s western regions. However, Gwadar offers China a safer, cheaper and shorter route to the Middle-East which can augment both its profitability and trade prospects. China’s decision to finance the construction of the port and coastal highway linking to Karachi will also help its design to develop western China.

“China taking over Gwadar will primarily lead to two things,” said Dr Jaipraksh Sukumar of a Delhi-based think tank. “It will help enhance Pakistan’s economic heft in the region. Secondly, it will enable China to augment its influence over the oil supply route in the Indian Ocean.”

This is precisely where New Delhi’s worries stem from. India fears that the new port and the associated developments will help it become a naval outpost for China and hamper its own security and primacy in the region. Besides, China’s involvement in the project will lead to closer relations between Beijing and Islamabad.

In any case, sources in India’s Ministry of External Affairs point out the obvious deterioration in US and Pakistan relations.

“Due to altered national priorities, Washington is seeking new strategic partners in Asia and India,” a senior deputy secretary told Asia Sentinel. “Here, New Delhi more than Islamabad fits in with its set of priorities to cultivate like-minded friends who also carry heft in the region. Meanwhile, the futility of doing Washington’s bidding with its eyes closed is also not lost on Pakistan.”

However Pakistan warming up to China might not be such a bad thing, according to the think tank’s Sukumar, who says closer Pak-Sino ties may in fact “create greater geo-political and geo-strategic equilibrium in the region in the days to come”.

Be that as it may, Gwadar’s overriding economic significance can’t be blunted by the region’s complex geopolitics. Experts reckon the port’s development will generate billions of dollars in revenues apart from creating at least two million jobs. The Economic Cooperation Organization highway designed to link the Islamabad-Tehran-Istanbul trade corridor, the 653-km Makram Coastal Highway and other mega projects in road sectors will connect the Gwadar free port with Central Asian States, Gulf States and China.

And as well the rest of Pakistan itself. Gwadar is thus just one component of the Greater Gwadar Plan. In addition to the port, a complex network of roads is designed to connect Gwadar with Karachi, Pasni, Ormara and Turbat.

By Neeta Lal is a New Delhi-based senior journalist;Asia Sentinel