Bombs and bombast in Indonesia 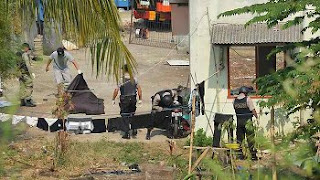 Inept bombers may not be so inept next time

It was a sobering week on the terrorist front. An accidental blast at an “orphanage” in the Jakarta suburb of Depok in last Saturday had a bit of a slapstick feel to it initially: inept terrorists do everybody a favor and blow themselves up before they do any real harm.

The Depok case, however, proved to be a lot more interesting than first thought. Authorities quickly said the house was being used as a staging area for serious attacks. Coordinating Minister for Political and Security Affairs Djoko Suyanto said the location was “used to store [explosive] materials and for assembly.”

Then some misguided soul named Muhammad Toriq walked into a West Jakarta police station wearing what was described by police as a “suicide bomb belt” and gave himself up. He had been planning to blow up police targets or perhaps a Buddhist center to avenge the treatment of Rohingya Muslims in Myanmar.

He had been part of the terror crowd in Depok and fled the scene after his compatriots blew the place up, police said. “We thank him for surrendering,” National Police spokesman Brig. Gen. Boy Rafli Amar, said on Monday in a statement that sounded a bit friendly to my foreign ears (on second thought, I guess its OK to thank Toriq for not pulling the trigger on that vest).

Then there was the sad spectacle of those 100 or so protesters outside the US Embassy on Tuesday, the 11th anniversary of the 9/11 attacks on the World Trade Center and the Pentagon.

This group carried signs saying “We are all Osama” under a picture of the late Osama bin Laden. They paraded around spouting utter idiocy like “Democracy brings oppression” and saying that the 9/11 murderers died defending fellow Muslims in Palestine from US oppression.

In recent years, we have grown used to thinking that Indonesia is on an inevitable rise to greatness. If we build enough shopping malls, schools, airports and the rest, the country will be unstoppable. Indeed, a lot of the good news is certainly true. But we also know how much damage one attack — like Bali in 2002 or the twin hotel blasts in 2009 — can do to the nation’s image.

Depok and that demonstration — some of whose participants identified themselves with Jemaah Anshorut Tauhid, which has been labeled a terrorist group — are sobering reminders that the lunatics are still among us. Indeed, where is the dividing line between people who put on the suicide vest and those like the Islamic Defenders Front and others who spout vicious religious rhetoric, attack minorities and take violent actions to impose their views with impunity?

It can be almost impossible in the current climate to know where rhetoric stops and terrorist action begins. There have been increasing numbers of attacks on police in the last year and warnings from security officials that hard-line groups — which no longer have any central command — may seek high-profile corruptors as targets in a bid for public sympathy.

The police have done an admirable job of rolling up the leaders of the Jemaah Islamiyah terror network in recent years. But those who spread radical ideas, call for Jihad, seek to undermine the tolerant traditions of the nation and lure the unbalanced to seek glory by killing the innocent are still out there.

Indonesia is headed in the right direction economically. But the country needs more leaders who are committed to countering the lunatics at the idea stage, who will stand up and proclaim unwavering support for the rule of law in the face of intolerance because unknown numbers of people get stirred up by the hateful rhetoric still being openly promulgated.

“They are out there,” said a security expert I spoke to about the state of the terrorist threat. “And it is harder and harder to predict what they will do. It’s all incredibly messy.”

(A Lin Neumann is one of the founders of Asia Sentinel. He wrote this for the Jakarta Globe.)