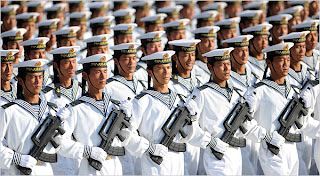 Speaking to reporters before arriving in Tokyo on a trip to Asia, Mr Panetta appealed for restraint amid mounting tensions over territorial rights in the East China Sea and the South China Sea.

"I am concerned that when these countries engage in provocations of one kind or another over these various islands, that it raises the possibility that a misjudgment on one side or the other could result in violence, and could result in conflict," Mr Panetta said, when asked about a clash between Japan and China.

"And that conflict would then have the potential of expanding."

The Pentagon chief's trip coincides with an escalating row between Asia's two largest economies over an archipelago in the East China Sea administered by Tokyo under the name Senkaku and claimed by China under the name Diaoyu.

Tensions have steadily mounted since pro-Beijing activists were arrested and deported after landing on one of the islands in August. Japanese nationalists then followed, raising their flag on the same island days later.

On Tuesday, Japan announced it had nationalised three of the islands in the chain, triggering protests in China. Tokyo already owns another and leases the fifth.

The uninhabited islands are in important sea lanes and the seabed nearby is thought to harbour valuable mineral resources.

Sometimes violent demonstrations have been held in China near diplomatic missions in the days since Tokyo's announcement, although there have been no reports of deaths or serious injuries.
Mr Panetta said he and US Secretary of State Hillary Clinton "both strongly urge that these countries - rather than engaging in that provocative behaviour - engage in an effort to find ways to peacefully resolve these kind of issues."

Mr Panetta, who is due to hold talks today with his Japanese counterpart before heading to China, predicted economic rivalry would lead to more feuds in the future over potentially resource-rich areas in the Asia-Pacific region.

"We're going to face more of this. Countries are searching for resources," he said, adding: "There's got to be a peaceful way to resolve these issues."

"What we don't want is to have any kind of provocative behaviour on the part of China or anybody else result in conflict."

Territorial disputes in the South China Sea also have Washington worried, as China has refused to withdraw claims to virtually all of the strategic waterway and has been accused of bullying smaller states in the area.

The Philippines and Vietnam have alleged Beijing has used intimidation to push its claims in the South China Sea, through which around half of the world's cargo passes.

The United States has backed an effort by the 10-member Association of Southeast Asian Nations (ASEAN) to seek a code to govern access to the sea, which would establish rules and a formal dialogue to prevent incidents from escalating into full-blown conflict.

Mr Panetta's trip is part of a bid by President Barack Obama to shift Washington's diplomatic and military focus to Asia, amid concern over China's growing power and assertive stance.

But sceptics question if the Pentagon has the resources to exert sufficient influence in Asia, especially when it must contend with repeated crises in the Middle East. Herald Sun