China's Changing of the Guard 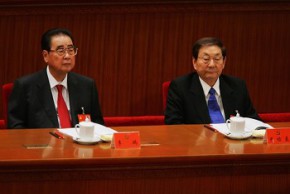 In October, when the Communist Party Central Committee meets in Beidaihe to deliver generational change in its leadership, the spotlight will turn to Vice Premier Li Keqing, the heir apparent for the premiership and whether he can follow through on his predecessor Wen Jiabao’s financial, economic, and most important, political reform.

Theoretically Wen leaves a mess behind him, including outrageous steel-making over capacity, excessive fiscal reliance on real estate development and the resulting housing problems, which may or may not be a bubble, depending on who is dong the telling. Despite China’s 25 years of steadily growing prosperity, which has lifted hundreds of millions out of poverty, there are significant imbalances in the system that will take a herculean effort to correct.

China’s local governments went on a massive development binge starting in 2008 that has put them 10.78 trillion yuan (US$1.69 trillion) in debt, equivalent to 27 percent of the country’s entire GDP, according to a study of Chinese local government debt by the Seoul-based Samsung Economic Research Institute.

It faces a sea of demographic problems engendered by the one-child policy, which has led to hundreds of millions of increasingly elderly with only one child to support each family. State-owned enterprises, the behemoths that had to be bailed out in the 1990s, have been quietly reasserting their control over the economy. A long range of environmental disasters includes problems with the Three Gorges Dam and poisoned rivers from unregulated rare earths mining.

As with all party apparatchiks, Li Keqing has training for the job for most of his life, advancing steadily up through the hierarchy. Although he appears to have lost out to Xi Jinping to take over from Hu Jintao in an internal power struggle, he has taken on some of the government’s most important portfolios. An economist unlike many of China’s leadership, who have tended to be engineers or to come from other hands-on professions, he has been conspicuously visible in green development and green energy, cutting China’s growing income gap, modernizing key industries and focusing on raising domestic demand.

So how will history judge Wen Jiabao, and will Li follow in his footsteps? In terms of management style, Wen often suffers in comparison with his predecessor, Zhu Rongji, in governing China over the past two decades. Zhu, once called the iron prime minister, is usually considered to rank considerably ahead of Wen in terms of relative career achievements.

Indeed, Zhu is credited with successfully steering China out of the aftermath of the Asian Financial Crisis and clear of the bursting of the US tech bubble. Under Zhu’s stewardship, China soft-landed, with the economy maintaining 7-8 percent annual gross domestic product growth between 1998 and 2003. Zhu personally led a famous task force to Xiamen in 2000 to crack down on a vast smuggling ring and put it out of business. The ring’s leader, Lai Changxing, decamped to Canada to spend years fighting extradition before the Chinese authorities finally got him back.

Wen has never won those kinds of stripes. But that is not to forget that Zhu charged then-Vice Premier Wen with handling delicate financial and agriculture policymaking during those very difficult economic times. And Wen rose to the task. Having entered the premiership in 1998 after China had enjoyed years of extremely rapid double-digit growth but essentially also unrestrained double-digit domestic inflation, Zhu Rongji knew and had to make sure that China would have to take on serious economic reforms ahead of entering the World Trade Organization in 2001.

The influx of foreign capital, along with China’s promise to open previously safeguarded sectors for outsider competition, catapulted China to the next level. Zhu’s straight-talking and corruption-fighting management style was what China needed that to hit the WTO deadline. Unquestionably, Wen and his more toned-down consensus-seeking approach was a drastic departure from that of his predecessor, but Wen had the magic touch among people both inside and outside of China, winning him the title last only earned by PRC’s founding Premier, Zhou Enlai – the “People’s Premier.”

Almost certainly some of Wen’s populist policies can be expected to deliver imperial headaches for the incoming premier to deal with. Nevertheless, reflecting on Wen’s two terms, China under his economic leadership delivered enviable growth rates - six years of 10%-plus GDP, and relatively tamed inflation, with the annual consumer price index exceeding 5% for only two of 10 years. Some commentators have argued that China’s financial sector reforms have slowed, but surely there were few complaints when the Shanghai Stock Exchange Index was going from new high to new high during 2006 and 2007.

In addition, with the global financial markets crippled so dramatically by “financial innovations” from the “financial engineers” in 2008, the pragmatic and on-the-ground approach on financial sector reform taken by Wen, a trained geologist, was perhaps the better bet. While Wen and Zhu took on the premiership with widely differing styles, both appear to have been appropriate for their eras.

Now it is Li’s turn. Despite the criticisms of Wen, Li will have a tougher act to follow than most critics think. Asia Sentinel (Steve Wang is an economist and Research Director for REORIENT Securities of Hong Kong)