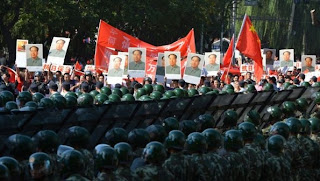 Of useful idiots and true believers

YEAR in, year out, the anniversary of the Mukden incident always arrives on September 18th.

Anniversaries are like that, and yet the memory of September 18th, 1931 is subject to change within China, flaring up and settling down in an unpredictable pattern. It is the true story of a false bombing, plotted by the Japanese against a Japanese-owned railway near the north-eastern city of Shenyang as a pretext for the invasion of much of China. In Western press accounts it is barely remembered at all, and so tends to be potted and repotted with a numbing regularity. This year, with anti-Japan sentiment already at a high for what seem like unrelated reasons, the timing looks almost malevolent. Can such things be planned?

Anyone with much of a memory who has been watching the past few days of raucous anti-Japan demonstrations in Beijing and other Chinese cities might be feeling more than a touch of déjà vu. During China’s last big outbreak of anti-Japan protests, in 2005, and during the violent anti-American and anti-NATO protests that broke out after the deadly bombing in 1999 of China’s embassy in Belgrade, the scene was not dissimilar. Angry crowds of Chinese demonstrators marching and shouting as row after row of riot police watched passively—protecting embassies and consulates from hostile breach, and sometimes bearing the brunt when bottles, fruit or slashes of paint were sent flying.

Then as now, the protesters’ slogans, whether chanted or waved on signs and banners, ranged from assertions of simple patriotism and the “bullying” and “shame” China has endured over the course of its modern history, to harsh and racist messages urging violence.
The protesters are not the only ones repeating themselves. There is a whiff of déjà vu too when one turns to the reaction of onlookers. Especially with regard to the question of whether the demonstrations are genuine, passionate outpourings by ordinary Chinese citizens, or stage-managed pieces of political theatre put on by puppet-masters from Party central.

One long-time foreign resident on the scene of this weekend’s demonstrations in Beijing was convinced “the whole thing was a fake” and that “every single person with their fist in the air” was a member of the Chinese army or police forces “assigned to compulsory duty to fake the protest.”
Some Chinese are similarly sceptical “about the real situation of the ‘patriotic’ anti-Japan demonstrations.” They offered up as proof the identification one man, who was photographed leading protesters in Xi’an with megaphone in his hand and anti-Japanese slogans on his shirt, as a senior local police official.

Your correspondent has learned that to ask demonstrators in these situations whether they have been put up to being there, or even helped along, is a risky thing to do. (The lesson comes from personal experience, though common sense might have sufficed.) It invites anger and indignation for suggesting that they have been manipulated—or insincere.

Given that the answer to this question of whether such demonstrations are stage-managed or spontaneous actually does matter a great deal, is it not worth noting that the two possibilities are not mutually exclusive? And that in some measure both are likely true?

Despite the presence of some officials in the mix, and what may be their significant role in guiding the proceedings, there should be no doubting that there are also plenty of ordinary people joining in, expressing real passion and anger.

Fierce anti-Japanese attitudes are widespread in China, across lines of region, class and age group. For anyone with even the slightest passing knowledge of 20th-century history, it is not hard to understand the roots of these feelings. Still it is disconcerting to see them cultivated and encouraged across all the platforms of China’s state-controlled media.

That they have been cultivated is beyond dispute. There may be surprising diversity of opinion in the new and quite wild world of the Chinese blogosphere, but the mainstream channels of discourse are still managed directly by the Party. And there—in the news, academic publishing, educational materials, television dramas and more—the anti-Japan drumbeat can ever be heard. Sometimes faster or louder, sometimes slower or softer, but never absent when the subject ranges towards Japan. The Chinese government takes very seriously the business of using media to “guide public opinion”.

To cite the role of those efforts in shaping views that are commonly held in China is not to deny that the views are themselves sincere. People are genuinely passionate about the disputed islands, as they are about the rest of the sorry modern history of Sino-Japanese relations. And Japan has done its share to keep the story in the news in recent weeks. China’s state-run media have chosen to emphasise it.

So now there are people who really do want to march, chant and throw plastic bottles at Japan’s embassy. And the authorities—either because they are afraid of angering people by denying them the opportunity or because they like the idea—are allowing it, up to a point. Since it would be riskier to let protesters march long distances across Beijing and pick up steam as they went, it makes a good deal of sense to provide the masses with buses. And since they are loth to pass up any opportunity to guide public opinion, they are probably also handing out flags and signs with approved messages.

In short, officials are allowing the demonstrators to do their thing, and at the same time doing their best to channel them. To credit the object of their manipulations as the real passion of real people is not to deny that there is some manipulating going on. Likewise to acknowledge that protesters may have been bused in, handed a sign to wave and a bottle of water (either to drink or to hurl over an embassy wall) is not to say that their passions are fake.