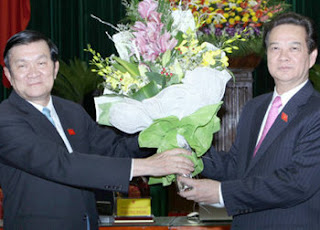 Sang and Dung in happier times

• The economic deterioration of Vietnam provides the perfect setting for regime change, with a scandal-ridden prime minister seeking to hold onto his position

he economic nightmare that has befallen Vietnam has resulted in much finger-pointing, with President Truong Tan Sang and his supporters putting Prime Minister Nguyen Tan Dung in the crosshairs.

Over the past decade, Vietnam benefited greatly from economic reforms and a wealth of foreign investment. During the heyday, it was all too easy for the country’s leadership and the Communist Party to hide the waste and corruption behind skyrocketing economic growth.

Today, however, all of that is over. The waste, corruption, and poor management that have been the norm are now the target of government crackdowns, if only to maintain legitimacy in the eyes of the people. A power struggle between the prime minister and president, state enterprises deep in the red over senseless business endeavors and the arrests of banking officials have all signaled to the Vietnamese people that these are uncertain times.

The path for two leaders
If Prime Minister Dung can survive a challenge to his leadership, one could expect the prime minister to consolidate and strengthen his position within the party by marginalizing President Sang and weeding out his supporters. Rather than taking this challenge as an impetus to change, the prime minister will likely use it as an excuse to double down and stay the path. Now more than ever, Vietnam cannot risk instability, which President Sang would be accused of bringing about. For better or worse, Prime Minister Dung’s vision will serve as the vision for Vietnam.

On the other hand, should there be a settlement between the two leaders, one could expect more power sharing and more input in government from President Sang and his supporters, all under the guise of increased accountability. Prime Minister Dung’s position within the government and party would be severely weakened, as the president would undoubtedly demand concessions, lest the prime minister face a political coup d’état. The Communist Party, in attempt to maintain control over the country, would sooner throw the prime minister under the bus than endure the black eye that would result from a public intraparty war.

An institutional problem
Regardless of the outcome, what is certain is that this so-called struggle for accountability will do little to aid the Vietnamese people, whose fortunes are unlikely to change. The power struggle is simply that--a power struggle, not one born out of a desperate need to reform Vietnam. This struggle is not one that will benefit the masses but the family and friends of those individuals in power. This is ultimately a struggle of the ruling class, not the proletariat; and when the dust finally settles, it will be business as usual.

It is not the individuals that need changing but the institution itself. Although the Communist Party today remains communist in name only, the organization is notorious for its lack of transparency, which has led Vietnam down this path of financial disaster. Corruption and poor management remain hidden from view until it is too late, at which point the wealthy few can hide while the working majority are left holding the bag labeled “debt.” A patronage system allows family and friends to reap the benefits of having people in high places, rather than having the best person for the job.

A second look
For almost four decades, the Communist Party of Vietnam has provided stability, whether in poverty or prosperity. During the early days when ideology governed the country’s affairs, the people were poor and hungry. However, because they were poor and hungry, they were too distracted to challenge the party. When the country boomed, the people experienced an awakening of sorts--with a little bit of luck and a little bit of hard work, they could be rich, or at least better off than they were yesterday.

The party assumed credit for this success and impressed upon the people its work in helping the nation. The party was good for Vietnam. Whatever else the party had done or was involved in on the side, properly or improperly, the party had led the country out from poverty to prosperity. No one would complain as long as the country continued to prosper. But now, as the economy slows and foreign investment dwindles, the people are fed just enough, rich just enough, to look at their leaders with a critical eye.

Although the economic downturn and power struggle have provided an opening for the people to demand real change in government, the party remains too intertwined in Vietnamese society for it to simply roll over and die. In all likelihood, change will first come from within the party rather than from without, but whether said change will benefit the people remains questionable.

With more than 60 percent of the Vietnamese population born after the Vietnam War, these are people born into families whose greatest difficulties at time were putting food on the table. Now, these same people, many of whom have families of their own, face an entirely different set of challenges--climbing the social ladder, a climb that cannot be achieved in a struggling economy. They have seen the light at the end of the tunnel but are now seeing that light fade away due to the government’s mismanagement.

Much like weeds, cutting the head will achieve nothing; one must remove the roots. Maybe it is time for the Communist Party to step aside.

(Khanh Vu Duc is a Vietnamese Canadian lawyer in Ottawa who researches on international relations and international law. He is a frequent contributor to Asia Sentinel.)