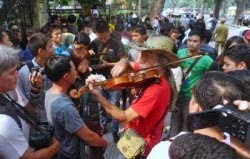 Vietnam’s political culture is gradually transforming from totalitarianism to pluralism.

Because an emerging and independent civil society is openly challenging communist party rule.

The most high-profile example is a petition signed by Group 72, a movement of nationally well-known personalities, intellectuals, party members and retired high-ranking officials of the communist government. In early 2013, Group 72 submitted its own draft Western-style constitution to the Vietnamese legislature, requested a multi-party and inclusive election, and called for Vietnam to transform from a one-party state into a democracy. After Group 72’s motion, other petitions and movements prompted the authorities to increase control and repression.

Other recent movements included, for example, the Declaration of Free Citizens; Declaration 258, by a group of bloggers; and more recently an open letter written and circulated on the internet by a veteran communist party member calling for the founding of a new political party to compete with the Communist Party of Vietnam (CPV).

There is now a clear choice of media in Vietnam, between the CPV’s theorists and opinion writers, whose articles are published in the state-controlled media, and members of civil society, who write on social media networks.

And civil society members are having some success. In May 2013, a group of 20 organisations managed to convince the Vietnamese parliament — which operates under the direction of the CPV — to postpone the passage of a draft revised land law by presenting independent recommendations based on community consultations.

Many dissenting members of civil society are CPV members and once held senior offices in the government. These people are speaking out because they are frustrated with Vietnam’s decline. It is nearly 70 years since the CPV took power in the north of Vietnam and approximately 38 years since it took over the rest of the country, never in that time has its rule and legitimacy been challenged as now.

The reason, simply put, is that the party is failing its people.

First, even though the Vietnamese Constitution prescribes a referendum, a referendum has never been held. Instead, the party controls the Constitution. Group 72 and other civil society organisations recently waged a lengthy, high-profile and costly campaign to collect public comments on the draft revised constitution. The CPV ignored them.

Second, corruption is rampant, but it is not addressed effectively for various reasons, including a subservient judiciary. The government is built on patron–client relationships.

Third, the authorities arbitrarily evict people from their land for construction projects even though farmers account for nearly 80 per cent of the population and are loyal believers in the CPV. This problem results from vague and inappropriate legal provisions. Land is owned by the people, but managed by the state.

In addition, human rights and freedoms are violated, including the right of demonstrators to protest China’s aggressive moves in the South China Sea.

Fifth, the economy is at risk of sliding into deep stagnation.

All of these problems are institutional, as civil society activists point out. The productivity of the labour force is repressed because human creativity and freedom cannot flourish. Only when the party-state transforms to a pluralist democracy will the country escape its social and economic crises.

Comparative studies of regime change from communism to democracy in Central and Eastern European countries show that civil society can be a driving force for change. Civil society in Central Europe underwent four stages of development: defensive, emergent, mobilisational and institutional. In the first two stages (defensive and emergent), individuals, independent groups and movements asserted their autonomy and pursued limited goals in a public space that widened as the reforming party-state gave certain concessions. In the third stage (mobilisation), groups and individuals sought to undermine the legitimacy of the party-state and offer alternative forms of governance. The fourth stage (institutional) sees a cooperative relationship between the state and society, in which laws are enacted to ensure free elections. Recent developments in Vietnam suggest that civil society activists are following the same pattern.

The establishment of a ‘Civil Society Forum’ in Vietnam on 23 September shows that Vietnamese civil society is beginning to ‘mobilise’ — it is in the third stage of development. This forum is the product of a manifesto called the ‘Declaration on the Implementation of Civil and Political Rights’, which was prepared by a group of 130 Vietnamese citizens. The forum is set to be ‘a venue where organizations, groups, individuals can express their views … exchange and garner opinions that contribute to transforming the political regime in our country from totalitarianism to democracy in a non-violent manner’. The CPV’s response to this initiative will be a sign of its attitude to Vietnam’s changing political culture.

The establishment of the forum might be the first step toward regime transformation. It might also create an empty mouthpiece that brings no significant change. But if this organisation is not the catalyst, something else will be. Vietnam’s civil society is changing the country’s politics.
Hai Hong Nguyen is a PhD candidate at the School of Political Science and International Studies, University of Queensland.