Do you know enough about Indonesia? 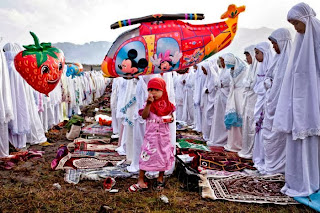 Many Australians are embarrassingly ignorant about our country's largest nearest neighbour, Indonesia. Thirty per cent of us think Bali is an independent country, a majority believe that Indonesian law is based on Islamic law and less than half of us know that Indonesia is a democracy. Encounter's Margaret Coffey presents some 'need-to-know' Indonesian facts

So, you're planning summer holidays or a post-exam indulgence, and you're thinking of Bali. Here's a challenge: why not abandon an Australian pattern and explore an unfamiliar part of the great chain of the Indonesian archipelago?  You can always stop off in Bali on the way home.
I think one of the fascinating things about Indonesia perhaps compared to some other Muslim majority contexts, is there is still very much room for debate—debates about religion and the regulation of religion are still very dynamic.

For all the news Indonesia has been making in Australia, what with turning back boats, developing trade deals, and prime ministerial visits, Australians badly need to sharpen our understanding of Indonesian cultures, geographies and politics.

There is a national election coming up next year in Indonesia, and its outcome could re-balance aspects of the relationship between Australia and Indonesia.

Do you know that Indonesia has one of the fastest growing economies in the world? That Indonesian law is not based on Islamic law codes? That it is a democracy? A survey conducted this year by Newspoll on behalf of the Department of Foreign Affairs and Trade found that more than half the sizeable national survey group did not know these things about our nearest neighbour. This is despite the fact that thirty per cent of us claim to have visited Indonesia (including half of West Australians).


Even influential journalists slip up—on RN Breakfast, News Corp's online political editor Malcolm Farr couldn't remember whether Indonesia's majority Muslim population was Sunni or Shia. It's no laughing matter to be uncertain about the dominant Sunni religious culture of the country with the largest Muslim population in the world. One needs to know this in order to understand how Indonesia fits into one major and fateful competition within global Islam—a competition that's playing out right now in Syria and in Iraq.    (Note from Kerry.The majority adheres to the Sunni Muslim tradition mainly of the Shafi'i madhhab. Around one million are Shias, who are concentrated around Jakarta.)

Indonesia's Islam and general religious culture is one important area where we could improve our knowledge. ABC International's Dian Islamiati Fatwa says that she still comes across people who think that Muslims are Arabic and that Indonesia has implemented Islamic Shari'a law.

However, if you look at the Indonesian political landscape, she says, the Islamic political parties don't get much electoral support. She suggests visiting a Jakarta mall to see the diversity of Indonesia.

'You can see people wearing a burka or hijab and next to her is also someone with a low cut dress and very provocative style. This [is] the thing that Australians need to know—that Indonesia is not a military country, and also is not an Islamic country,' she said.

'Yes we have 190 million Muslims of 240 million [population], but it doesn't mean that we implement the Shari'a law. Even here at the ABC some of our colleagues here were surprised that I am actually Muslim. There is some misconception that Muslim women should wear a hijab—I don't need to wear hijab. My belief [is] that I need to cover my heart instead of to cover my hair.'

Islam is not static, she adds, but develops according to how local people interpret it.

Dian's Radio Australia Indonesia Service colleague Farid Ibrahim acknowledges that there are many different interpretations of Islam even in Indonesia, 'but the majority of Indonesian people I believe [are] interpreting Islam as a peaceful religion.'

It's important, he says, to acknowledge that there is concern in the country about 'hardliners'.
'I am optimistic that this minority group of hardliners, religious groups, particularly in several big cities including Jakarta are something that...will be dealt with by the majority of Indonesian people,' he says.

One Australian who is keen on educating Australians about Indonesia is University of Melbourne anthropologist Professor Thomas Reuter.

He has been so annoyed by media representations of Indonesian religious culture that he took to making a film, The Java Spirit, which presents a compilation of perspectives from Javanese religious leaders, including traditional, Muslim, Catholic, and Buddhist.

The film illuminates the tolerant character of the diverse religious cultures of Java. In fact, says Professor Reuter, Indonesia and Australia experience equally the global trends in religion; in both countries there is recognition that modernism and secularism 'leave certain matters unattended and that there is a need for religion to fill the void, but also the sense that religion must be transformed to fulfil the needs of people in today's modern society'.

Dr Melissa Crouch, Research Fellow at the Centre for Asian Legal Studies at the National University of Singapore, is eager that Australians understand Indonesian legal culture. The Indonesian justice system has a hierarchy of courts, just as Australia does, ranging from the local to the national. Indonesian law is built upon Dutch law, customary adat law and more contemporary Indonesian-made law.

'I think one of the fascinating things about Indonesia perhaps compared to some other Muslim majority contexts, is there is still very much room for debate—debates about religion and the regulation of religion are still very dynamic; there is still the possibility of change and of positive reforms in the future that could turn things around and provide greater protection for all religious groups but particularly for religious minorities,' says Dr Crouch.

And as for Indonesia's system of government, Dian Fatwa describes the country as 'a party for democracy—there are more elections in a year than there are days!'. Farid Ibrahim adds: 'We have a voter turnout of around 70 or 80 per cent out of 170 million voters in every term of government. And not only on national level—we have a direct election electing the district level mayors, and the governor of provinces and the president of the republic of Indonesia. And we have a free press!'

Dian and Farid's advice? Go to Indonesia, go to different places, learn a little Bahasa, and if you have more time you can also volunteer yourself as English teacher—the local people would welcome you. ABC Australia (Photo by Ulet Ifansasti/Getty Images) Courtesy Joyo News