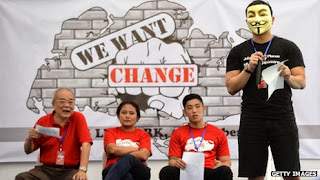 When I was living in Singapore 13 years ago, the government was debating a decision that in other countries might have seemed rather trivial: whether or not to permit a version of Speakers' Corner, the spot in London's Hyde Park where individuals vent their opinions on whatever topic they choose to whoever wants to listen.

The year before, the then-Prime Minister Goh Chok Tong had worried that his country was not ready for such an innovation. But in September 2000 a location was finally approved, in Hong Lim Park, near the city centre.

Being Singapore, this "free speech forum" was a regulated one. Speakers needed police permission before they could use the space.

Like so many other aspects of Singapore's "disciplinarian" state, their Speakers' Corner provoked plenty of wry comment by foreign journalists. Few people turned out to hear the first anodyne speeches. The common assumption was that Singaporeans were not interested in risking trouble with their government by listening to speeches. They would rather go shopping.

But guess what? Speakers' Corner has become the venue for a number of quite lively demonstrations recently, over an issue which has provoked more debate than at any time since the country's tumultuous birth 48 years ago - immigration.

Those demonstrations, though, are still subject to regulations. They cannot say or do anything that might stir up racial tension or disturb public order.

The really heated debate has been on the internet - howls of anguish by self-styled "heartlanders" - original Singaporeans - and vitriolic denunciations of the ruling People's Action Party over the rapid rise in the number of foreigners, both low-wage immigrant workers and the wealthy individuals from the rest of Asia who now view Singapore as a safe-haven for their millions.


Public outcry
Foreigners now make up close to 40% of the 5.3 million-strong population. They are blamed both for the stratospheric rise in property prices and for squeezing local people out of jobs.

Prime Minister Lee Hsien Loong said three years ago he was quite happy to invite the world's richest man to live in Singapore, if it increased the country's net wealth.

But the conspicuous presence in Singapore today of so many of the world's super-rich is leaving many lower-income people feeling left behind.

That debate reached boiling point earlier this year when a government white paper predicted that by 2030, the population would expand to just under seven million, of which only a little over half would be Singaporeans.

The public outcry prompted the government to issue a clarification; the figures were a forecast, not a target, it said.

This might seem odd for a country which is after all built on immigration, and which has already achieved the world's highest per capita GDP. But it is part of a wider sense of unease you hear being expressed over what, and whom, Singapore is for.

Goh Chok Tong has called it Singapore's "mid-life crisis". It helps to explain the success of a younger generation of opposition politicians at the last election in 2011.


Asian values
With its share of the vote dropping to just over 60%, the ruling PAP had its worst result since independence. It is worth remembering that Singapore is as much a concept as a country, an artificial creation forced on its people by its expulsion from Malaysia in 1965.

It is a tiny city-state in an era of nation states. It does not have great historical narratives or national myths to define its existence. Instead it has always been defined by the performance of its government, both in utilising the limited living space and resources it has, and in ensuring better living standards for its people.

The manner in which the government does this was set down by Singapore's domineering founding father, Lee Kuan Yew. He imposed top-down, rigorously-planned modernisation, with curbs on individual freedom - a government-knows-best strategy he later described as "Asian Values".

The best and brightest were attracted to the top ranks of the PAP and the government with generous salaries to carry this out. If this is a nanny state, he wrote later, then I am proud to have fostered one.

For decades Singaporeans accepted this arrangement, with only minor grumbling. Not any more.
Bukit Brown is an old Chinese cemetery, close to the centre of the island. Some of the earliest Chinese settlers to arrive in Singapore, when it was a British-ruled trading colony, are buried there. They include Lee Kuan Yew's grandfather.

The elaborate tombs and gravestones are a rich historic resource, in a country which has lost much of its heritage in the name of progress. It is also a wonderfully overgrown green space in a mostly built-up city.

The government currently plans to drive a four-lane highway through the cemetery to ease traffic congestion.

In years gone by this might have gone through with only a few mutterings of complaint. This time the government's plans have run into a sophisticated civic protest movement.


Income gap
"The way the government works is always to frame the issue as heritage versus development, and nothing in between", said Catherine Lim, who co-founded one of the Bukit Brown conservation campaigns.

"What we're trying to do is reframe the conversation to include heritage as part of development. I think they realise these things are important. This sense of loss for many Singaporeans who have lost the familiar landmarks they grew up with, it's also very much to do with the fact that we are almost like a foreign country now - we have so many foreigners."

The government has not altered its plans yet. But there was a striking change of tone, if not direction, in the annual independence day speech given this year by Lee Hsien Loong, who happens to be Lee Kuan Yew's son.

Gone was the typically confident list of achievements by the PAP, now in its sixth decade in office.

Instead, Mr Lee offered a frank acknowledgement of the unhappiness felt by many lower-income people. Singaporeans, he said "are feeling uncertain and anxious" because "technology and globalisation are widening our income gaps and in addition to that, we have domestic social stresses building".

Our country is at a turning point, he said. "I understand your concerns. I promise you, you will not be facing these challenges alone because we are all in this together."

There was talk of better access to education, of wider healthcare cover, and more access to low-cost housing. There seemed to be an effort in the speech by Mr Lee to offer empathy, rather than statistics, a realisation that the Mandarin-style meritocracy built by his father may no longer be enough to retain the loyalty of Singaporeans.

In a statement to the BBC a government spokesman re-iterated the long-standing belief, that as a small, open economy, Singapore must remain open and connected, for trade or talent flows.
But, the statement said, "we are deliberately slowing our foreign workforce growth rate. This will also slow economic growth, but it is a compromise we need to make to continue to give Singaporeans a high quality of life."

"I see that the government is changing," said Mallika Naguran, who runs a sustainability website called Gaia Discovery.

"They are becoming more transparent, more approachable, taking definite steps towards sustainability. Yet this could still improve. There could be more openness in policy-making, more access for civic groups to become stakeholders in nation-building".


Where now?
The passing of Lee Kuan Yew, who has just turned 90 years old and is in frail health, will be another turning point for this micro-state, a moment when its citizens will once again contemplate their uncertain future.

The elder Mr Lee has always taken a pessimistic view of his country's vulnerability. He wept publicly when it was ejected from Malaysia and has repeatedly warned his citizens not to relax their vigilance, whether it was against communist subversion in the 1960s, or against the declining birth-rate in the 21st Century.

In one of his most recent statements he pondered gloomily whether Singapore would even exist in 100 years time. It was down to the competence of the government, he said. If we get a dumb government, we are done for.

That view is being increasingly challenged, mostly within the relatively safe confines of the internet, but with vigorous, sometimes angry exchanges of views.

The era of government-knows-best is slowly coming to an end in Singapore. No-one is quite sure what will take its place.By Jonathan Head South East Asia correspondent, BBC News