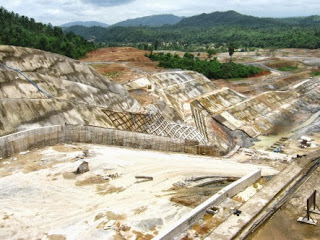 Myanmar’s fledgling reforms have attracted significant Western interest. But they have also brought thousands of land claims by ethnic villagers

There’s no doubt that Myanmar is a country in transition. Even its harshest critics admit that the government is initiating reforms. Laws have been passed that allow participation in politics and increased media freedom. Many political prisoners have been freed, travel restrictions have been eased and ceasefire agreements have been brokered with ethnic armed groups.

The development surge and the laws that enable it have also seen the seizure of swathes of natural resource-rich land in border areas where ethnic communities are being dispossessed by “development projects” initiated by powerful interest groups – the military, corrupt officials and business elites.

Losing Ground, a comprehensive report by the Karen Human Rights Group released in Bangkok earlier this year, documents this displacement through data collected by field workers between January 2011 and November 2012. Saw Albert, the KHRG field director, provides details of the abuse, destruction of property, pollution, theft and confiscation of land. He opens the report and points to the testimony of a female villager, Naw L—, 54, from T’Nay Hsah Township.

“Since [Burma Army] Battalion #549 came and based here, my properties are gone and no one has pity on me. One thing starts to belong to the battalion, then two things belong to the battalion. You go back to your plantation and they ask, ‘What kind of paper [and title] do you have? This is military land. It all belongs to the military.”

Saw Albert, who has spent months on fact-finding trips inside Karen State points out that 50 field and community workers, under the supervision of KHRG, collected 2,534 pieces of information, including 1,270 oral testimonies, 523 audio interviews and thousands of images and written orders issued by civilian and military officials.

Some 809 of these documents were translated into English and analyzed to form the report, which found that land confiscation and forced displacement occurred without “consultation, compensation or, often, notification.”

Saw Albert confirms that since their report was released earlier this year and tells The Diplomat that little has changed for villagers fighting land grabs and said.

“The government’s Land Acquisition Investigative Commission is toothless. Villagers were hoping the Commission would solve their problems, but it has no power – it can only document complaints. These land disputes have the potential to cause huge problems if the rule of law in rural areas is not applied fairly.”

A KHRG interview in June 2012 with a Hpa-an District villager identified as Saw N—, shows the powerful forces lined up against villagers to stop them securing ownership of their land.

“This year the Tatmadaw [Burma Army] will completely confiscate the land and ask us to sign it away. Here you see they type the words as if they are the landowner. They ask us to sign but we didn’t sign. Now, they pressure us and they said, if we don’t sign, they would report us to the police, DKBA and Peace Council [ethnic armed militia] who will arrest the villagers.”

Saw Albert explains that during KHRG’s reporting period, villagers in all its seven geographic research areas had land confiscated as a result of “natural resource extraction.”

“It Will Get Worse for Ethnic People…”

Professor Desmond Ball of the Strategic and Defence Studies Centre at the Australian National University in Canberra says that while current democratic reforms in Myanmar are encouraging, he fears that in the short-term, the situation in some of the country’s ethnic areas will get worse.

“Local companies, often owned by Army personnel and backed up by Army units, will unquestionably move to displace ethnic peoples from land that might hold valuable minerals, or farmland expanses that can be used for commercial rice, rubber and corn plantations, or areas usable for important and profitable infrastructure projects.” By Phil Thornton for “The Diplomat” Photo Credit: KHRG