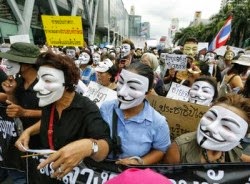 Look at a map of western Nakorn Sawan and Kamphaengphet provinces, north of Bangkok, and you will see a long, narrow mountain ridge running from North to South.

In the middle of this ridge is a narrow gap, through which runs the Mae Wong River, forming the provincial border. But look at this place through the eyes of an engineer, and what you see is a perfect location for a dam. Just plug the gap where the ‘mountains collide’ (the meaning of the Thai name for the location, Khao Chon Kan), and hey presto — you have a reservoir to hold back floodwaters in the wet season and irrigate downstream croplands during the dry season.

This is exactly what engineers saw and planned some two decades ago when they first proposed the Mae Wong Dam. But that was not an auspicious time to build dams in Thailand. The hydro-power and irrigation authorities were at a disadvantage in the face of opposition from a nascent environmental movement. Back then, the movement was flush with its successful opposition to the much larger Nam Choan Dam in a wildlife sanctuary to the west of Mae Wong, bitter from its failure to stop the Pak Mun Dam in the Northeast, and grief-stricken from the suicide of Seub Nakhasathien, one of its champions, following encroachment on the Huai Kha Khaeng Wildlife Sanctuary that he had managed.

Fast forward to 2013. Mae Wong Dam is once again in the news, thanks in no small part to the Seub Nakhasathien Foundation that was established more than two decades ago in Seub’s memory. Opposition to the proposed multipurpose solution to the country’s floods and droughts has brought environmentalists onto the streets of Bangkok in numbers that have not been seen for quite some time.

But things have changed. For a start, close examination of the engineers’ plans shows that the proposed dam site has shifted several kilometres upstream to the West. And these days, environmental politics are tinged with colours besides green. The Mae Wong controversy has not escaped Thailand’s red–yellow political divide. These two sets of changes are linked in some intriguing ways.

The new site of the dam is at the eastern edge of Mae Wong National Park. It would therefore flood part of a protected area at the eastern boundary of the magnificent Western Forest Complex, a system of contiguous national parks and wildlife sanctuaries that maintain mainland Southeast Asia’s largest and biologically richest area of lowland forest. By moving the site westward from Khao Chon Kan, the Royal Irrigation Department will avoid flooding villages and croplands that have been opened up from the forests and settled over the past several decades. But by that same token the new reservoir location will encroach on tiger, gaur (a species of wild cattle) and elephant habitats.

The dam itself begs the question of where the government’s priorities lie: protecting forests or flood-proofing Bangkok? But the alternative locations potentially raise even more divisive questions: do the authorities prioritise protected wildlife habitats or poor Thais’ homesteads?

The crowds on the streets of Bangkok are mainly urbanites, who have another reason to protest besides their genuine concern for Thailand’s much-diminished wildlife, and its promising recovery in a few places including Mae Wong. They also dislike the main political champion of the dam, Deputy Prime Minister Plodprasop Suratswasdi. Plodprasop has long been a controversial figure for environmentalists, and his senior position in a government associated with Thaksin and brought to power with red shirt support is, well, a red rag to a gaur.

All this means that the old defence against elite environmentalism by development-oriented politicians is more prone than ever to employing the old it’s-nature-or-us rhetoric. Plodprasob was quoted as saying, ‘I choose the lives and safety of Thai people. A forest can be constructed, wildlife bred. But if there is another flood there won’t be Thai people’.

Yet the biggest provocation of all may be the suggestion from the NGOs and government persons alike that building the dam would be acceptable if it is only ‘disturbed’ (and by implication occupied) land and not forest that is flooded. Sasin Chalermlarp, the General Secretary of the Seub Nakhasathien Foundation, whose 388-kilometre walk from Mae Wong to Bangkok galvanised the recent street protests, told the Bangkok Post that he would not oppose the dam if it was built outside the national park. And a key government spokesperson for the environment, Santi Boonprakub, secretary-general of the Office of the Natural Resources and Environmental Policy and Planning, stated that the problem could be solved by moving the dam back to Khao Chon Kan —saving wildlife, and flooding only the homes and fields of people who, by rights, should not be there anyway, since the area used to be a nice forest.

Like broad-based environmentalism around the world, Thailand’s environmental movement was never a simple, unified entity, except ephemerally around opposition to major projects such as Nam Choan Dam.  The seemingly endless and entrenched red/yellow politics, and the schisms in value systems that they represent, suggest that green concerns are as deeply mired as ever in the complexities of the country’s socio-political transition — along with other areas of public life and civil strife.

Philip Hirsch is Professor of Human Geography at the School of Geosciences and director of the Mekong Research Group, University of Sydney.