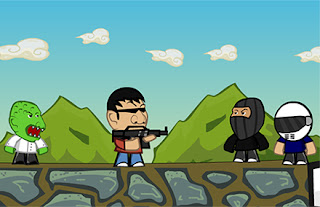 A screenshot from the app.

“Let’s get Rody to rumble and be part of Duterte’s journey!”

This is the tagline of the new gaming app, “Go Duterte”, which allows you to play as macho presidential candidate Rody Duterte as he slinks the streets of the Philippines, killing criminals and corrupt politicians while unlocking a sophisticated arsenal.

Duterte, the polarising and popular mayor of Davao, entered the Philippine presidential race at the last minute in a move which jolted all other contenders/pretenders. He is well known for transforming Davao from a crime ridden and corrupt city to one of the safest in the world, trailing only Osaka, Seoul, Singapore and Bursa (that’s in Turkey in case you hadn’t heard).

However, some of the legend may be more fiction than fact. Duterte is also widely despised by human rights groups for his links to death squads in Davao which have been used to eliminate crime.