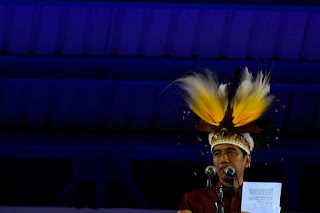 
Six months after President Joko Widodo announced that foreign media would have unimpeded access to Papua, Indonesian authorities continue to hamper reporting from the region in various ways, Human Rights Watch said in a report launched on Wednesday.


Phelim Kine, deputy Asia director at Human Rights Watch, told a press conference in Jakarta that even though the Indonesian government has legitimate security concerns, its broad-brush measures are actually frustrating resolution of the low-intensity conflict in the area.


According to Kine, there are three elements to the "enforced isolation" of Papua and West Papua: the lack of a transparent process due to a vast bureaucracy, active resistance from elements within the government and intimidation of local journalists there by the authorities, which often leads to self-censorship.


The HRW report, titled "Something to Hide? Indonesia's Restrictions on Media Freedom and Rights Monitoring in Papua," is based on interviews with more than 100 journalists, editors, publishers, NGO representatives and academics.


It details people's experiences in trying to gain access to the remote region and the problems that those who succeed continue to face, such as being followed by official minders or sources being arrested.


Atmakusumah Astraatmadja, a media activist who founded and chaired Indonesia's first independent press council, said he was particularly worried about the lack of in-depth reporting from the region by major Indonesian news organizations.


"I wish the big media in Jakarta would be more concerned about Papua," he told Wednesday's press conference, arguing that the problems can only be solved if there is independent reporting from the region.


Atmakusumah cited the example of Aceh, which for decades was the scene of a bloody struggle for independence led by the Free Aceh Movement (GAM).


It was only after the press gained greater access to the province following the fall of the Suharto regime that policy makers in Jakarta started to understand what was going on there, he said, creating room for dialogue and ultimately resulting in a peace agreement signed in 2005.


But with regard to Papua, the "New Order paradigm" is still in place and that has to change if the government is serious about solving the problems in the restive, resource-rich region, Atmakusumah said.


In its report, HRW is calling on the president to issue a decree that formally lifts restrictions on foreign media access to Papua and West Papua and that directs all relevant government stakeholders to comply with such a Presidential Instruction.