The building of infrastructure in Indonesia is the key to understanding the extent of progress in the country. 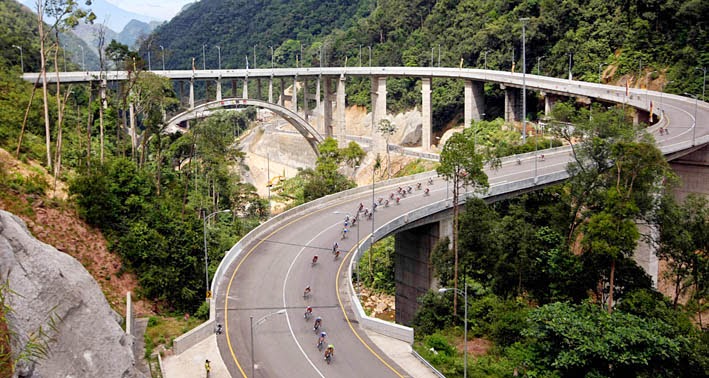 
The building of infrastructure in Indonesia is the key to understanding the extent of progress in the country.


During the World Economic Forum on East Asia, a question will be asked: Is Indonesia doing enough to show the public and investors they can trust that infrastructure development is moving ahead toward growth and becoming competitive in the region.


Indonesia, meanwhile, has been given the opportunity to showcase development and attract investment while playing host to the WEF event.


The administration of President Joko Widodo has set an infrastructure target, to be achieved by 2019, in which 24 seaports, 15 airports, power plants with a capacity of 35,000 megawatts and nine million hectares of agriculture land will be developed.


This was reiterated by WEF Indonesia committee member and Trade Minister Rachmat Gobel in a recent briefing to ambassadors and prominent business leaders.


The administration is confident in its programs to build dams, toll roads and railways to boost the local economy and raise the living standards of local communities.


Joko traveled to Aceh in March to inaugurate a number of projects in the area.


In North Aceh, he presided over the groundbreaking of the Keureuto dam — the largest to be built this year and expected to increase agricultural output in the region.


The construction of the dam will allow the irrigation of other regions which are in a deficit of rice production.


The dam is being built by state-owned construction companies Brantas Abipraya, Hutama Karya and Wijaya Karya.


It will hold 167 million cubic meters of water and irrigate 4,768 hectares of agricultural land. The reservoir will also prevent flooding in the downstream region.


Joko then moved on to Sabang, Indonesia’s most western tip, where he jump-started the construction of the Seunara reservoir, which has been stalled for more than nine years due to land clearance issues.


The issue was eventually solved as Joko negotiated with over 200 local residents who had been holding out for a larger compensation package.


“After talking to the residents, they have no problem. We have the budget, what’s important is the reservoir will be completed this year and function,” said Joko, who was accompanied by Aceh Governor Abdullah Zaini and Public Works and Housing Minister Basuki Hadimulyono.


The reservoir will provide water and help the local community boost income through the development of water tourism and aquaculture.


“He has quickly recognized the serious issue of lack of water storage across the country and acted on it. It is also positive that he has inaugurated the long-defined Keureuto project.


“With this early action it would seem that the president will certainly be trying to meet the target of 13 dam projects for this year,” Younger said.


But, he says, the longer-term concern is the lack of engineering and construction industry capacity to carry out all the work planned in the administration’s term, not just in water storage but across the infrastructure space as a whole.


Undaunted, the president pressed on to Lhokseumawe, the home of Kertas Kraft Aceh.


The company stopped production years ago, but the president has voiced he would like to see it running again as to contribute to the local economy.


“For more than 15 years I have wanted the company to be in operation again. There is adequate supply of raw materials from the forests which can be managed by the local people.


The president is no stranger to Aceh. He spent his early working years there and his first child was born in the province.


“Ibu Jokowi and I are very familiar with Aceh,” he said.


In Arun, just north of Lhokseumawe, the president launched the Arun regasification and storage terminal, marking a milestone in the country’s efforts to shift its energy consumption toward gas.


“The facility will regasify LNG sent from Kilang Tangguh in Papua,” Pertamina Gas president director Hendra Jaya explained, adding that the plant will provide the state electricity company with gas to power its generators in Belawan, Medan.


Joko’s initiative in Aceh marks a significant move in the nation’s infrastructure building, no president before him has had a similar strategy.


This year, the administration is at work building at least 13 of the projected 49 dams it wants to construct over the next five years. The cost of the 13 dams will be at least Rp 12 trillion ($934 million), excluding land-clearance costs. The projects will be funded by the state budget.


Rising transportation and logistics costs have also won the attention of the government.


Many toll roads are to be constructed and work on the 2,700-kilometer Trans-Sumatra toll road, which will link Aceh and Lampung, is due to start this month.


The government has assigned Hutama Karya to undertake the project, as it is the only large state infrastructure firm not listed on the stock exchange.


Construction of the road has been estimated to cost Rp 300 trillion, with the government asking other state enterprises and local governments to cooperate without reservation.


The first stage of the project is to build 1,300 kilometers of road. Hutama Karya has been given an additional injection of funds by the government to get the job done.


Earlier Hutama Karya and other state enterprises, including banks, were ready to finance the project without relying on the state budget but the government deemed it would create too much of a burden.


During the previous administration of president Susilo Bambang Yudhoyono, the project was also to be managed by Hutama Kaya. The project proved difficult to get started due to financial concerns with investors reluctant to commit to such a long-term project.


The focus then turned to building the Medan-Binjai toll road, but that plan has also changed, with the focus now on the link between Bakaheuni in Lampung and Palembang, the capital of South Sumatra.


An important part of the decision was the revision of the previous presidential decree number 100/2014 which put an emphasis on land acquisition as a priority.


“The project will be done in sections. For instance Waskita Karya will do section 1, Wijaya Karya section 2 and so forth, Part of it will hopefully be completed in 2018,” she said, adding that some sections of the road will be commissioned by local governments involving the private sector.


Following Joko’s pledge last year to develop railways in Papua, the Transportation Ministry will allocate at least Rp 105.6 trillion over the next five years to build railway networks beyond Java.


“We have evaluated the budget needs of the Directorate General of Railways at the ministry for the next five years and according to the new master plan pushed by the president, completion of the project is slated for 2019,” Director General for Railways Hermanto Dwiatmoko said.


The plan may appear ambitious but Hermanto insisted that the project will begin in 2016.


It will contribute to what will become a total national railway network stretching 3,258 kilometers and be the longest railway project since the Dutch occupation of Indonesia.


Meanwhile, a feasibility study for the construction of the Trans Papua Railway has already begun. The new railway track will span 595 kilometers connecting Sorong and Jayapura.


Home Affairs Minister Tjahjo Kumolo said that development outside Java is one of the president’s priorities.


“There are many regions and border areas which are still untouched by infrastructure development.


“The president is committed to developing the eastern part of Indonesia where infrastructure is less developed.


“We at the Ministry of Home Affairs have reached a consensus with the Ministry of Public Works to support and develop infrastructure mainly in Papua, East Nusa Tenggara and the Kalimantan border areas,” he said.


House Commission V members who have visited Papua to see the prospective railway plan say they back the government’s initiative.


They have also encouraged the people of Papua to support it.


At the local level, regional officials have discussed the railway project with the central government but still have questions about the source of finance.


“We will have certainty on that in one or two months,” said regional secretary Ella Loupatty.


“We think that the project will begin from Sorong in West Papua and connect the Sarmi district in Papua province. If the project is realized, the distribution of goods will be easier and prices will go down in many areas.”


Hermanto added that he had asked regional officials to help in the process of land clearance, which poses one of the major hurdles to any infrastructure project.


He believes it is feasible to complete the Papua railway project within five years.


“We expect the project to be expedited although we note that any infrastructure development in Papua is not easy. But, we can’t delay it,” he said.


Without the development of better infrastructure in the area, the price of cement could go as high as Rp 2 million for a 50 kilogram sack, while basic commodities such as sugar could cost between Rp 15,000 and Rp 50,000 a kilogram, many times over the price for such staples on Java.


Commenting on the rail plans, Younger, the infrastructure expert, says the target dates are highly optimistic.


“While railways must be part of the transportation infrastructure build-out, an emphasis for off-Java railway construction seems difficult to reconcile,” he says.


“There is still much to do in rail in Java and especially around the main urban centers, such as Jakarta and for fast rail links between the major cities. Railways make sense when there are many people and/or a large volume of commodities to transport.


“Java and off-Java highly-populated centers, such as Medan, fill the first criterion and off-Java in certain specific locations for the movement of commodities.”


And, he adds, the public-private partnership concept has been around for more than a decade, but a workable model is still to be found.


More needs to be done to encourage private investment.


Meanwhile, a number of countries in the East Asia region such as Singapore, Japan, and China have expressed interest to invest power plants projects in Indonesia, according to the Investment Coordination Board (BKPM).


The BKPM has received 12 new applications for investment permits from foreign investors to build power plants worth $8.9 billion, or around Rp 116 trillion.


It’s not just foreign investors looking towards Indonesian infrastructure — many domestic investors are interested as well.


GlobeAsia and the Jakarta Globe are media partners of the World Economic Forum on East Asia. Parts of this article originally appeared in the April issue of GlobeAsia.