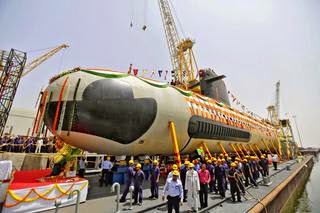 
On March 5, Reliance Infrastructure paid $132 million for an initial stake of 18% in Pipavav Defence and Offshore Engineering, the country's largest shipbuilding and heavy industry company. It wants to increase its share to at least 25.1% in order to take control, with the intention of becoming "the country's biggest defense manufacturer."


The Reliance group subsidiary is also in talks with Eurocopter of France, Kamov of Russia, and Sikorsky of the U.S. about technological tie-ups. Company sources said that the company plans to bid for upcoming tenders to make hundreds of military helicopters valued at about $4 billion. If it wins the contracts, the helicopters will likely be made in a proposed 5,000-acre defense and aerospace infrastructure facility called Dhirubhai Ambani Defence Park -- named after the billionaire's father.


Ambani is facing competition from a slew of other domestic companies also eyeing a larger share of a sector estimated to generate $100 billion in revenue over the next 10 years. Not least from his older brother Mukesh, who helms Reliance Aerospace Technologies and has a tie-up with France's Dassault Aviation. He harbors ambitions to become one of the country's largest manufacturers of combat jets.


Tata group, Mahindra & Mahindra, Larsen & Toubro, Punj Lloyd and Bharat Forge are also fighting for a bigger slice of an industry expected to generate $100 billion in revenue over the next decade.


Such frenetic activities by private players in a secretive industry would have been inconceivable a few years ago when the landscape was dominated by public sector behemoths like Bharat Earth Movers, Bharat Electronics, Electronics Corporation of India, Hindustan Aeronautics and Mazagon Dock.


But the right-wing Bharatiya Janata Party, which assumed power last May, promised in its election manifesto to beef up the country's defense industrial base and has shown signs of being receptive to the private sector. It has also allocated 12% more of its budget to the military compared with the interim budget tabled by the previous government in February 2014.


Prime Minister Narendra Modi generated a lot of excitement by announcing on Apr. 10 that India would buy 36 fighter jets from France's Dassault Aviation, but his government had earlier shortlisted Larsen & Toubro and Pipavav Defence for a $10 billion contract to build six submarines -- thought to be a far bigger order.


According to a 2013 McKinsey study, "Bright Future for India's Defense Industry?," there is huge potential in India's military manufacturing sector in the long term. Growth in domestic demand should continue to be robust, the government has a clear vision for an indigenous defense industry and the country is an attractive manufacturing base for defense companies worldwide due to shrinking budgets globally. There is tremendous export potential in engineering services and component sourcing as well, states the report.


Until now, the Indian defense sector looked weak due to lack of competition, said professor Seeram Chaulia, dean of the Jindal School of International Affairs. "Lack of competition in the field had created an undesirable monopoly for the public sector undertakings who were selling only to the armed forces. Their complacency led to cost and time overruns and low quality products. Worse, the [public sector companies] were hand-in-glove with foreign sellers who were pushing billions of dollars worth of merchandise upon us," he said.


This could all change with more private players in the field and the government pushing for a larger indigenous defense sector, he added.


Another desirable fallout of this development, add experts, is that the transparency of participants -- most of which are publicly listed -- could help end the endemic corruption in defense procurement processes. Suppliers are known to pay kickbacks to corrupt officials, they say, and that has slowed the modernization of India's armed forces, which often still relies on archaic Soviet-era equipment.


Though the industry started to change and modernize under the previous Congress-led government, the bulk of the country's military equipment is still imported.


India is the world's largest importer of defense equipment, spending $40 billion annually on military purchases. An IHS Jane's report notes that Asia's third-largest economy is poised to become the fourth-largest military spender in the world by 2020, surpassed only by the U.S., Russia and China.


India's dependence on imports will be whittled down by Modi's "Make in India" campaign. Eventually, Modi hopes that India will also become an exporter of defense equipment.


The French fighter jet deal has left many wondering why India would make such a big overseas order when it is emphasising the development of an indigenous defense industry. A defense ministry official who requested anonymity said that the government may insist on having an Indian partner in the manufacturing of the fighter jets. "The deal offers us an honorable exit from the original exorbitantly-priced 126 aircraft deal  [with Dassault] which would have drained the exchequer," said the official. But detractors say the decision has damaged Modi's "Make in India" campaign. Bharat Karnad, a professor at the Centre for Policy Research in New Delhi, told Reuters the Rafale deal was an "unmitigated disaster" that would not solve the needs of the air force, offers India nothing in the way of technology transfer and diverts funding from building an Indian-made fighter jet.


The industry already employs thousands of people, according to Modi when he spoke at the opening of Aero India 2015 in February. "This is despite the fact that nearly 60% of our defense equipment continues to be imported. And, we are spending tens of billions of dollars on acquisitions from abroad. There are studies that show that even a 20-25% reduction in imports could directly create an additional 100,000 to 120,000 highly skilled jobs in India," he said.


To facilitate foreign and private participation, the Modi administration last year said it would allow foreign investors to own up to 49% of the equity in Indian defense companies. Other regulatory changes include removal of restrictions on the issuance of annual industrial licences, and those on the sale of controlled products by publicly owned companies to private ones, as well as the decision for the military to order $250 billion of equipment.


This may come as a breath of fresh air for disenchanted foreign suppliers who often express frustration while doing business with the public sector in India. Last month, Textron, an American industrial conglomerate planning to bid for contracts to make two kinds of military helicopter in India, admitted that it would only partner with a private company.


To build a cohesive defense infrastructure, Modi urgently needs to focus on the research sector, which has stifled innovation and the infusion of fresh ideas, say analysts. The country's premier research organization -- the Defense Research and Development Organization -- and state-owned Hindustan Aeronautics are often criticized for delays and cost overruns in military programs. The Comptroller and Auditor General last December chided Bharat Earth Movers over its failure to make India's own version of the missile-carrying Tatra trucks, a target that should have been achieved a quarter of a century year ago.


A recent report by the Confederation of Indian Industry and Boston Consulting Group states that if India is to achieve its target of lifting its manufacturing sector to account for 25% of gross domestic product, the defense sector has to take the lead.


"The entry of private players is just the beginning. We require a clear policy and a strong focus on implementation to build a world-class defense industry ecosystem that could cater to both the local and export demand," he said. NEETA LAL, Contributing writerIndia 40