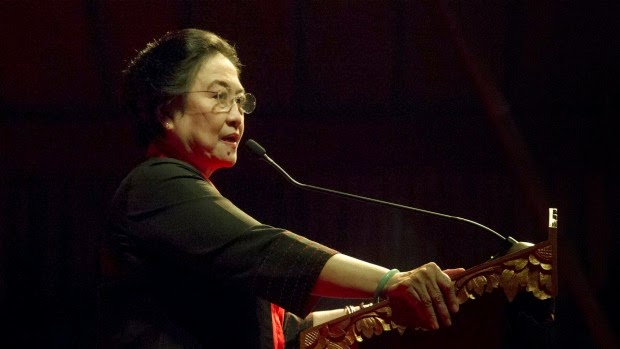 Megawati Sukarnoputri gives a speech at the PDIP congress in Bali earlier this month. Joko Widodo, of the same party, was not invited to speak


Here was the new face of Indonesian democracy, whose inauguration on October 20 signalled a break from the corruption-tainted past and a fresh beginning.


Six months later, Jokowi, as the president is called by just about everyone, is still making international headlines but now it's for all the wrong reasons.


Earlier this month "Joko: I don't read what I sign" became a worldwide trending topic on Twitter, after the president admitted he had signed off on a controversial regulation without reading it.


The regulation would have entitled state officials, many of whom are already provided with work cars, to a 211 million rupiah ($21,000) down payment on a car.


Surely this regulation was anathema for a president who flies economy, pledged to end cronyism and ordered officials to lead simpler lives?


Jokowi quickly recanted but his plaintive excuse - "How can I be expected to read everything?" - was pilloried on Twitter, the social media platform embraced by more Jakartans than residents of any other city in the world.


Before long Jokowi was being compared to Arnold Schwarzenegger in The Simpsons Movie, who unwittingly traps the town of Springfield under a glass dome because: "I was elected to lead, not to read".


Jokowi's gaffe seemed particularly baffling given that he told Time magazine, in that same edition proclaiming him the new hope, that it was very important to be "detail-orientated". "Check, check, check and then check again".


It's been an indisputably rocky couple of weeks for the Indonesian president. Earlier this month he received an humiliating - and very public - dressing-down from his patron, former president Megawati Sukarnoputri, who leads Jokowi's party, the Indonesian Democratic Party of Struggle (PDI-P).


At the PDI-P national congress in  Bali, she ordered Jokowi to toe the party line in a pointed message widely interpreted as "I'm the boss".


Jokowi, who attended as an ordinary cadre wearing party colours, wasn't even invited to speak.


To top it off, Jokowi's sliding popularity in the polls has prompted calls for a cabinet reshuffle to improve the government's performance.


An Indo Barometer poll on April 6 revealed that in the first six months of Jokowi's presidency, satisfaction with his performance had slumped from 75 per cent to 60 per cent.


To be fair, these are still personal approval ratings that Australian Prime Minister Tony Abbott could only dream about.


But it is some of Jokowi's most vocal supporters who have become the most disillusioned.


Last year, for the first time in its history, the English language Jakarta Post newspaper endorsed a candidate in the election, backing Jokowi over his hardline opponent, former military general Prabowo Subianto.


Jokowi's election "has raised hopes among people that there will be change," senior editor Endy Bayuni told Foreign Policy magazine.


But the honeymoon didn't last long.


By January 25, Bayuni was tweeting: "(Former president) SBY all is forgiven. Please come back and help clear up the mess."


So what has gone wrong for the president in whom so much hope was invested?


For Yohanes Sulaiman, a political science lecturer at the Indonesian Defence University, part of the problem has been managing unrealistic expectations. Jokowi's election was seen as a definitive break from the past.


He promised nothing short of a "mental revolution"; a political system that was free of corruption and intimidation. He vowed his cabinet would be chosen on merit instead of filled with lacklustre political appointees. He would cut red tape, improve social welfare, health and education, invest in infrastructure and increase economic growth to 7 per cent by 2018.


"He was a new guy, who said: 'I am going to change everything, I'm going to make life better," Sulaiman says. "He was pretty much a blank canvas. People painted on him what they wanted him to be - a human rights advocate, an anti-corruption reformer...."


The political reality is of course much trickier.


Jokowi is not the leader of his own party and therefore must pay homage to his patron, Megawati. He also has to work in a Parliament controlled by the opposing Coalition. 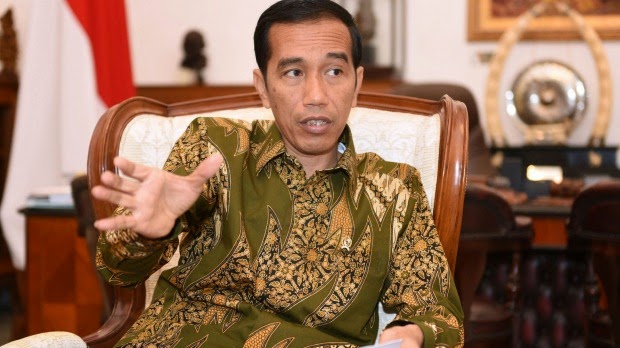 "I think Jokowi faces a unique challenge in the democratic era in that he is a complete newcomer to national politics and rose to power without the complete support of his own political party," says Dave McRae, a senior research fellow at Melbourne University's Asia Institute.


High expectations and realpolitik notwithstanding, many Indonesians have been bitterly disappointed by Jokowi.


For his former supporters, the nadir was his nomination of graft suspect Budi Gunawan, a former adjutant of Megawati, for the role of police chief. Worse, Jokowi refused for weeks to withdraw Budi's nomination even after the Corruption Eradication Commission (KPK), one of the most respected institutions in Indonesia, announced he was under investigation for accepting bribes. "I expected that he would not be able to meet all those lofty expectations, but I didn't think he would make a blunder this bad," Sulaiman says.


This was a president whose mantra had been anti-korupsi, who had vowed during the election campaign to strengthen the role of the KPK and create a fear of corruption culture.


Jokowi also refused to defend the KPK when the police retaliated by charging three KPK commissioners, on what was widely regarded as trumped-up charges designed to intimidate the commission.


"However much we thought SBY (former president Susilo Bambang Yudhoyono) was indecisive, at least he defended the KPK," Sulaiman says. "Jokowi seems to be like an amateur hour." Eventually, in the face of overwhelming public anger, Jokowi withdrew Budi's nomination. However Budi was named as a possible deputy chief after he won a pre-trial motion that forced the KPK to drop the corruption charges.


"That doesn't mean he (Budi) is clean," Jakarta Post senior editor Endy Bayuni wrote in a column on April 12. "This is something we will never know unless he answers the charges in a court of law. He may have skirted the law, but the allegations will haunt him, even in his new job. What does his appointment as deputy chief, if it happens, tell us about the anti-corruption campaign?"


The legacy of the police chief debacle has been to weaken the power of the trusted anti-corruption organisation, which is believed to have never previously dropped an investigation after charging a suspect.


"Lots of people are saying on social media that the KPK doesn't even dare to go after a low level police officer anymore," Sulaiman says.


Jokowi's decision to execute 10 drug felons, nine of whom are foreigners, has not attracted the opprobrium domestically that it has in Australia and other countries.


However McRae believes his populist war-on-drugs stance is short-sighted. "When you look at the real cost of the death penalty to international relations and the distraction it has become, you have to question the thinking behind it."


Megawati once again raised suspicions that Jokowi is acting at her behest when she told an International Women's Day luncheon that drug use in Indonesia had entered a critical state and was the trigger for the spread of HIV.


"I therefore told Jokowi that those who sold drugs and who have been sentenced to death should not get their clemency pleas granted," she was quoted on Indonesian news website Kompas.


Despite the hiccups, Ikrar Nusa Bhakti, a researcher at the Indonesian Institute of Science, still gives the Jokowi administration seven out of ten after its first six months.


"We have to be fair with them," Ikrar says. "We know that this government came into existence in a completely new environment within our political system."


Ikrar believes Jokowi needs a communications manager, who can effectively explain the government's policies and decisions to the public.


He points to Jokowi's decision, soon after his inauguration last year, to slash fuel subsidies. The move was applauded by commentators but the resulting increase in fuel prices and inflation dented his popularity.


"No-one knows that the moment the subsidy stopped, the government actually saved some 240 trillion rupiah," Ikrar says. "It's huge money and to me it is such an achievement. The money can then be diverted to the poor. But people don't know about it and the government did not explain it."


People were generally also not aware that it is not until after April or May that the state budget is dispersed. "Toll road projects and sea port developments can only start providing jobs after April or May," Ikrar says.


Something for which Jokowi is famous, harking back to his days as mayor of Solo and then governor of Jakarta, is impromptu visits to construction sites, businesses and schools.


They form part of his everyman appeal but also send a strong message: he will not allow projects to stall or public servants to skive off work.


But for some even these spontaneous visits - known as "blusukan" - are wearing thin.


Achmad Wijaya from the Indonesian Chamber of Commerce and Industry recently complained that Jokowi's ministers were too busy aping the president by engaging in blusukan.


"Anyone can do blusukan," he told the Jakarta Globe newspaper. "But not everyone can form a strategy and perform."