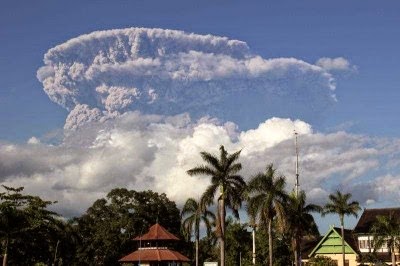 Today Australia will commemorate the centenary of the Gallipoli landing, which for many Australians symbolises one of the greatest man-made catastrophes. But there’s another anniversary this April that gives cause for reflection: the bicentenary of the eruption on 10 April 1815 of Tambora Mountain in southeastern Indonesia.


Tambora Mountain, on the island of Sumbawa midway between Jakarta and Darwin, was one of the highest in our region until 1815. It then exploded, sending an estimated 160 cubic kilometres of pyroclastic material into the atmosphere. 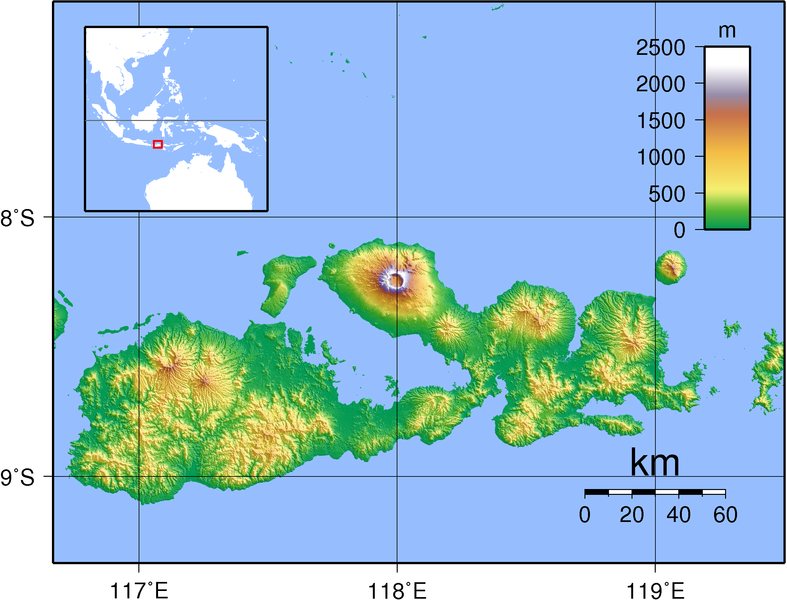 The explosion would certainly have been heard by the few inhabitants of northern Australia, since there were reports from Jakarta and more distant Sumatra. But the pyroclastic material was carried primarily westward by the prevailing winds, dropping mostly on the land and waters of Indonesia before carrying an ash cloud several times around the world.


Those directly killed by the explosion of gases and lava flows were mainly on the Tambora Peninsula of Sumbawa itself, where the explosion killed virtually everybody — thought to be 11,000 people. Speakers of the Tambora language were wiped out, eliminating what is now understood to have been by far the most westerly survival of a Papuan-type language.


At least 10 times as many died slowly of hunger and disease in the remainder of Sumbawa Island and in nearby Lombok and Bali, as agriculture was destroyed by ash deposits and lack of sunlight. The devastated population was then assailed by infestations of rats, which consumed much of the little food left.


In good times Bali was a major exporter of rice, but for two decades after 1815 its major export was slaves desperate to find food elsewhere. Only after 10–15 years of misery did the ecological curse turn again to a blessing as the ash was absorbed to fertilise Bali’s soils. Those who died of hunger in this way were not reported as victims of the volcano, any more than those who died as the ash cloud darkened skies and lowered temperatures in Europe and America.


The dearth of population figures anywhere in Indonesia before 1820 vitiates demographic attempts to calculate the loss. But using population figures to estimate the later, smaller eruptions of Krakatau (1883) and Kelut (1919) shows a missing agricultural population of a little under 100,000 from the former and well over that figure in the latter.


Why did Tambora remain so little known, despite ejecting at least four times as much material as Krakatau, the second biggest eruption of the modern era?


Krakatau was much closer to the European communication centres of Singapore and Batavia (Jakarta), while the introduction of the telegraph in mid-century had shrunk the world dramatically. Newspaper readers in Europe eagerly consumed descriptions and images of the Krakatau eruption, and some even linked it to strange weather conditions in Europe.


Tambora’s eruption was hardly reported in Europe. Only in the last 30 years have climatologists, geophysicists and historians worked out the relative scale of past eruptions through physical measurement of craters and ash deposit in polar ice cores. The dots were joined to point to Tambora’s impact on the climate.


The explosion is now understood to have lowered global temperatures by about a degree, and produced in 1816 the ‘year without summer’ in Western Europe and New England, with frosts and snowfalls in June and July. There were consequent famines in many parts of Europe, western China and North America, triggering the westward migration of New England farmers rendered desperate by the failure of their 1816 crops. J.M.W. Turner’s darkly yellow landscapes have been attributed to the Tambora eruption, and the ‘incessant rainfall’ induced Mary Shelley to stay indoors on a Swiss holiday and write her classic Frankenstein.


Although our Eurocentric memory continues to be better-informed about Vesuvius and Etna, the science now understands that it is the volcanic arc to the north of Australia that poses the greatest risk to humanity. Homo sapiens came closest to being wiped out, it is now believed, by the massive explosion in Sumatra that left the crater that is now Lake Toba, 74,000 years ago.


A fuller appreciation of the magnitude of Tambora’s effects 200 years ago would be likely to have healthier effects on our national priorities than the obsession with military anniversaries. Preparing for future mega-eruptions on the ‘ring of fire’ to Australia’s north would serve us better than feeding the insecurities that repeatedly send us off to fight other people’s wars on the false premise of an ‘insurance policy’.


It was another, smaller Indonesian volcanic eruption, Galunggang in 1982, which first alerted the airline industry to the danger of volcanic ash to passenger jets, two of which were forced to make emergency landings after engine failures caused by the ash. A mega-eruption on the scale of Tambora or Krakatau repeated in our age of mass air travel would have unimaginable consequences for global communication, isolating Australia for months if not years. There were two such mega-eruptions in the 19th century but none of equal size in the 20th.


All of this suggests that the last century and a half has been unusually fortunate for our region, but another mega-disaster of this kind should be expected in the century ahead. We may have failed to learn the lessons of Gallipoli, but 200 years should be enough to learn the lessons of Tambora and devote more of our defence budget to preparing for tectonic catastrophe.


Anthony Reid is an emeritus professor in the College of Asia and the Pacific, Australian National University.


A version of this article was first published in Asian Currents, the newsletter of the Asian Studies Association of Australia.