WHY we should be so SHOCKED by THIS picture! 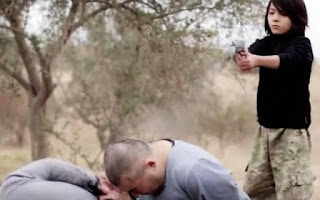 
We are watching media, a Government and its security agencies in total disarray and they are lying to us in an attempt to, of all things, placate and render comfort to the guilty.


So why the surprise that Islamic children are taught to kill non-believers (us) when the evidence is overwhelming?


Australian, Khaled Sharrouf, taught his seven year-old son the correct way to behead an infidel after which he proudly struggled to hold up his trophy.


Toddlers are dressed in battle gear and given guns. They are imbued with a fiery hatred for their hosts that can only be quenched by an act of martyrdom. 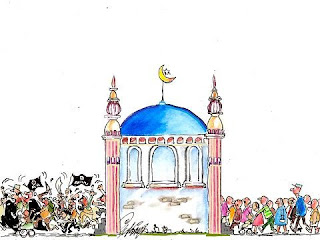 Government Ministers shake their heads in shock that a 15-year-old could commit such an act of terror on our own streets of Western Sydney, when children are being taught to kill in surrounding mosques and prayer halls.


It is inconceivable that an international terrorist group, Hizb’ut-tahrir, is permitted, unchallenged, to use Sydney mosques and book stores to recruit kids for ISIS while we are told it’s best if we not mention the word Islam... “violent extremism” is the latest politically correct nomenclature. Tony Abbott’s description of ISIS as a death cult was described as “corrosive” and highly offensive by Islamic clerics... hmmm now why would that be?


As Governments always do, they throw billions of our hard-earned dollars at every problem, increasing the bureaucratic layers of incompetence even further, rather than tackling the root cause. The root cause of terrorism is Islam, take Islam out of the equation and terrorism can’t exist!


There are the obligatory warm and fuzzy summits, inclusive of Islamic leaders, after each act of terrorism where Islamic parents are asked to kindly report “worrying” signs of jihad in their children. WTF sort of madness is that? For Christ’s sake, a martyred son means the whole family is welcomed into paradise!


Why can’t security agencies understand that children have always been an integral part of Islam’s dream of a permanent army that will achieve world dominance? Boko Haram kidnaps thousands of young girls and converts them to Islam while impregnating them. Islam allows four wives to ensure a constant supply of children... without children a cause will die!


Our Parliamentarians should each be given a copy of the Koran (even a diluted English version) and locked in the library until they have read it.


“Violent extremism” my arse! Islam is a malignant cancer that feeds off otherwise innocent young Muslims,


... and it will not be cured by simply calling it something else.


Four-time Walkley Award winning political commentator and Churchill Fellow, has returned to the fray over concern that the integrity of news dissemination is continually being threatened by a partisan media.
Posted by Kerry B. Collison at 1:57 PM