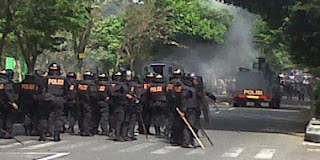 
Tensions are high among the ethnically and religiously diverse population of Aceh Singkil district, raising the risk of further religious violence in Indonesia, the world’s most populous Muslim nation.

The vast majority of Indonesians practice a moderate form of Islam, but Aceh is the only province that adheres to Islamic Sharia law, putting it at odds with the rest of the country.


“Ten churches have been identified as not having proper permits and should be closed,” said Hambali Sinaga, head of the local chapter of the hardline group Islamic Defenders Front, adding that the government had until Oct. 19 to take action.


“We hope there will be no violence again tomorrow,” he said.


A mob of hundreds of people burnt down a small church in Aceh Singkil last week, citing a lack of building permits, and forced thousands of Christians to flee to neighboring villages.


One Muslim member of the mob was killed, authorities said last week, adding that at least 10 people had been detained on suspicion of inciting violence.


The government has since deployed over 1,300 police and military personnel, with hundreds more on standby, to patrol the streets and stand guard outside other churches that dot the small palm oil plantations in the district.


“At the moment things are calm but we are on standby for any further incidents,” said Saladin spokesman for Aceh police, adding that evacuees had since returned to their homes.


Christian residents of the run-down district attended a service Sunday right next to the charred remains of their church, under the guard of about a dozen armed security personnel.


Local government officials and religious figures, including from the Christian community, are scheduled to discuss the church closures Sunday. They were not immediately available for comment. Reuters