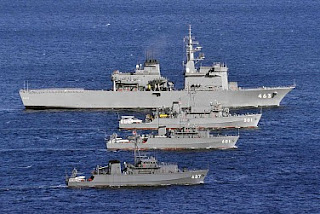 A Japanese shipyard has launched a new minesweeper for the Japan Maritime Self-Defense Force. 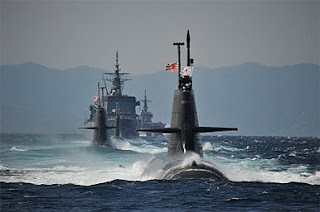 The 690-ton Awaji is the lead vessel of a new class of mine countermeasure vessels slated to replace three wooden-hulled 1,000-ton Yaeyama-class minesweepers that have been in service since March 1993.


The Awaji, named after an island in Hyogo Prefecture, boasts a new special hull made out of composite fiber-reinforced plastic in order not to set off mines with its built-in metal detecting sensors during minesweeping operations. 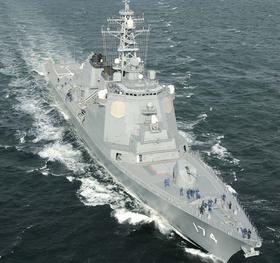 The ship boasts a length of 67 meters, a beam of 11 meters, and a draught of 5.2 meters IHS Jane’s Navy International reports. The top speed of the Awaji, powered by two diesel engines, is 14 knots according to representatives of the Japan Maritime United Corporation. The primary weapon of the JMSDF’s new vessel’s will be a 20 millimeter cannon.


Overall, the JMSDF’s current minesweeping fleet consists of 21 ships–one of the largest in the world–and has gained international renown for its expertise in “sea clearance” (the Japanese euphemism for minesweeping operations), primarily based on past missions. Japan deployed five minesweepers to the Persian Gulf in 1991 to remove 1,200 sea mines laid by the Iraqi military in the waters off Kuwait.  During the opening stages of the Korean War (1950 to 1951), Japanese minesweepers helped clear landing areas from mines for American troops and also were engaged in operations further away from the shores of the Korean Peninsula in the Sea of Japan.


JMSDF minesweeping operations were the subject of discussion during debates over two contentious security bills–based on a July 2014 Cabinet resolution reinterpreting article 9 of Japan’s pacifist Constitution–which passed the Upper House of the Japanese Diet in September 2015.


During the debates, Japanese Prime Minister Shinzo Abe repeatedly invoked a hypothetical blockade of the Strait of Hormuz with undersea mines, which would necessitate the deployment of the JMSDF minesweeping fleet. In July, the Japanese Prime Minister also said that he could envision JMSDF minesweeping operations in the South China Sea “if the situation meets the three conditions [on the use of force under collective self-defense].”  However, in September, a few days prior to the passing of the security bills, Abe tried to tone down his rhetoric on the subject saying that, given “the current international circumstances, we are not expecting that (minesweeping) will become a real issue,” although he emphasized that the JMSDF should regardless of the current political situation be ready for such an eventuality in the future.


Tuesday’s launching ceremony was attended by Vice Defense Minister Tetsuro Kuroe, JMSDF officers, Defense ministry officials and shipyard workers. “Awaji is scheduled to be commissioned in March 2017,” according to a Japanese Ministry of Defense official quoted by IHS Jane’s Navy International.  It remains unclear when the other vessels of the new class of JSMSDF minesweeping ships will enter service. By Franz-Stefan Gady for The Diplomat
Posted by Kerry B. Collison at 1:09 PM