The President is the ceremonial head in Nepal while the Prime Minister is the nation’s leader.


Bhandari (54) is the deputy leader of the party led by Prime Minister Khadga Prasad Oli, who was elected earlier this month and leads a coalition government. The new Constitution adopted last month required Nepal to name a new President. 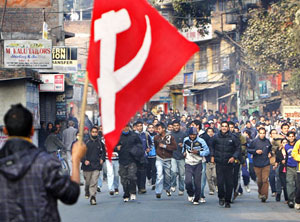 Bhandari is an active campaigner for women’s rights in Nepal and was among the politicians who campaigned for ensuring women’s rights in the new Constitution. The document says one-third of the members in parliament have to be women and either the President or Vice-President must be a woman.


The new President has been a leading political figure since her husband Madan Bhandari, who was then leader of the party, was killed in a still unsolved car accident in 1993.


She also led many demonstrations against the then King Gyanendra in 2006 that finally ended his authoritarian rule and restored democracy.


Bhandari is Nepal’s second President since the Himalayan nation was turned into a republic after abolishing the centuries-old monarchy.


The first President, Ram Baran Yadav, was elected in 2008 and was supposed to be in office for two years. But preparing and adopting the Constitution took seven years because of differences among political parties. Asia Times