Indonesia and Syria as Armageddon 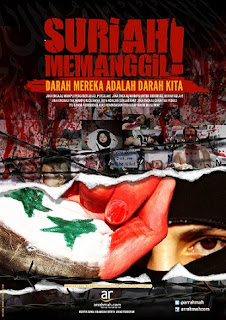 The death of Abu Muhammad Al-Indunisi in East Ghouta in November 2013 confirmed accounts that Indonesian jihadis were fighting in Syria. His ‘martyrdom’ was announced on Twitter by the Suqour Al Izz Brigade, one of Syria’s Islamist rebel militias.
But who was Abu Muhammad Al-Indunisi?
According to various jihadi media outlets, his real name was Riza Fardi. Originally from West Kalimantan, he had studied at the Al Mukmin Islamic boarding school (commonly known as Ngruki after the village where it is located), a Jemaah Islamiyah-affiliated school in Solo in Central Java where six of the Bali bombers studied. Along with this information, the radical website voa-islam.com noted that after graduating from Ngruki in 2006, Riza taught there for a year before going with other Ngruki alumni to study at the Al-Iman University in Yemen. When the Syria conflict erupted, he left Yemen to join the Suqour Al Izz Brigade. 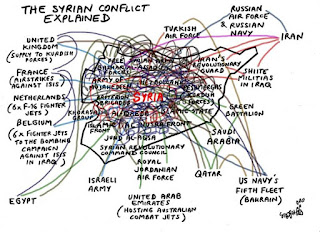 (Just to assist you appreciate what a mess Syria is in...!)

Riza Fardi is unlikely to be the only Indonesian to have fought in Syria. In October, the Indonesian embassy in Pakistan reported that four Indonesian students enrolled at the International Islamic University in Islamabad had ‘disappeared’ in August. The embassy traced them to Turkey and suspected that the four, all of whom were Ngruki alumni, had gone to wage jihad in Syria. In November, the head of the Indonesian Foreign Ministry’s directorate for the protection of citizens abroad, Tatang Budie Razak Utama, told the media he estimated there to be around 50 Indonesians fighting there.
Other Islamic groups in Indonesia are providing humanitarian assistance to the Syrian rebels. The most active is HASI, the Indonesian Red Crescent Society (which has no relation to the International Federation of Red Cross and Red Crescent Societies). HASI was formed by Jemaah Islamiyah activists and draws most of its leadership from among young jahidi intellectuals. It raises funds for Syria by organising large public meetings on the conflict and collecting money from attendees. HASI has organised more than 50 public gatherings in Indonesia in the last two years and sent at least eight teams to Syria over the same period. Although it is unclear how much money HASI has raised overall, one of its reports listed a donation of around $20,000 to build a hospital in Salma village in Latakia province, an area controlled by jihadi groups, including Ahrar al-Sham, the group that is the main contact of Indonesian jihadis; Suqour al Izz; and the Al Qaeda-affiliated Al Nusrah Front. The hospital was constructed to treat both the community and wounded jihadis.
Indonesian engagement doesn’t stop there. Abu Bakar Ba’asyir, the amir of Jema’ah Ansharut Tauhid and former Jemaah Islamiyah leader, also issued a fatwa (a non-binding legal ruling) stating that the jihad in Syria is a greater priority than the hajj or umroh pilgrimages. Jema’ah Ansharut Tauhid followed up on Ba’asyir’s fatwa by raising funds for Syria. In July 2013, their Nusa Tenggara branch collected more than $5000 over two days. It is not clear though whether Jema’ah Ansharut Tauhid has subsequently sent a team to Syria.
These various responses raise the question: why are Indonesia’s jihadis so enthusiastic about jihad in Syria? Their enthusiasm greatly exceeds their attention to the Afghanistan or Iraq wars. There was never any large-scale fundraising for Afghanistan or Iraq, nor any widespread appeals to depart for jihad in either country. The degree of jihadis' engagement with the Syria conflict is something new.

Indonesian jihadis consider the Syria conflict to be special because they believe it is linked to the Islamic equivalent of Armageddon, the final battle as judgment day approaches. Various hadith (sayings of the Prophet Muhammad) predict an apocalyptic war, with one hadith signalling that it will start in Syria. Many jihadis are convinced that the Mahdi, the Islamic messiah, will come to Syria, where he will battle and defeat Dajjal, the equivalent of the Anti-Christ, thereby opening the door to victory for the Islamic community worldwide. The importance of Syria to the final triumph of Islam, in the view of jihadis, means every Muslim must be involved because taking part in the jihad there is to join the defence of the Mahdi. Those who can’t go to Syria to wage war can participate by donating their resources to support the jihad.
At the same time, the war in Syria has perplexed some Indonesian jihadis because it puts them on the same side as the United States, especially when the Obama government was making plans – since shelved – to attack the Bashar Assad regime after its apparent use of chemical weapons. America, according to the jihadis, is allied with the Dajjal. An American attack on the Syrian regime would thus have amounted to the Dajjal’s forces working together with those of the Mahdi, an unimaginable prospect. The confusion among Indonesian radicals was only partially resolved when they found a hadith that said the Romans would help the Mahdi in the final battle. Jihadis interpreted ‘Romans’ to mean the United States and its allies.
Even before the Syrian conflict began, jihadis had started to believe that the end of the world was imminent. In 2005, some activists from the Majelis Mujahidin Indonesia – led by Abu Bakar Ba’asyir, until he left to form Jema’ah Ansharut Tauhid in 2008 – formed a welcoming committee for the Mahdi. Their beliefs arose from a hadith that states that Mahdi will descend immediately after both lunar and solar eclipses take place during the Islamic fasting month, something that happened in 2005. Although the Mahdi did not appear, the idea that the final battle was near remained popular among jihadis. One of the most prominent authors was the young Jemaah Islamiyah cleric, Abu Fatiah Al Adnani, a graduate of the Ngruki pesantren, who has authored more than a dozen books on this topic.

A source of credibility

Apart from messianic factors, the Syrian conflict has proven to be a way for groups like Jemaah Islamiyah and Jema’ah Ansharut Tauhid to regain their credibility within the jihadi community. Jemaah Islamiyah’s credibility in these circles was largely destroyed when it effectively renounced violence on Indonesian soil after anti-terror raids in Poso, Central Sulawesi in 2007, leading to the arrest of much of its senior leadership. Anger towards Jemaah Islamiyah was aired publicly in 2010, when the jihadi alliance behind a militant training camp in Aceh released a video explicitly attacking Jemaah Islamiyah for having abandoned jihad. In the video, one of the alliance leaders advised Jemaah Islamiyah members to join the struggle and not to be content with non-violent outreach, saying ‘Jihad is not waged with a pen, a sarong and a peci (Islamic cap). You’re able to gather hundreds of millions, even billions of rupiah, but you gather it for Islamic propagation and for boarding schools. This is treachery. If some go hungry, and there is money, give the money for jihad, let the hungry die.’ Now that Jemaah Islamiyah members are involved in the Syria jihad - via the humanitarian assistance being channeled through HASI - it is no longer in the firing line of other Indonesian jihadis. In fact, Jemaah Islamiyah’s credibility has risen dramatically, because it is now involved in what is seen by jihadis as one of the most important wars in the history of Islam.
Jema’ah Ansharut Tauhid also turned to religious propagation in the wake of the breakup of the Aceh training camp, which culminated in the arrest of senior figures, including Abu Bakar Ba’asyir. Many Jema’ah Ansharut Tauhid members, keen to wage jihad, were dissatisfied with the decision of its caretaker leader, Muchamad Achwan, to focus more on non-violent activities. The result was an exodus to other jihadi groups that were actively conducting terror attacks. The most recent instances were in late 2012 and early 2013, when several Jema’ah Ansharut Tauhid members in West and Central Java joined the Mujahidin Indonesia Barat group and subsequently took part in various robberies and attempted bombings.

Syria has created new divisions among Islamic groups but also reduced existing tensions among others. The clearest rift results from the refusal to join the Syria jihad by a group in Solo led by Muzakir a former comrade of Abu Bakar Ba’asyir. Muzakir and others, including Jose Rizal Jurnalis, head of the Medical Emergency Rescue Committee, believe the United States and its allies have tricked jihadis into fighting against the Assad regime, whereas Assad has traditionally been an opponent of the United States and Israel. Acting on these views, Muzakir met with Ba’asyir to ask for an end to the Syria jihad campaign. Other jihadis have denounced Muzakir, accusing him of being a Shi’a Muslim (Assad and those around him are Alawites, a variant of Shi’a Islam). These accusations have intensified because Muzakir has on several occasions refused to call Shi’a Muslims unbelievers.
Conversely, Syria has reduced tensions between jihadi and salafis, those who attempt to practise Islam in the manner of the first generations after the Prophet Muhammad. The two groups have frequently quarreled, owing to repeated accusations by salafis that the jihadis are ‘khawarij’, members of an Islamic sect considered deviant because of their extremism. For their part, jihadis accuse salafi groups of being ‘murji’ah’, another sect considered deviant because of their lax attitude to sins. Syria provided these groups with a common enemy, namely the Shi’a. Both groups have actively campaigned on Syria. denouncing the deviance of Shi’a Muslims. Both have raised funds and sent humanitarian assistance to Syria. Thanks to the Syria conflict, jihadis and salafis in Indonesia for the moment have ceased going after each other and are helping the same group in Syria, namely Ahrar Al-Sham, which was originally formed by Syrian salafis.

If the Syria conflict has eased jihadi-salafi hostility in Indonesia, it has increased tension there between jihadis and Shi’a Muslims, as jihadis always incorporate anti-Shi’a remarks into their campaigns on Syria, raising concerns that Indonesian Shi’a could become a target of terrorist attacks. Soon after the Syria conflict erupted in early 2011, Indonesian terrorists began to discuss possible plots against them. For instance in mid-2011, a terror group led by Abu Umar planned the assassination of Shi’a figures and attacks on Shi’a institutions, but members were arrested before plans got very far.

Apart from the risk of attacks on Shi’a, another risk in the future could be the return of Syrian war veterans to Indonesia. They will come back with military skills and a global network, creating the possibility they could perpetrate jihadi violence in Indonesia. This is a risk that needs to be taken seriously, especially with the precedent of Afghanistan veterans from the 1980s and 1990s returning to Indonesia and perpetrating various acts of terror.
Given these future dangers, the Indonesian government needs to respond to this enthusiasm for the jihad in Syria. Specifically, the government needs to take preventive measures to try and deter Indonesian citizens, including students at universities or other educational institutions in South Asia and the Middle East, from travelling to Syria to fight. Several Western countries have cancelled the passports of their citizens who have departed for Syria, and this may be a measure Indonesia can adopt. They should also step up monitoring of anti-Shi’a rhetoric on Indonesian jihadi websites and ensure that calls for violence do not translate into attacks on the Shi’a community.
If the Indonesian government doesn’t respond effectively, it could face more terrorism. The world may not end in Syria, as jihadis predict, but enthusiasm for the Syria conflict could sow the seeds for the next generation of jihadi violence in Indonesia.
Solahudin, is a researcher on jihadi movements in Indonesia. He is the author of The Roots of Terrorism in Indonesia (trans. Dave McRae), published by NewSouth Books in association with the Lowy Institute for International Policy, with international editions by NUS Press and Cornell University Press.
Posted by Kerry B. Collison at 3:26 PM