The return of the Marcos nightmare 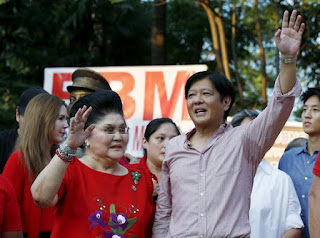 The dictator's son has stunned many by declaring his bid to become vice president. On September 23, the 43rd anniversary of the declaration of martial law in the Philippines by president Ferdinand Marcos, Filipinos were stunned to read on the front page of their newspapers that Senator Bongbong Marcos, the dictator's son, was running for vice president in the 2016 elections.

Alongside the stories was a photo of former first lady Imelda Marcos and former defence secretary Juan Ponce Enrile, who oversaw martial law, smiling on the campaign stage and gloating over their roles in the darkest hour of Philippine democracy.

The timing was deliberate.

The Marcos heirs' return to the political spotlight was a cynical display in their bid to revise history, rehabilitate their image and erase the tragic stain of martial rule from the Marcos regime.

To Filipinos who suffered the tribulations of dictatorship for 14 years, the imposition of martial law was a day of infamy. Yet the Marcos family and their cohorts chose to mark it with triumphalist spectacle.

Beyond the campaign stage, memories of the atrocities and abuses perpetrated by the military-backed regime flooded the press, bringing home the reality of life under martial law.

The Marcos family's display of contempt for democracy was exacerbated when they declared they were back on the centre stage of Philippine politics, completing the return from disgrace and exile in the wake of People Power Revolution that ousted them in 1986.

The triumphalism was, perhaps, warranted: the Marcos legacy remains intact and unstained by any punishment for the colossal corruption that pillaged the nation's wealth and for the killings and atrocities committed against thousands of regime opponents.

A dark - and false - history

In presenting Bongbong's bid for no less than the second-highest office in the land, the Marcos family swept under the carpet the sordid record of human rights abuses and judicial investigations into the looting and "crony capitalism" of the martial law regime.

The first fraud Marcos foisted on the Filipino people when he imposed martial law to launch his "New Society" was that he falsified history. The propaganda effort succeeded in deluding the Filipino people that martial law was proclaimed on September 21, 1972. This was indeed the date that Marcos signed the order, but the proclamation was deliberately made two days later, to give time for troops to shut down Congress and newspaper offices and arrest 200 targets - mostly opposition leaders and critical journalists.

In reality, a week before the declaration, information emerged that Marcos had already drawn up a plan to completely take over the government and gain absolute power. Senator Benigno Aquino Jr, in a speech on September 13, exposed what he called Oplan Sagittarius. He disclosed that he had received a top-secret plan by Marcos to place Metro Manila and outlying areas under control of the Philippine police as a prelude to martial law.

Marcos was going to use a series of bombings in Metro Manila, including the 1971 Plaza Miranda bombing, as justification for his takeover and subsequent authoritarian rule. In his diary, Marcos wrote on September 14, 1972, that he informed the military he would proceed with the proclamation of martial law. The US Embassy knew about Marcos' plans as early as September 17.

In his memoirs, then justice secretary Juan Ponce Enrile recalls that on an afternoon in December 1969, Marcos instructed him to study the presidential powers as commander in chief under the 1935 constitution. Marcos made the instruction as he "foresaw" the "escalation of violence and disorder in the country". He ordered that the "study must be done discreetly and confidentiality".

At about the same time, Marcos also instructed his executive secretary Alejandro Melchor and Brigadier-Gen Jose Almonte to study how military law was implemented elsewhere in the world. Marcos wanted to know the consequences of declaring martial law. The result of their study stated that "while martial law may accelerate development, in the end, the Philippines would become a political archipelago, with debilitating, factionalised politics".

Almonte recalls that the conclusion was that "the nation would be destroyed because, apart from the divisiveness it would cause, martial law would offer Marcos absolute power, which would corrupt absolutely".

By the end of January 1970, Enrile, with the help of Efren Plana and Minerva Gonzaga Reyes, submitted the only copy of the confidential report on the legal aspects and extent of martial law to Marcos. A week later, Marcos summoned Enrile and instructed him to prepare the documents for the implementation of martial law.

On May 8, 1972, Marcos wrote that he had instructed the military to update its plans, including the list of personalities to be arrested, and had met with Enrile to finalise the paperwork.

On August 1, 1972, Marcos met with a few of his most trusted military commanders to discuss tentative dates for the declaration of martial law - to fall within the next two months. The dates they considered either ended in 7 or were divisible by 7, which Marcos considered his lucky number.


Amando Doronila
The Philippine Daily Inquirer
Posted by Kerry B. Collison at 2:48 PM