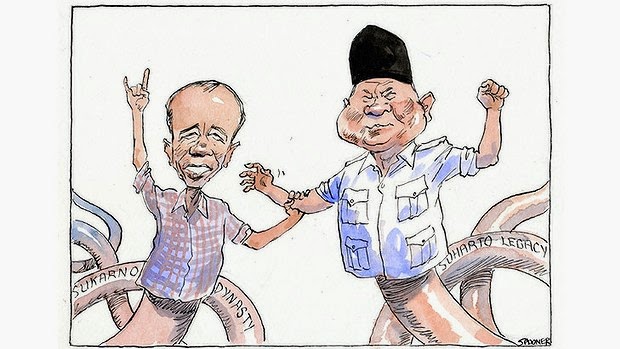 It may yet turn out to the advantage of Indonesia’s young democracy that its star ''outsider'' candidate has been forced to learn the lessons of old dynastic politics before the real demands of leadership begin.


It may not seem that way now, with the outcome of Wednesday's presidential election hanging on a knife  edge, but Joko Widodo (''Jokowi'') may soon have the chance to transcend the Sukarno family machine that was supposed to nurture him. 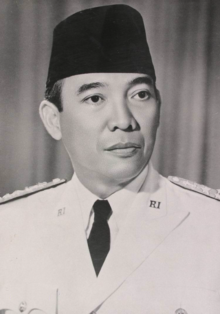 Until four months ago, when Megawati Sukarnoputri drafted Jokowi to front her Indonesian Democratic Party of Struggle (PDI-P) campaign, the former furniture salesman was seen to be so clean, effective and compelling that he would be unbeatable. Since then, the polls show Jokowi’s enormous lead has been eviscerated, as asphyxiating dynastic politics have set in.


The PDI-P is the political vehicle of Sukarno’s daughter Megawati Sukarnoputri, who drafted Jokowi to be her presidential candidate when it was obvious that her daughter would have no hope. Her daughter, Puan, remained in charge of the campaign team, where she ensured that her face, not his, was emblazoned across the nation’s billboards. 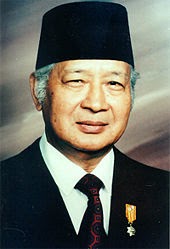 
Mother and daughter even enjoyed priority access to the party’s two campaign planes, leaving their star candidate to find his own way. Jokowi, who was denied the freedom to articulate policy, became an easy target for dynastic jokes.


''The puppet ... has no plan of his own, only the will of his master,'' said a poem, composed by one of his opponents.


Against this picture of wayang puppetry and weakness, it is no surprise that the well-known character flaws of Jokowi’s chief opponent, Prabowo Subianto, began to look like strengths.


Prabowo is well known as the powerful and controversial special forces commander who rose to three-star general under the patronage of his father-in-law, Suharto. His career of stirring military accomplishments and dark human rights violations, stretching from East Timor to Jakarta, ended shortly after Suharto’s fall in May, 1998. It should not have been difficult to highlight this feared leader’s unsuitability for office. Indeed, several of his former peers and superiors have tried.


Suharto’s last military commander, Wiranto, revealed that Prabowo had been sacked from his last military post because of his role in abducting 23 student activists (13 have never reappeared).


Now, in one of the most remarkable comebacks in the history of democracy anywhere, this maverick general stands a real chance of the enjoying the ultimate resurrection.


If Hendropriyono's psychological claims are remotely accurate, as some of the best-informed observers believe they are, then Indonesia’s muddle-through democracy could be about to hit some serious turbulence.


''Prabowo will be just as unpredictable in foreign policy as he is in domestic politics because of the instability in his personal and political character,'' says Marcus Mietzner, a leading authority on military and elite politics at the Australian National University.


"We know that he’s got a short fuse and that he’s frequently demonstrated a willingness to use foreign policy or any other issue for domestic political purposes,''  says Mietzner. "He will whip up sentiment against Australia, and Malaysia, if it suits him, at any time.''


If Prabowo wins, Indonesia’s brave new democracy may come under strain and the Abbott government’s most vexed international relationship could get much, much harder.


On the other hand, it may be that the country’s institutions are already well established and Prabowo might not deliver quite the wild ride that his legion of critics anticipate.


''People are painting him as a new Hitler, a psychopath, but I have my doubts about that,” says one close acquaintance, who has known him for 20 years. "I always found him well-informed and intelligent. He absorbed quite a lot of his economic thinking from his father, a very respected economist, and his brother-in-law. I can’t see that he’s going to be such an aberration. You might find Indonesia moving forward in ways that it needs to.''


Indonesia’s 190 million eligible voters have given Prabowo a real chance because the opponent they prefer, Jokowi, has presented as being incapable of breaking through the webs of elitism, corruption and inertia that are holding the nation back. His party’s powerbrokers, it seems, would rather risk defeat than upset the old and complex webs of patronage that comfort them in stable opposition.  The Sukarno family dynasty needs Jokowi’s popularity to survive but cannot afford to be outshone.


But if Jokowi wins, as a last-minute pick-up in the polls suggests he can, he would have earned the presidency by himself. He has a chance of avoiding the curse of political impotence that his Indian counterpart, Manmohan Singh, learnt only when it was too late. ''I have to come to terms with this,'' as Singh confided about his party’s political matriarch, Sonia Gandhi, according to a new book by his media adviser, The Accidental Prime Minister. ''There cannot be two centres of power. That creates confusion.''


If Jokowi wins, it will be despite the Sukarno family’s influence. He will have the power of being their saviour, rather than the other way around, giving him power to trust his instincts and assemble a credible team as he has done in the past when given the chance.


''If he still pulls off a victory, it will consolidate his image of  someone who has political magic,” says Mietzner.   "The architecture of power will change. A lot of people who had already tried to make deals with Prabowo will look pretty bad, Jokowi’s power will be immense, and it may well be that Megawati depends on his protection rather than the other way around.''