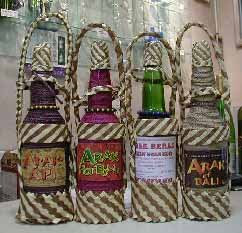 American, British, Irish and Dutch citizens whose families requested anonymity were among the people killed over the past two weeks.

Arak, which is made from fermented rice, palm sap and corn or other base ingredients, is a traditional drink for many Balinese and is used in religious ceremonies. However, it has become increasingly popular, especially amongst tourists, after an Indonesian Government crackdown on imported alcohol sent the price of wine and spirits soaring.

Arak-based cocktails are common in the many cheap bars frequented by tourists, while locals buy it in large quantities from roadside stalls and mix it with soft drinks to consume at home.
Posted by Kerry B. Collison at 2:50 PM