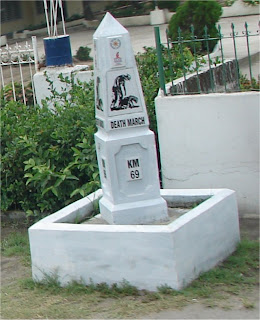 In 1942, Japanese captors marched about 78,000 prisoners of war—12,000 Americans and 66,000 Filipinos—for six days over the 104.6 kilometers (65 miles) from Bataan to Capas, Tarlac. The Capas National Shrine is built on the grounds surrounding Camp O’Donnell, where those who did not die during the forced march were held as prisoners in subhuman conditions.
The marchers were denied food, water and medical care—although along the route, Filipinos managed to slip some food and water to the marchers. Some of the American and Filipino soldiers were bayoneted or beheaded.
As many as 11,000 prisoners died, according to the US Air Force.
But up to now, historians and experts are still arguing about the actual number of deaths.
Well, at last the Japanese government, through its ambassador to the United States, has apologized for the Bataan Death March.
The apology was made in San Antonio, Texas, not in Washington, D.C., or New York or L.A.
But it happened last Saturday.
During WW II, 78,000 prisoners of war (12,000 Americans; 66,000 Filipinos) were marched by the Japanese 65 miles over six days to a prisoner-of-war camp. As many as 11,000 prisoners died on the march.
The ambassador’s six-minute speech appeased some of the surviving POWs, but not all. Several expressed concern over the atrocities of Japanese troops who, during the march, stabbed their captives with bayonets, slashed them across the throat or cut off their heads.

How about an apology to ‘comfort women’? 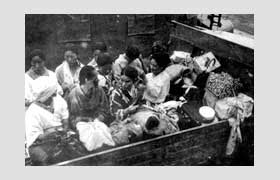 JAPAN'S abhorrent practice of enslaving women for sex for its troops in World War II has a little-known sequel: a similar system for occupying US GIs.

After its surrender, with tacit approval by US occupation authorities, Japan set up a similar "comfort women" system for the Americans.

Newly translated documents show US authorities permitted the official brothel system to operate despite internal reports that women were being coerced into prostitution.

The Americans by then had full knowledge of Japan's atrocious treatment of women across Asia. 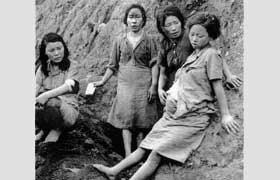 Tens of thousands were employed to provide sex to US troops until March 1946, when Gen Douglas MacArthur ended it.

The documents show that the brothels were rushed into operation as US forces poured into Japan from August 1945.
Posted by Kerry B. Collison at 3:57 PM