Political Apologies in East and West 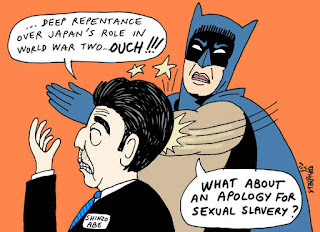 Japan's Prime Minister Shinzo Abe. (Reuters Photo/
Apologies are never easy. Negotiating and uttering a national apology about war-time activities is especially challenging and sensitive, charged with strategic implications. And thanks to the profusion of digital media, questionable actions of the past are ever present in public view, crying out for justice and apology.


As apologies come they also invite comparison, and two recent high-profile apologies highlight differences between East and West: On the cusp of the New Year, Japan’s hawkish Prime Minister Shinzo Abe issued a surprising, yet highly specific apology for  sex slavery in Korea before and during World War II. Earlier in October, during a television interview, former British Prime Minister Tony Blair offered a less official and partial apology, not for the Iraq war, but for relying on misleading information before the 2003 invasion and misunderstanding the consequences of regime change.


Political calculation was seen as a factor in both cases – Abe sensing the benefits of closer ties with South Korea at a time of strategic peril, timely given Pyongyang’s nuclear test just days later, and the former British prime minister hoping that saying sorry might help him avoid legal difficulty ahead of publication of the Chilcot inquiry into the Iraq War.


But there was a key difference in how the gestures were received by their target audiences: Few in Asia bothered to ask whether Abe, the man, really “meant it” when he apologized over Japan forcing Korean women into wartime brothels, and Tokyo also pledged $8.3 million in official funds for surviving victims. Whereas in Britain, the question of how much Blair personally felt regret over Iraq was central to the apology’s reception. Blair’s perceived insincerity – many called his words mere “spin” – may have rendered the gesture meaningless. By contrast, if asked about Abe’s personal feelings in offering owabi, among Japan’s strongest words for apology, to South Korean President Park Geun-hye, many Asians might be tempted to respond that, of course, the hard-line nationalist didn’t mean it.


Yet such a response doesn’t make his gesture less significant. The formal, and not the personal, nature of the event is paramount here. Taiwan and the Philippines offered cautious welcome, and China’s reaction was “wait-and-see,” as opposed to outright rejection, which could be seen as a sign of progress. Most importantly, the apology yielded immediate impact – Abe and Park picked up the phone after the Jan. 6 North Korean nuclear test, pledging to work together over the threat.


When a Japanese prime minister apologizes over World War II, the gesture is ritualized and choreographed. It doesn’t matter whether the leader is a good one or bad, believer or heretic, but, just that he is officially qualified to carry out the task. Abe is the symbolic lightning rod for collective contrition and also, critically, collective shame. This is why apologies are both easier in Japan, and harder. Wartime apologies, according to blood laws, cast shame upon the entire “house” – in fact, the word “owabi” contains the ideogram for “household.” And for Abe’s apology, house or family means country. The crucial point: Japanese acceptance of shame is cast not so much upon oneself or one’s generation, but upon ancestors who were active participants in the war. And for many Japanese, especially older ones, such shame is unacceptable. The Japanese traditionally revere their ancestors, and a butsudan, a family Buddhist altar where incense is lit in prayer for departed loved ones, is still a common feature for Japanese homes.


In both East and West, apologizing is a means of bringing the offender back into the social fold. But in his book "Mea Culpa," sociologist Nicholas Tavuchis helps illuminate a key difference: “It is only by personally acknowledging ultimate responsibility, expressing genuine sorrow and regret, and pledging henceforth (implicitly or explicitly) to abide by the rules, that the offender simultaneously recalls and is re-called to that which binds.” This Western emphasis on the personal nature of apology has far less hold in Eastern cultures.


A Jan. 10 interview for Abe with Japanese national broadcaster NHK was deeply revealing in this respect. When asked about the “significance” of his apology, the Japanese leader cited neither closer ties with South Korea nor the obvious matter of seeking to heal the pain of former sex slaves. The significance, he said, lay in the fact that the two sides agreed the apology to be “final and irrevocable.” That is, Tokyo would never have to apologize again. Abe’s apology was a matter of official business, a concession in a settling of scores, with no particular relevance to his personal vantage point. And oddly enough, for Korea, the success in wresting these words of apology from a conservative hawk may carry greater significance than receiving them from a liberal dove; the apology itself becomes the extraction of a price. Many Japanese could not help but wonder, as one person asked in watching the news, did Abe win or lose?


Abe’s own attitudes toward the war are intimately tied to his own family history. His grandfather, former Prime Minister Nobusuke Kishi, was charged with Class A war crimes although not convicted. This paradoxically means that, while Abe may not “mean it” when he apologized over comfort women, it’s entirely possible that the words were just as costly, perhaps more so, since there was no catharsis of the sort accompanying sincere regret.


It’s not only in the political domain, but also the personal, that one can find differences between East and West in perceptions of apology. In the West, when one half of a couple feels aggrieved, an apology is obviously useful to setting affairs right. It’s usually part of the process of reconciliation, largely taken care of by time, with resentment continuing to fester until the original offense is forgotten. The apology, or lack of it, is then part of the equation of how long ill feelings last. In Japan, by contrast, and while the process may vary depending on individuals and circumstances, the apology is itself often the key objective. Ayamare! Apologize! – an aggrieved party may demand of a perceived offender. The relationship can remain frozen for an extraordinarily long time over a strikingly trivial matter, until one proffers the magic word: Gomenasai! I’m sorry!


Suddenly, the cloud is lifted, and all is well again. One word, and life returns to normal. It is the act perhaps more than the perceived sincerity that matters.


Japan famously makes a distinction between tatemae, façade, and honne, true feeling. Blair’s apology – which when parsed becomes more of an apologia in the Socratic sense, that is, a justification – reveals that the concept is not unique to Japan. One goes about life in the West navigating the same conundrum of needing to disguise the truth for the sake of social acceptability, or in Blair’s case, political expediency.


In the West, there is an unresolved tension between knowing that everybody lies and expecting everybody to tell the truth. In Asia, there is a little more realism in how people take the dynamics of tatemae and honne for granted.


Deep down, the two politicians may well be poles apart in their personal perceptions of Japan’s responsibility over so-called “comfort women.” But each displayed genuine human feeling in the hope of building a better future together – the key goal in political apologies.


Joji Sakurai is a journalist and essayist based in Piran, Slovenia. His work has appeared in the Financial Times, New Statesman, npr.org, Oxford Today, the International New York Times and other publications.