Credit Running Out for the ‘Orang Outang’ 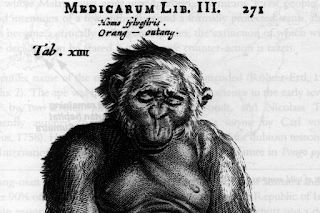 First orangutan described in Western science, caught in the district of Angkola in Tapanuli, North Sumatra, and described by the Dutch physician Nicolaas Tulp in 1641. (Image courtesy of Eri
In old Dutch books the orangutan was often referred to as the Orang-Outang, or person with a debt, i.e., a debtor. I can’t think of a single reason why colonial-era writers would consider orangutans as owing anything to anyone — orangutans neither had credit cards nor did they take out loans for business investments. Presumably “outang,” debt, was an honest misspelling of “hutan,” or forest.


There is more to this debt issue though. In fact, it seems to me that it is not the orangutan that has a debt to us, but it is us who owe the orangutan. Or even more, we owe something to ourselves.


As we speak, the Bornean orangutan is being declared Critically Endangered by the International Union for Conservation of Nature (IUCN). Basically that means that we expect it to go extinct in the wild in the near future unless something radical is done to prevent that. There is only one species who can do that radical thing, and that is us, Homo sapiens.


But why should we prevent the extinction of the orangutan, or any other threatened species for that matter? Why bother?


Often people use the argument that orangutans are our close evolutionary relatives, sharing 98 percent of our genes. It’s an interesting idea but also slightly irrelevant considering that flatworms share 50 percent of our genes, and there are very few societies for the preservation of flatworms.


Furthermore, in deeply religious societies like Indonesia and Malaysia, there may not be that many who would willingly accept that orangutans and humans share the same evolutionary ancestor. Surely there have to be better reasons to prevent orangutans from going extinct.


People will tell you that orangutans are highly intelligent and show deep emotions, which is why we have to take care of them. Orangutans also eat fruits and poop seeds that maintain the diversity of the forest — without orangutans the forest would be so much less, aaah, forest-like. And, yes, orangutans are also legally protected; the law says they cannot be killed, so they need to be protected.


There are even financial reasons. I don’t know the value of orangutans, but to give another example, the near-extinction of vultures in India was estimated to have caused $34 billion in health costs. Vulture numbers crashed by more than 99.9 percent in some places. The reason for their decline starts with a veterinary drug called diclofenac, an anti-inflammatory drug routinely given to holy cows with stiff shoulders. Vultures feeding on cow carcasses don’t take well to the drug and die. Untouched carcasses attract vermin, ultimately leading to large disease outbreaks and major financial costs.


And although we don’t know yet the full costs of orangutans going extinct, we do see the impacts when we mess up their house. Places like Borneo and Sumatra incur massive societal and economic costs resulting from badly planned deforestation. That includes the costs of flooding, temperature increases, disease outbreaks, and disappearance of freshwater fish, to name a few. The politicians in Jakarta and Kuala Lumpur do not really know or count the costs, but that doesn’t mean these costs don’t exist.


So, if we fail to protect the forests that orangutans need to survive, we will ultimately undermine the fundamental living conditions for ourselves. And that is not scaremongering, it is real. Because, after all, it is obvious that we are not doing particularly well looking after our own house. The climate is all out of kilter. There are holes in the ozone layer. There is suffocating air pollution in Beijng, Delhi and anywhere downwind from Indonesia. And don’t even think of drinking from a river. We can just about live in that mess, but for how much longer? And more importantly, why would we choose to?


So, in the end, the most convincing argument to me for conserving the orangutan and its forest habitat is that if we can look after the orangutan’s house and stop killing them, it means we can also look responsibly after ourselves.


The extinction risk of Homo sapiens by the way has also been assessed by the IUCN. So far we are considered to be of Least Concern. Now let’s make sure that Least Concern does not mean unconcerned. Because to be unconcerned about the world we are living in and the other creatures we share it with, would be real dumb.