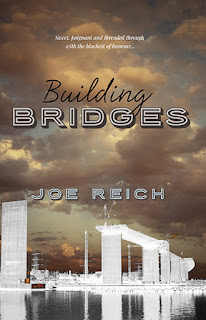 
Melbourne, 1970. Arnold is a first year resident at the Royal. It is a year of bridging: from medical student to doctor, child to adult, from mindless obedience to independent thought.

Working endless hours in a hospital that seems to value tradition over competence, Arnold and his fellow residents comically bumble along. The only constant are his nightmares: a phobia of police.

Despite his fears, it is Arnold who breathlessly calls the police to say he witnessed Petr stab Greg outside the hospital. Greg is a fellow resident doctor and Arnold’s closest friend while Petr is a recently arrived immigrant working on the construction of the Westgate Bridge. So what brings these two seemingly unconnected men together in such a dramatic way?

In this dark yet comic tale of coming of age we meet those born in the aftermath of the Holocaust, self-absorbed and ignorant of the shadow it casts over their lives.

There are many bridges to be crossed that year. But not all of them will remain standing.


Joe Reich is a practising ophthalmologist in Melbourne. Most of his writing has been in the field of medical education, lightened by comedy debates. Other interests include painting in acrylics and watercolours.
In 2009 he was shortlisted for the Women’s Weekly Short Story Competition. His first novel, I Know Precious Little, published in 2011, was described by the Sydney Morning Herald as a ‘darkly comic novel full of social and psychological insight.’
Also by Joe Reich
I Know Precious Little 2011
Book of the Weak 2013
Posted by Kerry B. Collison at 1:35 PM