Multicultural peace - at what cost? Anyone who pretends you can introduce hundreds of thousands of empty-handed newcomers into an affluent country without incident either has rocks in their head 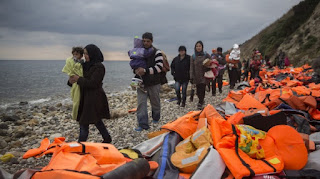 Multicultural peace - at what cost? Anyone who pretends you can introduce hundreds of thousands of empty-handed newcomers into an affluent country without incident either has rocks in their head


How easily the immigration debate lends itself to extremes. Photo: AP


And Britain devoted the past week to argument about an immigration ban on just one man: Donald Trump.


The formal legislative debate occupied Westminster for three hours on Wednesday, despite several serious – some would say terminal – snags with the plan, including the lack of any parliamentary authority to ban the ginger miscreant in question, the concurrent lack of any express intention evinced by the target to travel personally to Britain in the immediate future, and the fact that (unlike, one imagines, many putative immigrants) he already owns $1.5 billion worth of golf courses there.


Nevertheless! A robust and proper democracy is never deterred by anything so trivial as the complete unworkability of the legislative proposition at hand (See: The Australian Parliament and about the last five federal Budgets.)


And the proposition was not entirely without merit. For instance, Stopping The Trump is massively easier than Stopping The Syrians. There's only one of him. He's pretty easy to spot. And there's no real moral quandary involved, given that he's not fleeing persecution, unless you count MSNBC.


How easily the immigration debate lends itself to extremes. It acts like an ideological centrifuge, driving participants either to radical nationalism or radical compassionism, the most entrenched proponents of either approach developing – over time - spookily similar hints of demagoguery.


On the one hand, let's take Trump himself. He advocates building a large wall, at Mexican expense, to deter Mexicans from coming to America. This is a pleasing arrangement for Trump because it appeals not only to the Mexican-fearing part of his constituency, but also the part which worries that America is spending too much already on masonry.


He also advocates a travel ban on Muslims – whether tourists, business visitors, migrants or refugees – entering the United States.


Voters despise self-interestedness in their political leaders, so it is just conceivable that the whiff of economic hara-kiri in the Trump proposal (he has large business interests in Dubai, Azerbaijan, Turkey and Indonesia, raising the distinct possibility that the Trump travel bans would afflict his own employees and business partners) might play to his advantage.


But otherwise, of course, it is weapons-grade craziness.


Watching the Republican primary at the moment is like watching a kid build a rocket.


Every day, the kid bolts on some unfeasible new attachment (last week's was Sarah Palin) and onlookers aren't sure how to react. Surely the rocket will never actually get to the moon. But the kid's polling 37 per cent in Iowa, so no Republican can afford to call him an idiot just yet. This is why Republicans get a kind of fixed, Stepford-wife grin when asked about Trump.


And no Democrat would be stupid enough to stop him from building the greatest pile of junk ever conceived in the history of American democracy, which is saying something.


The problem, in the meantime, is that this kind of extremism is catching.


It's the kind of hyper-aggressive daffiness you'd expect from the man himself.


It's a harmless spot of fun, though, compared to the sinister murk of what happened in Cologne and other cities on New Year's Eve, when sexual assaults on women by men of Middle Eastern or North African appearance were under-reported or not reported at all, seemingly due to concern about inflaming community tensions around Muslim refugees.


Maintaining peaceable and hospitable communities is – of course – an admirable objective.


But to ignore or downplay criminality in the interests of maintaining multicultural peace is a grotesque piece of extremism every bit as damaging as the racist commentary the behaviour seeks to avoid.


Why? Because in seeking to defray community attitudes of fear and suspicion, it instead confirms them. Where a dozen offences have been covered up, or even a hundred, the fertile human imagination is wont to conjure many more.


Mass immigration is a big deal. And anyone who pretends you can introduce hundreds of thousands of empty-handed newcomers into an affluent country without incident either has rocks in their head, or does not live in the areas to which such newcomers are introduced in any significant number.


Australia is a good international demonstration of how well mass immigration can pan out over time.


To remain silent – even in the interests of some kind of compassion - is to do no-one a kindness.


Annabel Crabb is an ABC writer and broadcaster.