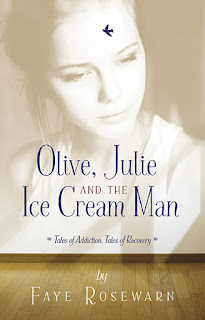 Olive , the main character in this book is raised with in the bounds of a perfectionist family, where all things need to be of high standards and correct.At early age she develops extreme low self esteem , becoming a people pleaser. This leads in to abuse, domestic violence of a verbal nature, and disempowerment. Her extended marriage consists of alcoholism verbal condemnation and manipulation. After a forty year marriage she manages to develop courage enough to leave to recover her true identity Her journey is one that is sad yet empowering and a stark reminder of what often exists in society.

The stories following Olive are interviews with people working in the area of drug and alcohol addiction, others are of those that are addicted, and a varied collection of situations pertaining to disempowerment in association with the use of drugs and alcohol.

Faye Rosewarn has a desire and passion to prevent people from suffering from an alcohol or substance addiction , which is the reason behind her writing her stories. She aims to provide education to those who may be starting to dabble in substances or who have starting using, to the dangers of where drugs and alcohol abuse can affect a person s life, not only for the user , but for their families and friends. I am sure that if you read her book with an open mind, you will be somewhat enlightened to the insidiousness of this huge problem.


—Lisa Spencer, psychologist, 18 years of working with people in recovery.

The subject is very well researched by the author, resulting in descriptive true to life stories outlining the consequences of alcohol and drug abuse over a broad spectrum of individuals. The reader will be provoked into identifying how close their own life experiences may have come to those described and the resulting dire consequences.


In so many ways, I, as the author, am similar to the character of Olive. I have been the receiver of much criticism throughout my life. A child’s perception of continual demands for the required perfect standards of an adult were, for me, both difficult and painful to comprehend.


My husband died in the year 2014. We were partners in life for forty years. His death was one of pain due to those long years of alcoholism. The three months spent in hospital prior to his death were days of delusional thinking, lack of awareness and incoherent interactions. Being a witness to a slow death and knowing that it was, in many ways, self-inflicted and perhaps may have been avoided, puts a strain on families as it did on me, and communication does not exist.


He was not a physically violent person, but violence comes from speaking and can be equally as detrimental to a person’s self-confidence as physical beatings. Continued criticism may be a form of violence as it slowly reduced a person’s ability to conduct a life of self-worth.


Much of this occurred in my life. On my sixtieth birthday, after forty years, I developed some much needed courage, decided to jump out of a plane, and then in a short period of time following this event, I told my husband that I must leave him. It was painful. Many people failed to understand my reasons. Often alcoholics are great at deceiving others and people wondered why. His presentation to people was one of being carefree and attentive to his family.


I spent eight years in a small country village to mend the damages that life had dealt, returning to the coast and my much-loved sons and grandchildren.


I now live happily alone in a village for the over-fifties in a small, plastic house, with flowers out the front. My happiness is complete.