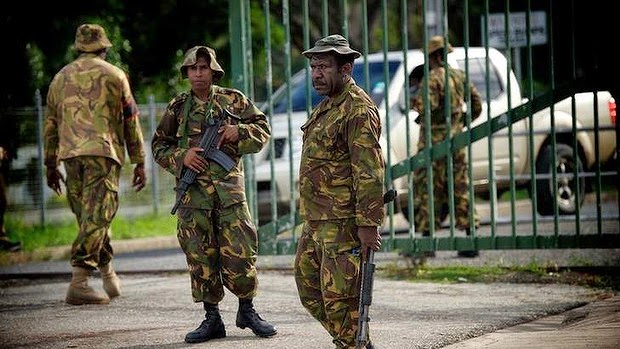 A border patrol of Papua New Guinea soldiers came under fire from Indonesian troops a few weeks back – and not for the first time. No one was injured, and the PNG soldiers did not shoot back. But this jungle skirmish followed an earlier PNG complaint in April about trigger-happy Indonesians hunting for rebels who cross from neighbouring provinces of West Papua.


Alarm bells ought to be sounding in Australia. Here was an ugly episode that could easily have turned into something far worse. PNG has plenty of problems, and tension with Indonesia is just one. Australians should pay more attention to what’s going on up north, not least to understand that foisting an asylum seeker camp on Manus Island has created extra pressure in an already-fragile country.


Far from the border with Indonesia, PNG has its own separatist trouble. Passions on the resource-rich islands of Bougainville are threatening to flare. Close observers believe the central government in Port Moresby is simply in denial about the likelihood Bougainville will vote to cut ties with PNG in the next few years.


No one is talking about a return to armed rebellion. At least, not yet. But the window for independence is about to open and the shock of a breakaway province could lead to rash decisions and unforeseen consequences. 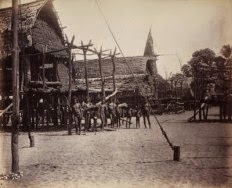 
It all comes back to the details of a peace deal in 2001 that officially ended what is seen as the bloodiest Pacific conflict since World War II. Fighting in Bougainville in the 1990s cost perhaps as many 20,000 lives, although the exact toll is not known and is probably lower. Suffice to say, the fighting was vicious, drawn out, and devastated the local population.


It started with local anger about Bougainville’s huge copper mine, Panguna. Then run by Australian company Rio Tinto, locals complained about the environmental burden and that the riches were not fairly shared. At the time, Panguna singularly comprised the biggest slice of the PNG economy outside Australian aid donations, so when rebels shut down mining and demanded independence, the fight was bitter.


The eventual peace accord created special autonomy for Bougainville and involved a commitment to rid the islands of weapons. The deal also required a referendum, to be held sometime in the five years after 2015, for the people of Bougainville to decide whether to remain part of PNG or go it alone.


That independence ballot, once a distant dream, is now a dawning reality. 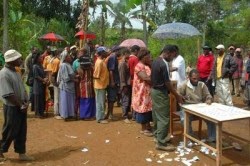 The sting in the peace deal was the referendum result must also be ratified by the PNG Parliament. The Australian government will be in an awkward bind should the people of Bougainville vote clearly for independence, and yet the politicians in Port Moresby present an upraised middle finger in return.


A report from the Australian Strategic Policy Institute in November warned such an outcome would be ‘‘destabilising’’. I’d go with disastrous.


Foreign Minister Julie Bishop went to Bougainville in opposition and is alert to the problem. But the challenge for Australia is how to get the PNG government more engaged in its restive province before the ballot is held and not ignorantly stumble into a crisis. Canberra’s influence has never been as strong as often assumed, but the need to keep Port Moresby onside with asylum seeker processing on Manus Islands has reduced Australia’s leverage even more.


The independence ballot does not yet have a date. In Bougainville, some would like the vote to be in June next year - the first date available under the terms of the peace deal. In Port Moresby, the few that even think about Bougainville would prefer as late as possible, in 2020.


Or perhaps not at all. The peace deal also stipulates the disposal of weapons, and some in Bougainville are still hesitant. A former rebel fighter was quoted last month, arguing the guns should be retained for posterity.


“Our land would have [been] for the PNG government and people if we did not take weapons and chase them out,” Chris Bitunau has said. “We cannot throw away our Bougainville history; the future generations have to see and feel these guns, they have to know the owners of these guns in pictures and in stories.”


It seems the two sides are on a collision course. The mood of PNG’s government is not one of compromise. The country is awash with cash - last week the first shipments of liquefied natural gas from a $US19 billion project left for Japan. The Panguna mine doesn’t stand alone any more as a source of income. And Prime Minister


Peter O’Neill has bragged the refugee deal he signed with Kevin Rudd gave PNG greater control over Australia’s aid, too.


But it would be dangerous to assume PNG would be willing to let Bougainville go without reconciling to the prospect long before. Should tempers erupt again, there is no guarantee the soldiers won’t shoot back.


Photo: Jason South
Posted by Kerry B. Collison at 4:03 PM