Every year, large populations must deal with hazardous flooding, and the problem is getting worse.


Indonesia’s predictable, but hazardous, annual floods inundate the city every rainy season from December to February, engulfing tens of kilometers of residential city areas with up to four meters of sewage-infused floodwater for days, according to the UN Office for the Coordination of Humanitarian Affairs (OCHA) in Indonesia.


“We feel stressed when we have to keep evacuating our houses. Our children cannot go to school, and we do not work during this time,” said Saripudin, 40, a resident of North Kedoya, a riverside community of 7,000 that sits next to the Palanggrahan River. 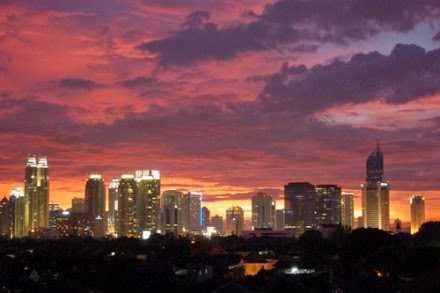 Between December and February each year, North Kedoyan residents are accustomed to living with bechek, the Indonesian word for “puddles” – pools of water ranging from 30 cm to one meter of water inside their homes. But since 2012, the flood water levels in Jakarta have been increasing, according to community members and the Palang Merah Indonesia (PMI), the local Red Cross. In January 2014 alone, some neighborhoods were evacuated nine times to escape water between two to four meters inside their homes. Despite recent attempts by the government  to encourage residents to relocate to less flood-prone land, the majority prefer to stay and continue to cope with floods.


“The issue is not why do they live there, but how to save them in times of flooding,” said Ahmad Hussein, the spokesperson for the International Federation of the Red Cross (IFRC) in Indonesia.


While communities have developed creative coping mechanisms to deal with incoming deluges, such as keeping chickens and other valuables on the heightened railroad tracks running parallel to the village, humanitarians and hydrological experts point to the perennial health concerns and safety hazards of living in flood plains beside rivers. But with the majority poor of Jakarta dwelling beside rivers and working in informal labor, easy access to the city center is necessary for economic survival, and the riverbanks have become their home.


Flood water mixing with garbage piles in the cramped residential areas can spur disease, including skin infections and diarrhea, especially in children under the age of 5, according to the IFRC.


“Leptospirosis from rats also spreads more easily with floods as the bacteria goes into the water,” said Husein, warning of outbreaks of the fatal animal-borne disease that can result in high fever, internal bleeding and organ failure.


While PMI has trained the community in cleaning the houses after the floods recede using antibacterial sprays, sanitation – an ongoing problem in Jakarta’s poorer areas – continues to challenge the flood-prone households, according to Husein.


“The water is black when the floods come in,” said Saripudin, explaining that the dirty liquid generally takes one to two weeks to subside, leaving their houses stained and foul-smelling, and added that “most of us do not even know how to swim.”


Meanwhile flood precautions, such as keeping electrical appliances on high shelves and storing household goods, such as roosters and bicycles, on top of the nearby railroad tracks (which are elevated by roughly five feet), have become second nature to the north Keboyan residents. Sofas are propped on three feet high cinder blocks to accommodate bechek.


“People are so used to the floods that usually they refuse to leave until the water level is very high [more than two meters inside their houses], and then they are yelling to leave,” said Bu Marbun, a veteran PMI volunteer who has helped Keboyan residents to evacuate onto rubber boats to ad hoc evacuation centers— made from schools and mosques— for the past eight years.


But such adaptive measures, while effective to protect household assets, reduce the day-to-day urgency of much-needed structural measures to address the root causes of the water surges, such as building channels for water flow and re-designing peoples’ homes to allow them to continue to live there while reducing risks to their health and homes.


“This is particularly challenging in mega-cities like Jakarta because of the numbers of people involved. The challenge is how to create housing designs that allow for water flow, and to do it well. It takes a long term high level of investment,” said Marcus Moench, the president of the Institute of Social and Environmental Transition (ISET-International), a global research institution providing technical advice on climate change adaptation to Indonesia and other Asian countries with high rates of urban growth, such as India and Vietnam.


Raised embankments, such as the heightened train tracks five feet above ground level, trap dirty water in the neighborhood, while garbage blocks existing drainage canals. “Urban garbage is as much a cause of flooding as rainfall and floods themselves,” said Moench.


A Problem of Drainage


While regular flooding is partly due to northern Jakarta’s low lying areas, which sit below sea level, the rapid pace of urbanization and overcrowding provoke flood waters to stagnate and rise instead of receding.


“It is a central dilemma in urban areas. If you want space for floods to come in, you need open space that can be inundated quickly,” said Moench.


Ideally wetlands with floodways would permit the water to stream out— but this is impossible with the dense housing structures that clutter North Keboya, according to ISET-International and OCHA.


The building structures and paved ground do not allow water to be absorbed, while garbage from communities clogs the rivers and drainage canals. To accommodate the annual three-month rainy season, peoples’ houses to either be redesigned, or they need to move, say hydrological experts.


“It is a very sensitive part of urban development,” said Titi Moektijasih, a humanitarian affairs analyst with OCHA.


Since 2013, municipal authorities have been encouraging households in flood-prone areas, such as North Kedoya, to relocate to low-cost government housing further inland. Roughly one hundred people from the northern and western areas of the city have already departed their swampy homes, but the majority staunchly refuse.


“This is our home. If we move from here, we will have to pay rent somewhere. We cannot afford it so we will make do how to live with floods,” said Saripudin, whose family has lived in Keboya for generations.


Most North Keboyans works in low-skilled and informal labor such as selling cooked meatballs from portable street food stalls, or as motorbike taxi drivers and vegetable vendors in any of the city’s countless wet markets.


“There are strong livelihood reasons why people continue to settle and live in these places,” said Moench.


Low income communities tend to live in marginal areas, such as along riverbanks, because land is available and cheap (or free) while still central – with easy access to areas of employment, such as markets. “They wouldn’t have such easy access to employment in a more outlying, less exposed spot,” added Moench.


“The majority of the poor in Jakarta live along the river,” said Knarik Kampala, the deputy director of OCHA based in Jakarta, explaining that ongoing measures to improve drainage as well as initiatives to improve garbage management and sanitation in the communities would help. “They are the first to be affected by heavy rains, and the slums can be dangerous when it floods,” she stressed.


“They deal with it because they have to. No one likes sewage in their house,” said Moench.


Dana Maclean is a journalist covering Southeast Asia. The Diplomat