Life and death from the high Himalayas to Asia's factory floors 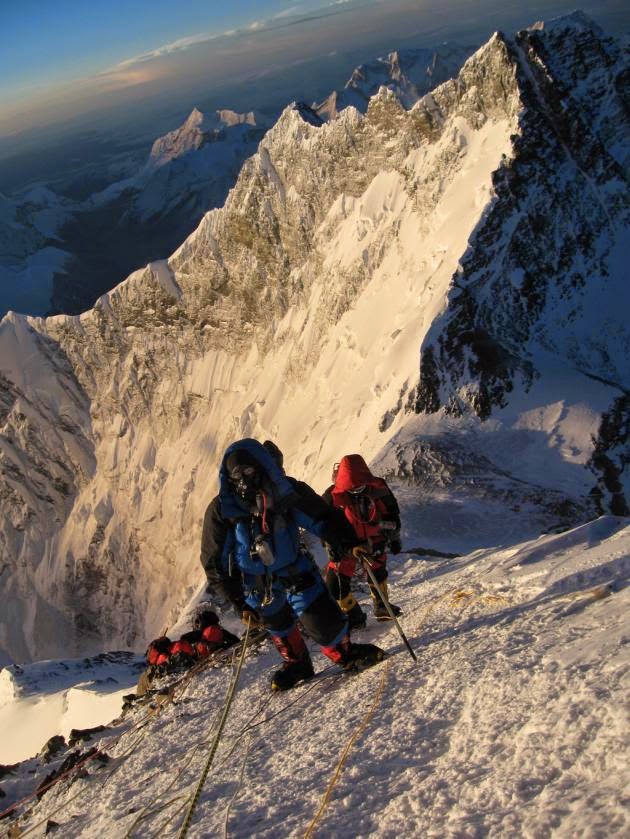 Everest tragedy highlights need for changes in the labour chain


We did it together," should have been the mantra high on Everest in 1953, when Tenzing Norgay Sherpa and Edmund Hillary became the first to summit the world's highest peak. But that was far from the case this year when an avalanche on the mountain killed 16, underscoring as never before the divide between well-heeled clients and the Sherpas who do much of the most difficult and dangerous work that is vital to the business of mountaineering in Nepal.

Isn't climbing supposed to be one of "the" symbols of comradeship and teamwork? During the time Tenzing - who would have been 100 years old today - and Hillary climbed Everest, everyone was involved and shared the risk, the challenges and the joys of adventure. As the world moves on to read of the next tragedy from Asia, the loss of lives on Everest this April 18 at the start of the climbing season is for many likely to be yesterday's news.

For many though, our deep sense of sadness remains, only made worse by the tales of family and friends whom we have grown up or worked with in the Himalayan region.

The grief and suffering of loved ones left behind - parents, spouses and in particular children - are no doubt echoed by families elsewhere here in Asia during a season of tragedies, whether the sinking of a Korean ferry or a Malaysia airliner gone missing. They also bring to mind the tragedy of a year ago in Dhaka when the multistorey Rana Plaza garment factory collapsed, killing more than 1,100 people.

The raw numbers of people who died high in the snows of Everest are much lower than those who died in Dhaka. Still, the calls for sweeping change that are emerging are as powerful, and we fear will also be soon forgotten. In Nepal, amid small tightly knit mountain communities, the sentiment is clear. We lost "just" 16 people, but entire communities are devastated, and things must change.

In the wake of this disaster - the worst in the history of climbing on Everest - we are left wondering what kind of "adventure" has the pursuit of reaching the planet's highest summit become? Everest is obviously an extremely dangerous and challenging environment for all. Yet, only Sherpas died this time, and over the years, members of the Sherpa ethnic minority account for the majority of Everest fatalities.

The deaths of so many Sherpas this spring highlights what has gone wrong among many of those pursuing Everest these days - a breakdown of climbing values and to some extent, human values. The deaths high in the Himalaya also underscore the growing divide between expedition members paying top dollar to summit Everest and the Sherpas - mountaineering guides who have won the respect of moutaineers everywhere but certainly not the riches nor the opportunities taken for granted by all too many expedition members.

This year's tragedy also has brought new attention to not just mismatches in compensation and core benefits such as insurance, but also shortcomings in team work, responsibility and leadership. There is also the sad reality that despite hundreds of millions of dollars in development assistance, Nepal's mountain communities in particular remain desperately poor.

One year ago, a collapsing building in Dhaka brought new attention to the exploitation of Bangladesh's garment workers. Somehow along the way, the Sherpa climbers, the deciding factor for almost any successful expedition, have also become among the most exploited.

We still hope against odds that this disaster brings about some urgently needed changes and immediate actions:

First, shifts in behaviour. For change to take place, everyone involved with Everest must embrace new responsibilities. The Sherpa climbers themselves must re-organise, re-articulate their concerns and establish a sensible "code of operation" - a code that is written by them, on their own terms. Then they must stand firmly united behind it.

For members of foreign expeditions and their leaders, they must lead from the front, not from behind. Their argument that their responsibility is in "providing jobs" is insufficient - a morally wrong, if not immoral, cover. Sherpas play a pivotal role in helping international climbers achieve their goals, operating in treacherous conditions and enduring disproportionate exposure to the dangers of Everest.

For sponsors of expeditions, their responsibilities do not stop with writing a check. That should only be the starting point. They must play a more active role in evaluating how their funds are utilised and investigate the human cost involved in furthering their brand value. Much as the Rana Plaza tragedy underscored that responsibility extends across an entire supply chain, so too does this tragedy underscore that in services, as in manufacturing, there is no washing one's hands of responsibility of the ultimate labor force and the conditions at the end of the labor supply chain.

All climbers need to be more involved and responsible, and "earn" their summit. The days of sipping coffee at base camp while Sherpas do much of the hardest and most difficult work at relatively little compensation should end.

The latest news is that most expeditions to Everest from the Nepal side of the mountain have been cancelled this year as a mark of respect for those who passed away and for grieving family members and loved ones. It is difficult for us to imagine how other expeditions can morally continue this year. For those expeditions still deciding on whether to continue climbing to so call "honour" members of the Sherpa community who lost their lives, here are our thoughts on how to genuinely honour them.

Show respect. Share the grief and show your support. Be generous and ease some of their financial burden - now that the only earning member of the family, in most cases, has passed away. Don't forget the sacrifices made by the Sherpas, those who died and those who survived. Now it's your turn - all stakeholders, including the Nepal government - to support and guide these broken families, especially the children.

Many friends and strangers have asked how to help. To respond to this, the American Himalayan Foundation based in San Francisco has established a Sherpa Family Fund, with 100 per cent of the funds raised going to benefit the families of those killed or injured. After the initial flurry of pledges though, the needs will remain.

One year ago, the Dhaka disaster focused international attention on the plight of Bangladesh's four million garment workers and their critical contributions and role in an industry that sews brand names for companies around the world. New light was shone on the low pay, abused workers and unsafe conditions that were the dark side of a key contributor to Bangladesh's economy.

Today, significant questions remain about whether promised government and private sector actions, including changes to factory safety as well as payments to some 2,500 survivors in the factory collapse have actually been made. What is clear, according to media reports, is that the Rana Plaza Donors Trust Fund, set up by labour groups and clothing companies to compensate victims is far short of its $40 million target having raised only some $15 million.

The Interfaith Centre on Corporate Responsibility has said it would call on companies to contribute more to the fund, in a push supported by more than 130 institutional investors.

A year from now there may well also be a flurry of media attention paid to what has happened to the families and more critically to the business of climbing Everest on the anniversary of this latest disaster. We hope for the best, but if assessments of Bangladesh a year later is our guide, we fear that not enough will change high in the Himalayas without continued pressure on government and on themselves by the leading individuals, foundations and companies involved in the business of mountaineering.

Dhamey Tenzing Norgay is the son of iconic mountaineer Tenzing Norgay Sherpa, and co-owner of Noble Traveller, a Bhutan-based travel company.
Curtis S Chin is a former US Ambassador to the Asian Development Bank and managing director of advisory firm RiverPeak Group, LLC