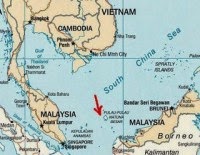 Malaysian Prime Minister Najib Razak has distanced himself from growing territorial conflicts in Asia, telling a Japanese newspaper that they should not jeopardize the “strategic importance” of his country’s ties with Beijing.


“We must look at the big picture and not define relations with China on a single-issue basis but look at the broad spectrum of the relations, and recognize the strategic importance of our bilateral relationship with China,” Najib told Thursday’s Nikkei.


“We do not want [the territorial] issue to be an impediment to the growing ties between Malaysia and China,” the Malaysian premier, on a visit to Japan, said in an interview with the business daily.

The comments come as Vietnam and the Philippines—which along with Malaysia are members of the Association of Southeast Asian Nations (Asean)—are embroiled in separate rows with China over control of parts of the South China Sea, which Manila calls West Philippine Sea.

Tensions remain high in the region after an eruption of deadly anti-China riots in Vietnam over Beijing’s controversial plans to drill for oil in contested waters.


Kuala Lumpur and Beijing have their own rival claims to parts of the South China Sea—believed to hold vast deposits of oil and gas —but Najib has played these down as he pursues closer ties with Malaysia’s top trading partner.

Najib’s government has also been trying to placate Chinese anger over the disappearance of Malaysia Airlines Flight MH370, two-thirds of whose 227 passengers were from China.

On Thursday, Najib said: “We should heed the fundamental principles in which good diplomacy is a conductor . . . sovereign equality, respect for territorial integrity, peaceful settlement of disputes, and mutual benefits in relations.”

He added that disputes over resources should be solved through “international law, not economic and military solutions.”

Najib on Wednesday held talks with Prime Minister Shinzo Abe in Tokyo, which has its own territorial dispute with Beijing.

The two leaders agreed that any issues including in the South China Sea should be dealt with based on “international norms,” according to the Japanese foreign ministry.