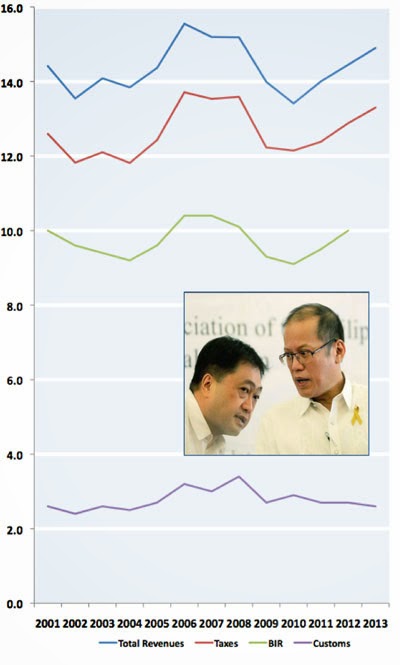 Yet still bragging about it: Revenues as percentage of GDP, still below Arroyo peaks.

Finance Secretary Cesar Purisma must be one of President Aquino’s biggest liars. There may be actually bigger ones, but the trouble with Purisima is that he even broadcasts his deceptions, and conceals his complicity in what could have been an economic meltdown in 2005.

Purisima is the biggest liar since he has been spreading the biggest lie that, through constant repetition, unfortunately many believe: that our economic growth in the past four years has been due to Aquino’s daang-matuwid government.

Purisima published in two mainstream newspapers at the start of the World Economic Forum for East Asia the other day his article “Good governance is good economics.”


He wrote: “Reforms have the power to alter a country’s economic destiny. This is why they inspire confidence from markets, businesses and citizens. The Philippines provides an example of how reforms can change perception and reality.”

That’s true of course. But then he goes on:

”Since assuming office in 2010, President Aquino III has transformed the country from being ‘the sick man of Asia’ to an economic success. He undertook reforms that economists have been urging and politicians shirking.”

Purisima can name only one: “[T]he Sin Tax Law, which increased taxes on alcohol and tobacco products…”

But that law took effect only at the start of last year. And how much did that raise government revenues? Just 0.4 percent of the GDP value, according to the World Bank’s most recent economic update released March 2014.

Aquino and Purisima’s—supervision over the country’s fiscal situation is in fact not something to crow about. They even pushed for the “sin tax law” in desperation in 2013, as revenues were not improving as expected.

True, revenue effort in 2013, was 14.9 percent, higher than the 14 percent in 2009, former President Arroyo’s last full year in power. But 2009 was the height of the global financial crisis that broke out in 2008, which hit nearly all countries, with the Philippines’ GDP growth rate slowing to 1.1 percent. The global economy has since bounced back from that crisis, with our own GDP galloping at 7.2 percent last year, yet government revenues haven’t increased significantly.

Why? Because other than the sin tax law, no other reforms have been undertaken. Purisima even failed to prod the two bureaus under him, customs and internal revenue, to collect bigger amounts.

Aquino himself had admitted that smuggling had become rampant under his watch that even rice and vegetables, were being smuggled. Finally, after nearly two years of media exposes and much public outrage, did Aquino fire his buddy Ruffy Biazon as customs head only last December.

For all of Kim Henares high-profile campaign against tax evaders, even shaming doctors and celebrities as well as running after boxing champion Manny Pacquiao, the BIR’s revenues rose only to an insignificant 10 percent in 2012, still below the 10.4 percent peak in 2006 to 2007, during Arroyo’s watch.

Yet Purisima claims the Aquino regime’s mediocre results in revenue generation are responsible for making the country an “economic success story.”

So why has our economy been doing fairly well in the past four years?

Quite significantly, obviously a nudge to Aquino and Purisma that says “Don’t brag too much,” the World Bank’s September 13, 2013 Philippine Development Report had a highlighted box entitled “Fiscal consolidation in the last decade led to macroeconomic stability. “

“Tax administration measures were initiated in the revenue agencies in 2003 and 2004, which slowed but did not stop the decline in tax effort . . . The deficit of the power sector increased sharply, from 0.2 percent of GDP in 2001 to 1.8 percent of GDP in 2004 and was as pressing as the national government deficits.”

“After the 2004 elections, the government began to address the fiscal crisis seriously. In August 2004, President Arroyo declared a state of fiscal crisis and asked Congress to enact a number of tax policy reforms that included raising excise tax rates on tobacco and alcohol and a Comprehensive Tax Reform Package. “

“This package included, among others, i) removal of exemptions from value-added tax (VAT) on oil, power, medical, and legal services, ii) an increase in corporate income tax from 32 to 35 percent, before reverting to 30 percent in 2009, and iii) authority for the president to increase the VAT rate from 10 to 12 percent in January 2006 upon satisfaction of certain conditions prescribed by law . . .”

“The reforms significantly reduced fiscal and macroeconomic vulnerabilities and brought back investor confidence.”

“Higher tax revenues permitted the government to increase real spending in 2007 for the first time in seven years. The improving fiscal balance, aided by a steep appreciation of the peso, helped trim down the national government debt to 54 percent of GDP by end-2007 and then to 50 percent of GDP in 2011.”

“The Arroyo Administration’s resolve to put its fiscal house in order was critical in bringing back macroeconomic stability.”

Together with its P330-billion stimulus package that responded effectively to the 2008-2009 global crisis, the Arroyo administration’s fiscal reforms strengthened the country’s economic fundamentals, which Aquino and Purisima are now foolishly and dishonestly claiming credit for.

Does anyone in his right mind believe that Aquino’s campaign to remove Ombudsman Merceditas Gutierrez and Chief Justice Renato Corona, which ate up his time and political capital in his first two years in office, and later to imprison Senators Juan Ponce Enrile, Jinggoy Estrada, and Bong Revilla strengthened the country’s economic fundamentals?

The episode over the Comprehensive Tax Reform Package, which was contained mostly in the Expanded Value Added Tax Act, exposes Mr. Purisima’s character. You judge:


Arroyo had spent almost her time and expended all of her political capital in early 2005 to push for the Comprehensive Tax Reform Program. I was still in Arroyo’s Cabinet then and within her inner circle, and several of us were intrigued by Purisima, who became finance secretary February 15, 2005 because of Mar Roxas’ intense lobbying.  But Purisima then didn’t seem be keen in pushing the tax reform program. It was Arroyo herself who was moving heaven and earth to have it passed, despite the very strong political and popular resistance against it.

Purisima tried to fuel anger against Arroyo by claiming that the E-Vat Law had triggered such a mass outrage against her that she ordered the Supreme Court to issue a temporary order to stop the implementation of the E-Vat law. (He was cited for contempt by the High Court and forced to eat his words.)

Purisima was one of the few people in the country who knew in much detail the depths of the country’s fiscal crisis at that time that required the E-Vat law. Yet right after its passage, he joined a conspiracy that added a political element to the emerging economic crisis.

If Arroyo had not pushed the E-Vat law or if Purisima’s Hyatt 10 conspiracy—that included the Liberal Party, Aquino, and his mother Corazon—succeeded in forcing her out, the country would have entered again another cycle of a fiscal crisis creating an economic crisis, resulting in a political instability and ultimately, as happened in 1986, a severe economic recession that would have thrown millions of Filipinos into poverty.


The E-Vat Law was finally passed in May 2005, which added fuel to the frenzy then against Arroyo. It turned out that Purisima was with the so-called Hyatt 10, who resigned on July 8, 2005 as part of a conspiracy to force Arroyo out.

Many thought that Purisima’s resignation would deliver the oust-Arroyo movement’s coup de grâce. While the market wouldn’t care much about the resignation of such officials as the secretaries for education (Abad) or social welfare (Soliman), it could panic with the finance secretary’s desertion. However, it didn’t, and his replacement Margarito Teves proved to be more capable than Purisima, and remained at his post five years until Arroyos term ended.

Most of us in the Cabinet, though, concluded that Mar Roxas had lobbied to put Purisima as finance secretary in February as some kind of mole,  so that his resignation five months later could have a devastating impact on Arroyo’s government.


What gall this Purisima fellow has to lie and claim that his fiscal management and Aquino’s leadership are responsible for economic growth in the past four years.
Manila times - FB: Rigobero D. Tiglao