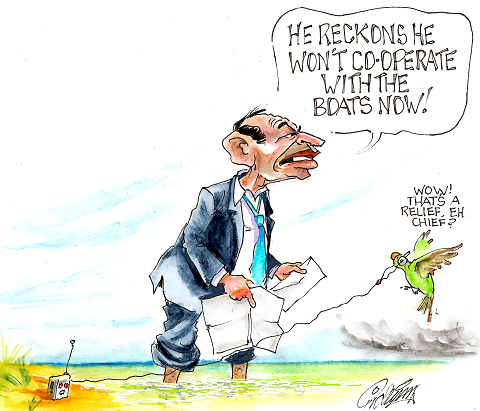 Why did Australian Prime Minister Tony Abbott cancel his visit to Indonesia?  The budget has been suggested. Bunkum! It’s because words in Australia’s proposed code of ethics have been lost in translation. Fortunately we’ve found them.

Thanks to certain unidentified whistle-blowers, this column can now reveal details of the top secret negotiations under way between Indonesia and Australia following last year’s spying scandal.

The outraged President demanded a new code of conduct between the nations before formal military cooperation could be reintroduced. Since then senior bureaucrats, etymologists, black-letter lawyers and spin doctors have been seeking the right words to resolve the impasse and soothe hurt feelings.

Here’s our exclusive — details of Australia’s response — which fell off the back of a becak (pedicab).

Ethical Code of Conduct (Draft 149a). Without prejudice.

Preamble: Australia will never, ever, cross our hearts, swear on the blood of our convict ancestors, spy again on our dear and most trusted best friends in Indonesia — unless it’s in our national interest, or we are instructed to do so by Washington.

Border respect: We pledge to acknowledge and respect the sovereignty and territorial integrity of our great neighbor.  We will never again cross borders without the gracious permission of the Indonesian government — unless our navigational equipment malfunctions.

No surprises: We will always notify you of any policy decisions we may or may not make from time-to-time before public release. However, we cannot be held responsible for any leaks published by the mongrel media causing you great embarrassment. This we will regret.

Disclosures: Should such leaks occur, we categorically pledge to launch thorough inquiries into the source (unless we leaked).  We will condemn the stories as lies perpetrated by unnamed mischief makers, traitors and unpatriotic journalists.  However, it must also be understood that we support absolutely the freedom of the press in a robust democracy.

Law: Should Indonesian slaughter men kick our cows, or customs arrest our drug mules, we will urge our citizens to respect Indonesian rules — even though we think they’re weird. Your laws, not our people. However, we reserve the right to interfere should the Australian electorate get annoyed to the point where our seats in parliament are threatened.

Disquiet: Australia will never knowingly use megaphone diplomacy or make inflammatory statements that insult Indonesia and arouse public disquiet — unless these are in our Machiavellian master plan. Which we don’t have.

Separatism: We will not tolerate Australian NGOs grandstanding on separatism in West Papua. No ifs, buts or maybes. We will contrive to be outraged and issue awesome media statements. See Clause 8.

Provocation: Should the Morning Star flag be raised on Australian soil, we will monitor the situation closely.  That’s our clear and unequivocal position.  We cannot yet control the opposition parties, the churches, NGOs and others concerned about alleged human rights abuses. About these we know nothing — unless revealed otherwise by WikiLeaks. Clause 7 will then apply.

Donations: We will give you orange lifeboats, patrol boats, Hercules aircraft and other military hardware that’s passed its use-by date. A condition of our generosity is that you do not remove certain specialized electronic equipment that may, or may not, have been installed.

Aid: Through the careful placement of our limited aid money and in close association with Indonesian ticket-clipping authorities, we will fund projects we consider appropriate through the archipelago to the great benefit of Australian contractors. This aid will continue, unless our domestic budget needs demand otherwise. For security reasons such information must remain confidential.

Denial: We will neither confirm nor deny the existence of this or any other draft document or briefing notes that may or may not have been prepared by rogue contractors, outside operators, over-imaginative journalists, casuals and interns unauthorized by the Australian government and without our knowledge.

Communication: A hotline will be established to rapidly resolve problems. Phone anytime during Canberra business hours. Otherwise leave a message. Your call is important to us and may be used for training purposes.

Penalties: These protocols shall come into force on a date to be agreed but not disclosed. It may or may not remain in force for an unspecified time.