The Mekong Decision Looms for Laos Dam, but Impact Is Unclear 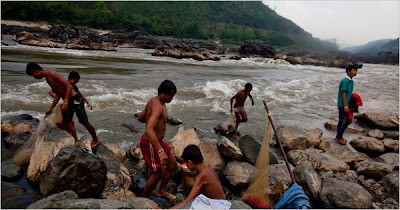 The Mekong River, teeming with hundreds of species of fish, has for centuries been the lifeline of villages in Laos and Vietnam.


HOUAY SOUY, Laos — The Mekong River is so brown with silt as it passes this impoverished village, it could be called liquid dirt. For millions of people downstream this is the color of life: the Mekong, teeming with hundreds of species of fish and rich in minerals, has for centuries been the lifeline of villages and towns stretching from the rocky rapids of Tibet to the lazy meanderings of the river in the Vietnam delta. 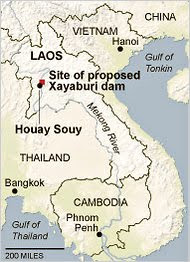 On Tuesday the four countries that share the lower reaches of the Mekong River will announce whether they agree to the construction of a controversial dam, a decision that could forever alter the character and natural diversity of one of the world’s longest and most bountiful rivers.

The proposed dam, known as the Xayaburi for the province in Laos where it is located, is a test case for a 1995 agreement signed by Laos, Thailand, Cambodia and Vietnam to share the river’s resources — its fish, water and the minerals carried by the silt that fertilize the soils of places like the Mekong Delta. The agreement, which called for a process of consultation on actions affecting the river, was seen as a major step toward greater cooperation for countries that a few decades ago, during the Vietnam War, were often at odds.

But Laos appears to be undermining the spirit of that cooperation. All four countries retained the right to build dams with or without agreement by neighboring countries. And here at the proposed site of the Xayaburi Dam, work has been under way since November. The area is teeming with trucks and hundreds of workers who have cleared an access road, built barges and set up concrete mixing facilities.

China, which was not part of the cooperation agreement, has already built four dams closer to the river’s source. Yet the dam in Laos is considered by many as pivotal because it could affect fish migration patterns and kick off the construction of at least five other dams already slated for the lower reaches of the Mekong.

Studies by experts on Xayaburi’s environmental impact are filled with apprehension and criticism, doubts that may be the seeds of future conflicts between countries sharing the river.

Senator Jim Webb, a Democrat from Virginia who heads the Senate’s Subcommittee on East Asian and Pacific Affairs, last week criticized the dam project for what he called a failure to meet international standards. He predicted that a lack of coordination between the countries that share the Mekong would have “devastating consequences.”

“The United States and the global community all have a strategic interest in averting regional conflict by preserving the health and well-being of the more than 60 million people who depend on the Mekong River,” he said in a statement.

The news media in Vietnam, which normally hew to the government’s line, have been unusually critical of the project. Farmers in the Mekong Delta fear that an accumulation of dams on the river could reduce the volume of water that reaches Vietnam, exacerbating the problem of saltwater seeping into farming areas from the sea.

A report published by the head office of the Mekong River Commission, the organization set up to coordinate dam projects on the river, described “fundamental gaps in knowledge” about how migratory fish would be affected by the dam. Experts hired by the commission estimated that the dam would curtail the migrations of anywhere from 23 to 100 species of fish. It described as “ineffective” a device proposed by the Thai construction company carrying out the project to allow fish to bypass the dam. And it said there was a “strong possibility” that one of the river’s most distinctive species, a giant catfish that can exceed the weights of several full-grown men, would become extinct.

But perhaps most striking is the commission’s estimate that the dam’s ability to produce electricity will be severely compromised within a few decades because the dam’s reservoir will fill up with silt. (The plan calls for a generating capacity of 1,285 megawatts, enough to power a small or medium-size city; most of the electricity will be sold to Thailand under an agreement already signed between the dam’s builder and a Thai utility company.)

“It is expected that under proposed operating conditions, the reservoir would effectively lose about 60 percent of its capacity due to sedimentation after 30 years,” the commission’s report says.

Thus, critics say, the dam will have permanent consequences for life in the river, including possible extinction of larger species, but may only produce several decades of electricity.

The Laotian government has responded to questions and criticisms about the dam with a stout defense of the project. The dam, which is situated between steep hills and will span a distance of about eight football fields, will have the same impact as a “natural waterfall,” the government said in response to the report by the Mekong River Commission.

Embracing hydropower will alleviate the need for “big power plants which cause a lot of pollution,” the government said. “Hydropower project development which is a green energy shall be strongly promoted and supported,” it concluded in its response.
Landlocked and sparsely populated, Laos is counting on revenues from hydropower to help lift the country out of poverty and finance government programs.

The government says it plans to become “the battery” of Asia with a total of 70 hydroelectric projects, 10 of which are already in operation. The Xayaburi Dam would take seven years to build.

CH. Karnchang, the Thai construction company carrying out the project, refused to allow a reporter to visit the proposed dam site. But it was possible to reach it by chartering a boat and walking several kilometers along the river bank.

In villages near the dam site people seem divided about the project. The government has proposed moving people who live in villages that will be flooded by the dam’s reservoir to a spot farther upstream and says it will provide electricity, which they currently do not have. But some villagers said they were told their new dwellings would not be along the riverbank.

“The government has already told us three times that we need to move out,” said Sripan Sukaew, a fisherman who lives in this village overlooking the dam site. “I’ve been fishing since I was born. This is better than working as a day laborer in Bangkok.” New York Times
Posted by Kerry B. Collison at 2:42 PM

Email ThisBlogThis!Share to TwitterShare to FacebookShare to Pinterest
Labels: but Impact Is Unclear, The Mekong Decision Looms for Laos Dam