China's People's Liberation Army (PLA) Daily ran a full page of articles recently to rouse the military and prepare its men for what it called a "war without gun smoke."

The six articles, published on March 29, were intended to refute, among other things, three core demands made by advocates of political reform in the military.

The demands call for:
• A neutral military, which does not take sides with any one political force;
• A military that is under the command of the state rather than the party, namely the Chinese Communist Party (CCP); and
• A professional military, which devotes more time to training than to political indoctrination of the rank and file. 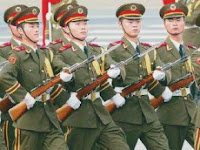 The tragic outcome of the 1989 Tiananmen crackdown on pro-democracy demonstrators had prompted reform-minded activists to push for the changes.

The CCP has never bothered - until now - to refute the demands openly because of their highly sensitive nature. Devoting a full page in the PLA Daily for this purpose now is a rare move on its part.

The move could suggest that the CCP, nervous after seeing the impact of people's revolts in several Arab countries and subsequent calls for similar rallies in China, deems it necessary to tackle this threat squarely.

An online declaration issued by the so-called Jasmine Revolution Committee of the Chinese Military on March 6, in which it urged Chinese soldiers not to open fire at protesters and not to obey orders to kill, also clearly made the CCP uneasy.

An editor's note accompanying the articles highlighted the importance of the impending ideological war. It quoted Karl Marx, who said that "the breakdown of ideology could lead to the demise of an entire generation," reflecting the CCP's paranoia.

It also said that China is facing "a tough ideological war being waged by animus forces with the aim of Westernizing and dismembering the country." Animus forces is a term usually reserved for the United States. Thus, for the sake of the party and the state, "the military has to step up its ideological efforts," it added.

It is interesting that the CCP has, for the first time, admitted inadvertently that the banned Falungong's rallying call to "Quit the CCP" has had some effect on the rank and file.

The Falungong, a spiritual movement banned in mainland China, urges military personnel to leave the CCP, which it claims has committed grave mistakes. The strategy is meant to weaken the CCP and armed forces from within.

In one of the PLA Daily articles, General Staff official Cao Baoyuan of the Shenyang Military Region recalled how his soldiers were approached by people persuading them to quit the military.

Besides the three core demands, the CCP views ideas such as pluralism as being detrimental to its well-being.

Reform advocates such as Li Rui, who was personal secretary to Mao Zedong, called for the current "one-party, one-leader and one-ideology regime" to be overhauled to accommodate greater diversity in modern society.

Such an idea seems to have an allure for young soldiers.

In another PLA Daily article, a political department official admitted that such thinking was popular among soldiers born after 1980, when China's reform and open-door policy took off.

The article said: "In recent years, more new-generation soldiers entered the barracks and became the main pillar of the military. Their thoughts, value systems and behaviors are more diversified, pluralistic and changeable. However, no matter how pluralistic value systems are, one ought to uphold Marxism as the sole guiding principle."

This suggests that the younger soldiers are more receptive to the three core demands for political changes.

It considers the Nobel Peace Prize for dissident Liu Xiaobo as a "stink bomb" hurled at China by Western nations. To the CCP, Liu's writings were highly subversive because he advocates a multi-party and federal system.

Even the concepts of a G2 and Chinamerica coined by Western academics are considered insidious. These are "beautiful traps that could lead China into assuming global responsibility exceeding its means," one article said.

The PLA Daily articles could be an attempt by the military to launch a propaganda war against the West.

In 2003, the PLA urged its three arms to be prepared for propaganda, psychological and legal warfare. It explained that with the advent of information technology, these three types of warfare, with their "soft killing power," could well affect fighting in the real battlefield.

The PLA Daily articles came two weeks after parliamentary chief Wu Bangguo, the CCP's No. 2 man after President Hu Jintao, advocated the five noes: no multi-party election; no diversified guiding principles, no separation of powers, no federal system and no privatization.

Taken together, Wu's emphatic five noes and the PLA Daily articles show that the CCP is not prepared to undertake any political reform that could cause the party to lose its grip on power.

Email ThisBlogThis!Share to TwitterShare to FacebookShare to Pinterest
Labels: China Prepares for 'War Without Gun Smoke'