Whaling and research: do we really need to know how to provide IVF to minke whales? 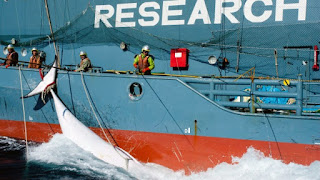 Japanese and Sea Shepherd boats are steaming towards the Antarctic. Will there be violent conflict? It's possible. Japan is adamant that it wants to continue killing whales in Antarctic waters. Sea Shepherd is passionately opposed.


Since 1986 there has been a moratorium on the killing of whales. However the International Whaling Commission allows that some whales may be killed for scientific research if that research is essential for rational management. In 2014 the International Court of Justice decided Japan's whaling was not justified for purposes of scientific research and ordered Japan to stop whaling.


In addition, the Australian Federal Court decided in November that Japan was in wilful contempt of breaching Australian environmental laws in the Antarctic Whale Sanctuary by killing whales there. A fine of $1 million was imposed on the company carrying out the killing, a company contracted by a Japanese government organisation, the Institute for Cetacean Research.


The institute put a new research proposal to the International Whaling Commission this year, but the commission rejected this proposal. So the law and international regulation oppose Japan's actions and yet the whaling continues.


Are the courts and the International Whaling Commission missing something? Is there some vitally important research that will be blocked if whaling ceases?


Japan does do research with the dead whales, rather than just eating them. Helpfully the Institute for Cetacean Research publishes a list of peer-reviewed publications each year. Some of these publications are "in-house", in Japanese and in local fisheries magazines. Some are in international scientific journals including The Journal of Reproduction and Development, Biology of Reproduction, Zygote, Marine Mammal Science, Cloning and Stem Cells and Comparative Biochemistry and Physiology.


Taking the publications from 2000 to 2015, by far the largest number is on in vitro fertilisation of minke whales. The second largest topic is genetics, but studies in whale genetics can be done from skin and poo samples. There is no need to kill whales for this research.


Why do minkes need to be killed to do IVF research? Sure, the eggs and sperm need to be harvested. But do we need to find out how to use in vitro fertilisation with minke whales?


It is not likely that in the future when most minkes are dead that a program will be initiated to produce more by IVF. This would be an extremely dangerous enterprise (for the humans involved and whales), extremely costly and unlikely to succeed. The research so far has produced negligible results and there is no discussion of the likely practical value in the research papers.


The benefits from the whaling can't then be in the scientific results or practical outcomes. However there are no simple economic benefits from the sale of whale meat either. The demand is not large and it is decreasing.


Another economic benefit lies in the generous subsidies that the research institute is given to continue whaling. The whalers are from provinces that provide important electoral support to the current government.


Legal, scientific and moral arguments against the Japanese whaling program have failed. A battle between whalers and Sea Shepherd is unlikely to lead to a happy resolution. The Australian government is considering sending monitoring aircraft and even returning to the International Court. Japan can ignore both. The presence of Australian naval vessels may provide a deterrent against violent confrontation but their mere presence is unlikely to stop the whaling.


The whalers are likely to return to the Antarctic whale sanctuary as that is where the whales congregate. Given the recent Australian court ruling mentioned above, it would be appropriate for the navy to issue the fine to the whalers in this sanctuary. This could cause a great deal of embarrassment to the Japanese government.


It is important that the Australian court decision should not remain hidden, filed away, costs awarded against the Japanese whaling company remaining unrecovered along with the fine.


Perhaps such an action would be enough for Japan to give up on a practice that has world opinion against them and no defence that is acceptable in law, in science or morality. Embarrassment is a strong emotion.


Waves of disappointment at the Japanese resumption of whaling have recently been expressed by Foreign Affairs Minister Julie Bishop and diplomats from France, Britain and China. Perhaps a joint delegation to Japan could also prompt a reversal given the international trade possibilities and maritime territorial disputes which could have a better outcome for Japan if the disappointment is dissipated.