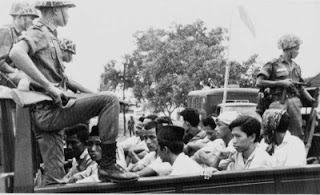 In October 2015, the Ubud Writers and Readers Festival cancelled the launch of three books containing testimonies collected from survivors of Indonesia’s worst political genocide of the 20th century. Why is discussing history so controversial in Indonesia?


50 years ago, some members of the Indonesian Communist Party (PKI) attempted an unsuccessful coup in Jakarta. The vast majority of PKI members had no idea of the coup, but the PKI as a whole was accused of preparing for the wholesale torture and massacre of its enemies. Barely a dozen people, including six senior generals, died in the Jakarta coup and related events, but the Indonesian rumour market turned these casualties into portent for Red Terror. In a retaliatory atmosphere described as ‘kill or be killed’, the Indonesian army led non-communist Indonesians in massacres that peaked from November 1965 until March 1966.


The West largely ignored the killings, instead focusing on the power struggle in Jakarta. In 1966, Major-General Suharto had pushed aside President Sukarno and established a military-dominated regime known as the New Order. 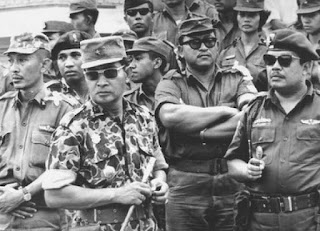 Suharto held power until 1997. His regime was marked by sustained economic development and improved welfare, deepening corruption, environmental destruction and a highly managed travesty of democracy — regular elections gave no possibility of changing the government. The regime was repressive, but it drew legitimacy from its economic performance and from its claim to have saved the country from communism. 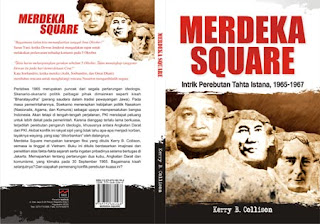 This claim required the regime to continue demonising the PKI. The image of communists forged in 1965 was inculcated in young Indonesians in sustained propaganda through the education system. The regime waged a shadow war on communism, banning the teaching of Marxism and limiting the civil rights of people with old communist links. There was no question of publicly challenging the official version of the events of 1965–66, let alone of bringing the perpetrators to account.


But during the final decade of Suharto’s rule, the regime’s anti-communist stance appeared increasingly outdated. The Soviet Union had collapsed and China had embarked unequivocally on a capitalist road. Many observers expected that Indonesia’s anti-communist rhetoric would evaporate with Suharto’s eventual departure. It seemed likely that the restrictions on Indonesians with communist links would be lifted and that a serious effort would be made to establish the truth of the five months of terror in 1965–66.


Yet, the retreat from anti-communism has been partial and hesitant. The few remaining prisoners were quickly released and the coordinated anti-communist propaganda was scaled back. Some civil rights were restored to alleged PKI associates. Activists began gathering testimony from survivors to ensure that there would be a record of the killings. They published books exploring unexplained aspects of the 1965 coup and detailing the experiences of survivors.


But the ban on Marxism remained in place and there was no question of an official acknowledgement of the genocide. School textbooks continue to identify the PKI as a whole as responsible for a plot to seize power, implicitly legitimising the killings as retaliation and precaution. Some, but not all, of the new books were banned.


In 2012, Indonesia’s official Human Rights Commission issued a detailed report on the killings based on four years of research. The commission declared the killings to be a gross human rights violation and urged the Attorney General to initiate a formal investigation as prelude to the prosecution of the perpetrators. But the Attorney General described the material presented as ‘inadequate’ and declined to take action.


Anti-communist civil society groups have also rallied to discourage and intimidate activists. They occasionally ‘sweep’ through bookshops, removing pro-communist books and burning them in the street. They would show up en masse at activists’ events trying to force them to disband. If the activists were stubborn, they threatened venue owners saying they would smash the property. For the most part, these anti-communist groups are Islamic and have been involved in other unilateral actions to uphold what they see as public morality.


In October 2015, the Ubud Writers and Readers Festival cancelled the launch of three books containing testimonies. The organisers of the festival — known as a defiant symbol of intellectual and artistic openness — were reportedly threatened by the powerful military intelligence agency that the whole festival would be shut down if the launch went ahead. To save the rest of the program, they agreed to cancel the 1965-related events.


Why is there such strong resistance in Indonesia to acknowledging the events of 1965 as a major crime? One important reason is the threat of prosecution. The killings were carried out mainly by young men, inside and outside the military. The possibility of being tried for their actions half a century ago is alarming and they are determined to stifle any movement in that direction.


Economic interests are also involved. Communists lost not only lives and freedom in the repression; they also lost property on a huge scale. During the killings, houses, agricultural land and businesses belonging to communists were expropriated. If the legitimacy of the killings were to be overthrown, then the legality of these expropriations would also be in doubt. Millions of dollars in assets is potentially at stake.


But above all, the killings have become iconic in the ongoing culture war over the identity of Indonesia. The moral authority of the army and that of Islam remain significant constants in the political process. Even without prosecutions or restitution, recognising the killings as genocide would be a huge moral defeat for the army that organised them and for the Muslim groups that took part. It would refute the army’s notion of itself as defender of the nation and challenge the view of many Muslims that their religion is defined by justice and mercy.


The war over historical memory is a stalking horse for a thoroughly contemporary contest over the soul of Indonesia.


Robert Cribb is a professor of Asian History at the College of Asia and the Pacific, The Australian National University.
Posted by Kerry B. Collison at 12:26 PM