The government has tried monetary stimulus, a stock market bubble, and now a bond market bubble. Nothing has worked.


China is closing out 2015 with probably the weakest growth rate in a quarter of a century. Unfortunately, 2016 will be more difficult. Financial bubbles have kept afloat unviable companies and speculative spending. But, as the renminbi comes under increasing devaluation pressure, the resulting capital outflows may deflate these bubbles despite the strong support from official propaganda.


Nothing reflects better China’s economic difficulties than the collapsing commodity market. After a 15 per cent decline in 2014, the CRB index dropped another 27 per cent in 2015. China-dependent iron ore has seen its price halved again in 2015 after halving in 2014, and the price of Brent crude is down by two-thirds in 15 months.


To extricate itself, China must develop a comprehensive plan to stabilise the economy, absorb cyclical losses and rebalance the economy 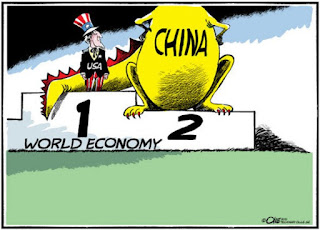 Financial markets have been hoping for a government stimulus to reverse the trend whenever disappointing numbers are released, even though such hopes have been dashed again and again for the past three years. The pattern is likely to persist into 2016. The government has tried monetary stimulus, a stock market bubble, and now a bond market bubble. Nothing has worked.


China’s economy is mired in a structural and cyclical quagmire. To extricate itself, China must develop a comprehensive plan to stabilise the economy, absorb cyclical losses and rebalance the economy. Piecemeal measures only increase confusion and dig a deeper hole for the future.


Playing with monetary policy just doesn’t work. It is intended to boost investment demand. But, with so much overcapacity everywhere, why would anyone want to add more? Instead, it destabilises confidence in the exchange rate. The resulting capital outflows are making economic management that much harder and may even precipitate a financial crisis similar to the 1997-98 Asian financial crisis. One lesson from history is that, when the financial system is precarious, don’t play with the currency value.


China may have overinvested up to 40 trillion yuan (HK$48 trillion) since 2009. Its physical manifestation is in empty buildings and industrial overcapacity. Several prominent steel industry executives believe the industry should produce 20 per cent, or 160 million tonnes, less per annum. On top of that, the industry is rumoured to have 200 million to 400 million tonnes of overcapacity. The dire situation is common among all commodity industries. New industries like smartphone manufacturing already have a large overcapacity. Even power plants are hugely underutilised.


To get out of the vicious spiral of China’s investment-led economy, the government must loosen its control on the economy, especially financial resources. Photo: AFPTo stabilise the financial system, the government must establish special teams to enforce capacity reduction and absorb the resulting bad loans. The inability to accept the financial consequences of past mistakes is a major barrier to meaningful economic reforms. In that regard, political decisions must be made on how to mete out punishment for past mistakes.


If the right reforms are instituted, the economy will boom for the next decade. If no reforms are carried out, stagnation, instability and crises await us


China’s overcapacity is a consequence of enormous forced savings due to government policies. Household savings account for less than half of net savings and a third of gross savings. As a savings glut exerts deflationary pressure on the economy, the government has tried to promote investment to support demand, which makes the future worse. This is the vicious spiral of China’s investment-led economy.


Declining efficiency and rising forced savings are two sides of the same coin. To get out of the vicious spiral, the government must loosen its control on the economy, especially financial resources. Government spending and that of state-owned enterprises account for about half of GDP. The level must come down by half for the economy to be stable.


China has enormous potential. Its labour productivity is comparable to that associated with per capita income of US$20,000, 2½ times the current level. The huge gap is to pay for the system’s inefficiencies. China’s current economic difficulties are entirely due to the inefficient governing system. If the right reforms are instituted, the economy will boom for the next decade. If no reforms are carried out, stagnation, instability and crises await us all. SCMP
Posted by Kerry B. Collison at 12:17 PM